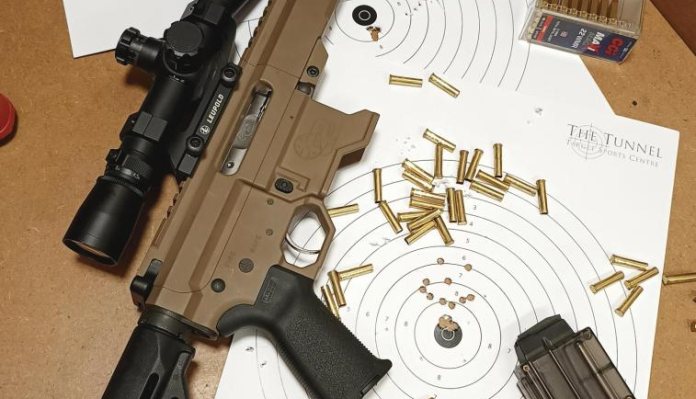 The .22LR cartridge was introduced in 1884 and for over a century it was a mainstay of farmers, small-game hunters, casual plinkers and square-range target shooters. Then came a revolution. In the 2000s, a spate of semi-auto replicas of military designs injected a healthy dose of fun, and provided a way to regain some of the excitement and dynamism that the rifle and pistol bans of 1988 and 1998 had sought to strip away from the shooting sports.

The combat-efficient combination of ergonomically-advanced designs, highcapacity magazines and rapid cycling that these replicas offered, opened the door to new fast-paced, close-range disciplines. It wasn’t long before one pattern of rifle rose to the top - the AR15. Grounded in the inherent genius of Stoner, Sullivan and Fremont’s design, its ascendancy also owed much to the rich ecosystem of aftermarket accessories and upgrades created for a platform that, in centrefire guise, was rapidly becoming both America’s favourite rifle and an icon of the ongoing struggle to preserve the freedoms represented by the Second Amendment.

Here in the UK, far-tighter legal restrictions compelled us to make do (notwithstanding the uplifting but alltoo- quickly-stamped-upon flowering of the lever-release system) with manually-operated centrefires: semiauto operation being synonymous with the diminutive .22LR. AR-style rifles chambered for the latter cartridge range from inexpensive German clamshell clones designed to be as mechanically distant from their centrefire counterparts as possible, to more-costly variants with maximum parts compatibility.

All good, but when in 1988 our lawmakers stipulated ‘.22 rimfire’ as the only permissible cartridge type for a section-1 semi-auto rifle, they had almost certainly overlooked the ‘other’ .22 rimfire - the .22 Winchester Magnum Rimfire (WMR), introduced three decades earlier, in 1959.

Projectile types are different, too, as the WMR uses the centrefire .224/.219” bore/land diameter instead of the rimfire standard of .223/.212”. This means that WMR bullets are genuinely jacketed, not just copper-washed, and are sometimes equipped with polymer tips. This results in slicker surfaces, more consistent profiles and sleeker noses. Surprisingly, manufacturers’ data suggests these advantages don’t always translate into higher BCs, with CCI citing 0.127 and 0.116 for their 40-grain TMJ and 30-grain V-Max 22WMR offerings vs. 0.130, 0.125 and 0.084 for their .22LR 40-grain copper-plated round-nose, and 40-grain and 32-grain hollowpoints, respectively. Nevertheless, the initial extra oomph keeps the WMR going flatter and further, ensuring a significant terminal effect downrange.

The WMR has struggled to find its niche, however. In the hunting field, the low noise levels and minimal meat damage of the .22LR, and the head-shot precision of Hornady’s .17-calibre magnum rimfire (.17HMR), put the WMR firmly in third place for use on rabbits, while on foxes it’s bested by any centrefire. That said, if you keep ranges to 125m or less, it won’t disappoint. I shot foxes exclusively with the WMR for some years on a patch of land I couldn’t get centrefire clearance for and don’t recall losing an animal.

The WMR has similarly fallen between two stools for competitive target use, whilst the venerable .22LR has found new homes in both short-range Steel Challenge events and long-range mini PRS/ELR series competition. Nonetheless, the no-man’s land between those two extremes is poised to be excitinglyexploited by t2, the new manufacturing arm of the Tunnel Target Sports Centre, potentially bringing about a renaissance for the WMR. More on that later.

Formed during the first COVID lockdown to put the enforced hiatus in range operations to good use, t2 has made a flying start, going from inception to completion of its first rifles in just 18 months. t2’s prospectus includes tasty straight-pull AR15-style centrefires in 9mm, .300BLK and .223/5.56, but I was most interested in their semi-auto .22WMR model, as it offers several core qualities previously unseen in rifles of this type and chambering, and in an entirely UK-made package.

The manufacturer does their computer-based 3D design in-house, has their receivers, handguards, bolts, etc. CNC machined by a local firm and sources their barrels from Sassen Engineering in Birmingham. Chambering, profiling and fluting are also performed locally, while the Cerakoting is done a few miles up the coast in Newton Abbot. As well as the polymer stocks and grips, some small parts are still sourced abroad, but t2 has set its sights on producing rifles that are 100% British by the end of 2022. As well as supporting UK jobs, this outflanks COVID and Brexit-generated supply problems, maintaining parts availability and keeping transport costs down.

Most commercial AR15 rifles are based on receiver forgings made in Taiwan, but t2’s policy of local production means these key components are CNC-machined from billet aluminium. This permits exceptional precision, contour-matched upper receivers and handguards, plus rapid design adjustments in response to feedback from testers and customers. For example, the original interface between the upper and lower receivers was so tightlytoleranced that the first guns couldn’t be reassembled after Cerakoting. No problem. A quick tweak to the CAD model and ‘voilà!’ a perfect post-coating fit!

There’s a lot more involved than copying existing designs, too, especially when it comes to crucial elements such as buffering recoil and feeding rounds. Like all rimfire semi-autos, the rifle uses a non-rotating, lug-less, blow-back bolt. However, uniquely, the t2’s is modelled on the original AR15 BCG and complemented by a classically-configured buffertube assembly. Each being carefully contoured, dimensioned and weighted to achieve the perfect balance of inertia and resistance on which any blow-back mechanism depends. This also means you can run a t2 bolt and buffer in a milspec receiver with a standard tube and spring. Consequently, the company will soon be offering WMR conversion kits for existing .22LR and centrefire AR15 shooters.

The next problem is to get rounds smoothly into the breech. The WMR’s long case and steep bullet-ogive don’t work well with conventional .22LR-style feed lips and ramps, so t2 have gone for a ramp-less approach, designing a new magazine that guides each cartridge straight into the chamber. Better still, the new magazines hold 30 rounds, twice the capacity of the generic Black Dog units used by other builders. Even more excitingly, a 60-rounder is in development, with promising results already achieved.

I shot a pre-production t2 WMR on the range at the Tunnel Target Sports Centre and was really impressed by the rifle’s heft, consistency and accuracy. The CNC’d handguard gives a monolithic feel, while the precise receiver-fit and well-balanced action make for ‘flat’ (low-vibration) cycling. Feed - even in this early example, and with Black-Dog magazines - was excellent, with just 2 misfeeds in 100 rounds. Accuracy, meanwhile, was so good that a string of one-hole 10-shot groups encouraged me to shoot a smiley face in the target! This can be attributed to the rifle’s excellent single-stage trigger as much as to its top-quality Sassen barrel.

Barrels come threaded ½”x 28 UNEF and in a choice of lengths, from 12.5” to 20”, although 18” is the most efficient. The test rifle was fitted with an unusual muzzle device, whose primary purpose was to ‘add drama’ to the report. Why? Because the company aim to recover some of the fun withheld from shooters by the post-Hungerford legislation of 1988, and to make maximum use of the ‘22 rimfire’ semi-auto exemption it included, by inaugurating a competition series centred on CSR-style courses of fire that will use WMR rifles out to 300m. At present, of course, those rifles would be made by t2, but there’s nothing to stop other manufacturers from following suit. Meanwhile, there are several other models in the pipeline, including semi-auto versions of the BREN LMG and L110A3 Minimi (box-fed), as well as an L1A1 SLR!

Currently, the AR15-style WMRs are being made to order and sold exclusively through the Tunnel Target Sports Centre. The standard configuration sports a ‘Battle Grey’Cerakote finish, Magpul furniture and an 18” chrome-moly barrel, complete with A2 flash hider. Plus, mil-spec pins, buttons and levers. The rifle is smartly presented in a rugged ABS case. Additionally, a wide range of custom configurations is available at extra cost.

Customers are encouraged to collect their rifles in person and offered an hour of free range time for testing and zeroing when they do so. The company is also scheduling ‘build days’, when for £200, the in-house armourer will coach them through building and maintaining their new guns. It’s great to see a manufacturer so dedicated to establishing and maintaining close contact with its customers, and to fostering a user community in this unique way.

In conclusion, t2 are lining up the ducks for a full renaissance of the .22WMR cartridge, with some great rifles, and great plans for a community of competitive users. I’m eager to see what the future holds for this exciting new British brand.