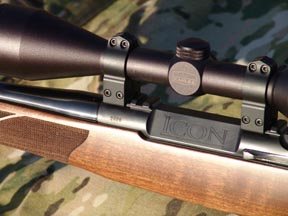 For more years than I can remember Thompson Center (T/C) has dominated the single shot, hunting rifle and pistol market in the USA with their Contender and Encore designs. I have to say that it never occurred to me they would ever make a bolt-action repeater, but now they have and it seems to be causing quite a stir. Called the Icon it seems to have taken every good idea in long guns and blended it into what might be considered the ultimate, off-the-shelf hunting rifle. A bold statement but a valid one too, just check out these build features:

Not a bad list, I think you will agree? Plus as well as offering the Icon in 22-250 Rem, 243 and 308 Winchester, T/C in conjunction with Hornady have come up with a new calibre - 30 TC, which is like a short 30-06. I have asked Hornady for some ammo and hope to be testing out the 30 TC as and when… But for our market I reckon these three standard cartridges have it covered, though 223 Rem would have completed the set nicely!

The Icon is a well presented and traditional looking rifle that on the surface belies its technical build. It also put me in mind of another make, yet initially I could not put my finger on it. The walnut stock is of good quality with 20 lines per inch chequering panels that offer a decent grip. The butt shows a low/straight comb with an angled pistol grip and a slim rubber recoil pad. The tapering forend offers a hand-filling hold and, as ever, QD sling studs are fitted front and back.

The receiver is all-steel and machined from solid. It has a closed-topped build that’s ‘dished-in’ on the left side (again familiar) and the integral Weaver bases are a stroke of genius, making scope mounting very user-friendly. The blueing is nicely done, though the action is semi matt, whereas the barrel is shiny; not sure about that… The bolt is a big, solid, 3-lug design with a cocked action indicator pin at the rear. A T-slot extractor is incorporated into one of the locking lugs and the case head is fully supported. There’s a spring/plunger ejector, so no matter how fast or slow you cycle the action the cases comes out every time.

The bolt body has a jewelled (engine-turned) finish and the handle is a sort of hybrid, German, butter-knife style, which I have to say I didn’t care for! I found that it came up a tad short in the hand and the lack of ball end made it feel a bit odd. However, T/C have made this piece removable and are offering alternative styles, so hopefully something more practical will be on the table. The bolt is easily stripped - a tool is provided for the purpose - and the job takes seconds.

The bolt release catch is on the left of the action and shows as a push-in latch. On the right rear is the 2-position safety – push forward FIRE (red dot exposed) and reverse for SAFE (red dot covered). The action can be cycled cocked or not with the safety on, but T/C have also included a separate locking lever that is automatically disconnected as you push to FIRE position.

The trigger is factory set for a break of 3-3.5 lbs, but can also be easily adjusted with the tool provided. This connects with a grub screw at the top of the mechanism that can be accessed with the bolt removed. Overtravel and sear engagement can also be altered, but frankly you don’t need to be messing with them, as from the box what’s on offer is very good, with a clean and firm break. Out of interest I had a fiddle and dropped the pull to 2.75 lbs, which I found just that bit better for me.

The trigger guard/mag well housing is aluminium alloy and the 3-round magazine is plastic. The mag catch is at the front of the well and pressing it causes the clip to pop out courtesy of springs, so just be aware of that if you’re standing in the long grass or up a high seat. The trigger blade is slim and vertically grooved and I would have liked a tad more width to it.

Of particular interest to me was the method of bedding, as T/C say there’s an integral aluminium block (Interlok) inset into the stock’s action void. Taking the rifle apart shows a thick, full-length alloy plate screwed into the timber. The base of the receiver is flat and shows three recoil lugs that engage with cut-outs in the plate. This is similar to what Sako have done with their Model 85, though in the case of the Icon it’s not just at the front but all along the length of the contact surfaces. Which looks to be a far better idea in my opinion!

It was then it occurred to me that the Icon bears more than a passing resemblance to the Sako 85 with a number of similar features – action style, magazine, safety and bolt removal systems, stock/chequering and bedding. In other areas it differs but there is a recognisable theme running through the whole design… Which is probably a smart move, as the Sako 75 and 85 are popular rifles in UK and Europe and doubtless in the US too. So to offer something similar with an American twist could be a highly effective recipe for success! We shall see…

The Icon came with a test target that showed a group measuring 0.620 x 0.590” @ 100 yards, which is pretty good; this was with Hornady 155-grain ammo. Unusually the holes are printed on the paper and not actual, this is due to the fact T/C use a computer-aided, acoustic targeting system. I chose two weights of ammo – Winchester 150-grain Ballistic Silver Tip and Federal 180-grain Premium (JSP), which are very much the two weights for this calibre. Quite often I have found that rifles will tend to favour one of these. I scoped up with a Kahles 3-10x50 CT in Warne mounts, with a Harris BRS bipod up front.

The overall feel of the Icon is pleasing, with the exception of the standard bolt handle, which I found too short with nothing to get hold of at the end, but this is curable as I have mentioned. Head/scope position is good, as is the safety catch location. The trigger is sweet though I would have liked something a bit wider, but could certainly live with it as is. As always a detachable magazine is worth the effort and, though a sporter, the barrel profile appears just a bit wider so might stand heating up a bit better.

Testing was done at 100 yards. Touching off the first round showed the usual 308 Winchester snap, but the Icon seemed that bit more controlled. Accuracy was good with the Winchester 150s printing around the .75” mark. Not factory spec, but more than pleasing off a bipod on a cold and windy December day and certainly capable out to 300 yards plus if required. I reckon that my tried and trusted 308 recipe of 44-grains of Vit N140 under a 168-grain Hornady A-MAX would have shot very well too. The 180s were a different story with groups opening up to around two inches, my old Riflecraft LSR was like that as it too did not like this bullet weight, yet is could shoot ½” with 150s and 168s.

Feed and function were 100% with the rifle showing a smooth action throughout; I even started to get on with the bolt handle, though I look forward to seeing what T/C have to replace it! Generally speaking I have to say that I was most impressed with the Icon and consider it a cut above the norm. OK, at a fiver under £1000 it’s not the cheapest rifle out there and it should be able to shoot, which it does. But build quality is good, as is the innovation of design and out of the box accuracy more than acceptable.

It would seem likely that T/C will be pushing the Icon, so like their Contender/Encore centrefires and R55 rimfires, I assume we will be seeing alternative stock materials, heavy barrels, stainless and maybe even camo options as well as more calibres.