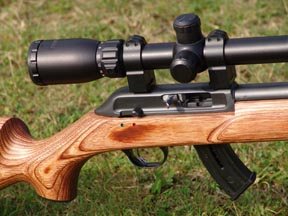 Since the majority of shooters re-discovered the Ruger 10/22 after the handgun ban, this basic little rimfire semi has pretty much dotted all the ‘I’s and crossed all the ‘T’s from a fun plinker to Action tack driver. Due to its popularity, the 10/22 is often seen as a blank canvas from which you throw at least 50% away and add better components to suit your needs.

Probably one of the growth areas is that of a heavy barrelled Action/precision-style rifle, but when you consider what you need to do to turn the standard 10/22R into such a machine then looking around shows other, readymade alternatives. Such an item is the Thompson Center (T/C) R55 Benchmark, which is part of a whole family of rifles all based around a common chassis. The original was called the 22 Classic and as the name suggests it was a well made, general use plinker/hunter. With good woodwork and an all-steel action the Classic was how rifles used to be made! The example I tested was accurate and the most reliable .22” self-loader I have ever used.

The Benchmark as the name suggests is primarily aimed at the shooter who wants the apparent advantages of a heavy barrelled/target-orientated design. That is not to say this rifle could not be put to other duties, as it’s reasonably short and I can see some getting it threaded for a moderator for bunny bashing chores.

As can be seen the Benchmark is a striking looking rifle with its brown laminate stock that shows a high combed butt with roll over cheek piece. The pistol grip though angled provides a nice hold and finger position for the firing hand with its 13.75" length of pull. The forend is flat, wide, and free floats the barrel, and there are finger grooves along its top edge. This is a nice piece of design for rested work as you have a good base to shoot off. Front and back are QD studs so there’s readymade fitments for sling and bipod use.

The barrel is 18” long and of medium/heavy profile, so you have a reasonably short but rigid tube, while up front is a recessed, target crown. The all-steel action is drilled and tapped for bases, which T/C can provide, but there are no iron sights. The action cocks on the right and uses a well sized and slightly curved handle for the purpose.  As standard there’s an automatic last round hold open system, which can also be manually applied by sliding a finger up into the magazine well.

Feed is by 5 and 10-shot single column magazines, with the latter spoiling the line of the rifle, as all clips of this type tend to do. To the rear of the large, ejection port is the safety catch. This consists of a 2-position rolling lever that pushes forward for FIRE (red dot) and reverses for SAFE (green dot). The trigger is non adjustable but from the box broke at a decent 4 lbs.

I fitted the Benchmark with a Hawke 6-24 x 44 Mil-Dot scope in 1” Warne rings. I tried a cross section of ammo from sub-sonics up to high velocity, which with a semi-auto will allow me to assess its reliability. Shooting was off a Dog Gone Good field bag.

Starting off with Eley sub-sonic Xtra the rifle was not too keen on them, showing a number of feed stoppages. I switched to Remington subs with the same results, which lead me to conclude that the action was perhaps a bit strong for them. Moving up to standard then high velocity fodder I had no problems at all.

Having shot the 22” Classic version, which cycled subs to HVs with equal favour made me think that the barrel might be a bit short for these low powered rounds, in conjunction with a reasonably strong return spring that the rifle showed. This might be cured by fitting a moderator, as the back pressure might be increased a little. However, T/C have not primarily designed the Benchmark as a hunter, so I stuck with the standard and high velocity ammo.

At 50-yards the Benchmark was knocking in ½” groups and doing near as well at 100. The 4 lb trigger, though a tad heavy for my liking gave a crisp and readable release every time. The general butt shape offered a comfortable eye/scope line up, while the high comb and roll over cheek piece gave good stock weld. Though the flat/wide forend works well shooting off a support it’s slim enough to be used off hand too.

The safety catch is well positioned and I did like the automatic last round hold open, as all you need to do is pop the empty, slap in a full one and pull back slightly on the cocking handle to chamber. The magazine catch consists of an angled, push-up blade at the front of the trigger guard. With the 10-shot clip this allows you to grab the mag body with your supporting hand, press the catch with your thumb and pull it free.

I see the Benchmark as a more range-orientated tool that will give good, out-of-the-box performance. So no need to mess with the trigger mech and controls, replace the stock or fit a new barrel as you would have to with a 10/22. Having now shot both I have to say I still prefer the across the board ammo reliability of the 22 Classic…