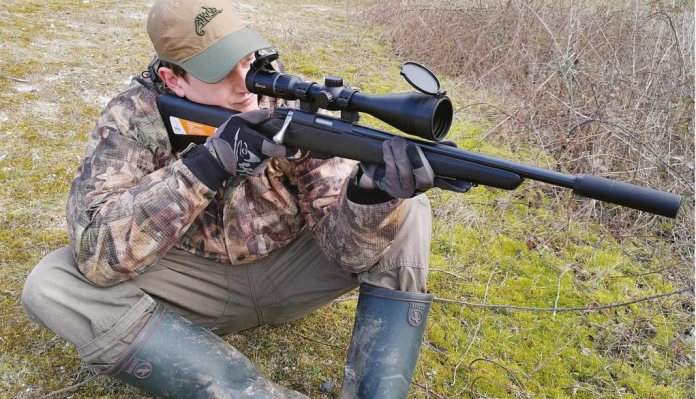 I have tried out various Tikka centrefire (CF) rifles in the past and have always been impressed with their out of the box accuracy and build quality, which stems from their extensive rifle manufacturing experience. So, when I heard that they would be putting the same effort into building a rimfire, I was particularly keen on trying it out! I have had to wait a while since it was released, but I have finally got my hands on a T1X MTR (Multitask Rimfire) chambered in .17 HMR (Hornady Magnum Rimfire).

Tikka has given the T1x action exactly the same footprint as its larger centrefire brother. This is a clever move, as it means that the rifle can fit into any custom stock suitable for a T3x, which includes chassis systems. This makes it ideal for those shooting competitively in disciplines like Precision Rifle, who use cheap-to-feed rimfires to practice with and also to compete in the smaller calibre league. The T1x is available in .22LR or .17HMR with either a 20” or 16” barrel, with my tester coming with the latter. The cold-hammer forged tube is described as having a cross-over profile, which provides the benefits of being heavier without much added weight. It starts out at the receiver with an approximate 23mm diameter and finishes at the muzzle with 19mm. It came threaded ½ x 20” UNF and includes a protector.

The action includes a smaller 1.5” ejection port with a gas escape hole on the right hand side. It has a quality finish and shows 11mm dovetail grooves 124mm in length for mounts and includes four screw holes for attaching an aftermarket Picatinny rail for more mounting options. On disassembly, I found that the action is secured by two screws and that the metal recoil lug is fitted within the stock, which lines up with a slot in the base of the action for a solid fit. In front of this they have added a 3” polymer spacer, which is there to compensate for the T1x’s different dimensions when compared to its larger brother, the T3x. It is only after this that the barrel becomes free-floated.

In order for the rifle to operate in CF stocks, Tikka have attached a magazine box along with a plastic, sprung release catch to the underside of the receiver, which sits in a recess on the standard furniture. Once fitted into a chassis system, this box would be hidden by the larger mag well, whereas on a replacement sporting stock it is just a case of swapping out the CF bottom metal for the original rimfire version. Simples!

The non-rotating bolt can be removed using the full size release button located rear/left of the action. It is manufactured from stainless-steel, including the handle, which is 45mm long and includes a 19mm diameter knob. This is hollow and secured in place with a hex screw, so that it can be easily removed and swapped for a variety of different designs. In use, it has a 45° lift angle and a 1.5” rearward throw, making it particularly fast, smooth and enjoyable to operate. The bolt face shows a single claw extractor one side and a slot for the ejector on the other, which works in collaboration with a fixed spring located in the action wall. This system is much like Sako’s Finnfire and proved reliable and efficient at kicking the brass out.

The MTR is fitted with a black, injectionmoulded synthetic stock that includes 35% fibreglass. This addition helps to increase rigidity, therefore maximising accuracy and performance in all weather conditions. Overall, it has a solid feel and Tikka have added a foam insert to fill the void in the butt and included front and rear QD sling studs. It shows a length of pull (LOP) of 13.75” including the rubber recoil pad my tester came with. Looking through their spare parts catalogue, it looks like spacers can be purchased to further increase the LOP.

The stock is a modular design, making it compatible with the same accessories that fit the T3x. These, including a choice of two interchangeable pistol grips, a standard sporting one (featured) and a vertical version, which is more suited to shooting from the prone position. Both include some aggressive asymmetrical chequering, to help improve grip in adverse weather. To swap them out, undo a screw at its base and it slides off. The forend shows a semi-flat shape and also includes strips of effective chequering on each side. If some additional width is required, then Tikka offer retro-fit horseshoe expanders, which attach to the existing furniture using a single bolt and the front QD sling swivel. Both accessory types are available in black, pure orange, coyote brown, stone grey and olive green for those who like to be different!

The trigger is the standard, single-stage, adjustable Tikka unit, which has an excellent reputation. With the action out of the stock, the weight can be adjusted using a hex key, but I found no need to, it was great from out of the box, with a crisp break and no discernible creep. It includes a wellproportioned 7mm wide grooved blade, housed in a guard large enough for a gloved finger. There is a 2-position safety catch, located to the rear/right of the action, which is quiet in operation. It pushes forward, exposing a red dot – for FIRE and rear - for SAFE and bolt lock, which is a nice touch. They have also included a red cocked action indicator, which protrudes from the rear of the plastic bolt shroud, easily seen but not to feel. Feed was from a solid, well designed, 10-round polymer magazine, which includes a large baseplate that protrudes from the well, making mag changes quick and easy. It functioned flawlessly with a variety of ammunition and complimented the smooth bolt-action.

Shooting from the bench, I quickly zeroed the rifle at 50 yards and shot some 5-round groups, with the Federal setting the benchmark with an easily achievable 0.58” group. This was promptly beaten with an impressive 0.31” group from the CCI, which produced an average velocity of 2437 fps from the 16” tube compared to the on-the-box speed of 2550 fps. I repeated the test at 110 yards, with the Federal achieving a 1.2” group and the CCI 0.79”.

On a somewhat breezy day, I got the opportunity to hit some steel at 25, 50 and 100 yards from various shooting positions, such as off the bonnet with/without a bipod, kneeling supported and unsupported standing. I quickly found the rifle with its short 16” barrel easy to manoeuvre, quick to setup and, when combined with the 17 HMR, highly effective! In an attempt to find the rifle and calibre’s limits, I tried 164 yards in breezy conditions, with the little Tikka providing some solid rabbit shooting performance.

I found the limit at 218 yards with the wind making things particularly difficult, not helped by the simple scope reticle and lack of splash from the little 17-grain projectile! the 20” barrel would probably help a little under these circumstances, providing approximately 150 fps of extra velocity from the same cartridge, every little helps! On the same day, I got the opportunity to see the performance of the 16” barrelled .22LR version at the same distances, including 218 yards. Here, my friend managed to achieve consistent hits on a 4” gong, impressive stuff. Either way it is clear the baby Tikkas possess the ‘right stuff’ when it comes to accuracy!

Throughout this test, the rifle has not skipped a beat, the action is smooth and efficient, showing no hesitation when chambering a new round. I particularly like the 45° bolt lift angle, which is a real perk and, when combined with the excellent trigger, really does make it a pleasure to shoot. The stock is solid and functional, and the ability to change parts over or even swap it for aftermarket offering is a huge plus, especially for me, as I always need extra LOP! Finish and build was true to Tikka’s reputation, with it feeling like a centrefire rifle. Overall, the design is well thought out and executed, with some serious performance to match. The icing on the cake, however is the price; at just £645, the T1x has to be one of the best value rifles I have tested. Thoroughly recommended!