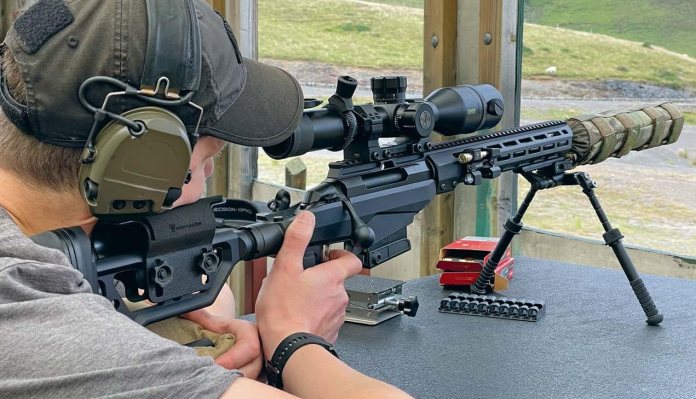 The Tikka T3X TACT A1 has been around for a while now and has a reputation as a great rifle, which is why I think it has not been updated since its release, other than the Coyote Cerakote finish option. As a consumer, there is always a strong pull to the latest rifle, however, there is a reason that this Tikka has not been changed - it is still excellent.

There are loads of reviews already out there for the TACT, so, stepping away from the normal gun test format, and having used the rifle for over a year now, I thought that I would take you through some smaller details, my experiences and the accessories that I have added to it.

When it comes to long range shooting I am a huge fan of chassis systems, and there are two main reasons why. Firstly, they offer tonnes of adjustability. It’s important to be absolutely comfortable behind a rifle, especially when trying to print small groups or shoot at long range targets. To help adjust the Tikka to your specific requirements, it comes with a heightadjustable comb and butt pad, as well as the ability to increase the length of pull (LOP) using spacers. It also comes with a folding butt stock, which makes transportation a doddle. Secondly, a chassis system perfectly mates with the barrelled action and can be torqued up tightly, ensuring precision and consistency down range.

In use, the TACT chassis does everything that I need it to do, but there are some points to consider. For example, the forend is a tubular AR-15-type that includes a length of Picatinny along the top. This lines up with the Pic rail used for scope mounting on top of the rifle action, giving the user the ability to attach accessories ahead of the scope, like NV. A consequence of this is that the scope rail is not inclined (0 MOA) and this means that if you want to maximise the available adjustment of your chosen optic, then you will need inclined mounts instead, which are a lot more expensive! Oh, and you will probably need high mounts as well to ensure the scope’s objective clears the rail. I went straight for a Tier-One longsaddle monomount with 6 MIL inclination, giving me the ability to push past 1500m, if necessary.

The advantages of this type of forend must not be ignored though. Not only does it offer 360º protection for the freefloating barrel, but it also helps combat heat haze in front of the scope’s objective. It also shows M-LOK slots all over, including at 6 o’clock. These can be used to attach weights (to adjust the balance of the rifle) or a length of Picatinny / Arca-Swiss rail for a tripod or bipod etc.

Noteworthy is that to remove the barrelled action from the chassis, the bracket that the forend secures to needs to be unscrewed. Not a big deal, but if you regularly shoot in adverse conditions and need to dry everything, then disassembly will take you longer than some other rifles.

The rifle comes with an AR- 15-style pistol grip that can be swapped for any design you fancy. I opted for the palm filling, Ergo flat top tactical deluxe grip, to match up with my other chassis rifle.

In the pursuit of tiny groups, I found myself looking at the butt of the rifle, where there is only a small amount of surface area that comes in contact with a rear support bag. Plus, the available area is at two different heights, which is not ideal. So, to keep recoil in line, I opted to replace the small piece of Picatinny rail at the base of the butt (can be used for a monopod) with a Mountain Tactical bag rider. A simple and very effective accessory. I also added a Hoptic USA cheekpiece saddle blanket for a bit of extra comfort.

When taking into account the price point, the T3x action is considered as one of the best factory rifle actions out there. The push-feed bolt runs smoothly and precisely, making it a pleasure to use, and it is this quality that attracts so many shooters to the brand. One hiccup for me is the fact that the TACT feeds from Tikka’s own 10-round detachable magazines, which are a little pricey at around £100 each! This is a shame, as multiple magazines are often required for competitive shooting, and that is why most chassis systems use AICS compatible mags, as they are readily available and significantly cheaper.

Calibre options are .223, .308, .260 and 6.5 Creedmoor. I chose the latter. It shows a 24” tube with 1:8 twist, that’s threaded 5/8-24 UNEF for a brake (supplied) or a moddy. I opted for a Wildcat Predator 12 moderator, which shows a reflex design and once fitted, extends down to the tip of the forend. This not only positions the balance point for the rifle just in front of the mag well, but it means that when combined with my Praesidia moderator cover and the forend, heat haze is basically eliminated – Nice!

The trigger is a highly competent, adjustable, 2-stage unit. In theory, it can be adjusted through the magazine well, but I found it easier to adjust with the barrelled action out of the chassis. I soon had it set at a nice weight and it’s a joy to use. No complaints. The safety is good too, offering forward for FIRE and rear for SAFE with bolt lock. There’s even a button to unlock the bolt for unloading while on safe.

Since getting the rifle out of the box, I have primarily been using 130-grain match ammunition from Norma. It has proven itself in a wide selection of review rifles and it hasn’t disappointed in the Tikka. I like to use factory fodder for the first 200 rounds in a new rifle anyway, as the behaviour of the barrel changes during this time, making load development for a reload pointless. It also means I end up with some nice once-fired Norma brass! Saying that, I have ended up just continuing to use the match ammo for long range shooting, while at the same time experimenting with reloads.

After around 200 rounds, at 8°C, the Norma ammo averages 2736 FPS and shows an extreme spread in the mid-20s. At the time, this seemed a little bit slow for this particular ammunition, but after a bit of research, it became apparent that Tikka barrels are known to be a bit slow, but make up for it with accuracy! Shooting multiple 5-round groups with the Norma, the average size came in at 0.5” @ 100m.

With this basic data to hand, I headed off to Chobham Ridge Range (Bisley) to confirm my drops. Here, a wide selection of steel targets sit in the safety area behind Stickledown, positioned from 130 to 900+ yards. It can be a tricky range because it’s very difficult to spot misses as the distances increase, as there is no sand or loose soil around the targets! However, I did manage consecutive hits on the 900+ yard targets, so my data was obviously good.

The next range on the list was Orion Firearms Training, which I have visited on multiple occasions. I enjoy going because of the massive array of targets and the various firing points that can be used. Here, you can easily stretch the range to circa 1400 yards, depending on the weather etc. Also, crucially, the vast majority of the targets have splash zones, so that you can see your misses and make corrections.

Using my proven data from Chobham, I was able to finetune it at Orion. This gave the confidence and the ability to hit a couple of clay pigeons and a steel rabbit silhouette one after the other at around 800 yards. All done with a factory rifle and ammunition. Not bad!

So, what did I achieve with reloads? Well, I have been using two different loads. The first with RS62 and 139-grain Scenars, and the second with 130-grain Sierra TGKs plus H4350. I managed multiple groups under 0.25” with both loads, but it was the TGKs that impressed me the most. While using the optimum charge weight process for my load development, I watched as the Tikka printed groups around the 0.5” mark for every charge weight in the test!

Considering what I use the rifle for, I would love to spec a 26” tube with a heavier profile, as I found the standard tube gets hot quicker than I would like. However, overall I have been seriously impressed with the TACT A1. The quality of manufacture is excellent, it’s a pleasure to use and the performance makes me grin. So, if unsure what to buy, just get the Tikka. You won’t be disappointed.