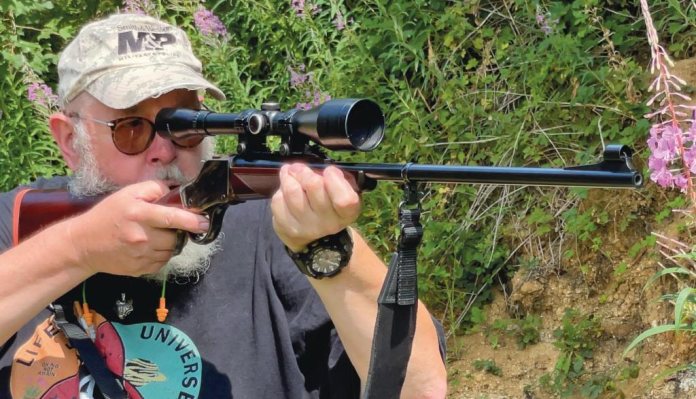 Uberti is well known for their excellent reproductions of firearms of the American, old west period, with such notable designs as the Winchester 1866 and 1873 lever-action rifles, Colt Model P and Schofield revolvers, to name but a few. In amongst all these repeating arms is a single-shot, Browningdesigned, Winchester 1885 High Wall, black powder cartridge rifle (BPCR).

The 1885 was a superior design and rated as one of the strongest actions of its type. This is reinforced today by the fact that the modern Browning Arms company produced both, High and Low Wall variants up until the 1980s with a rifle based on it called the Model 78.

So, we come to Uberti’s Courtney Stalking Rifle, chambered in .303 British. It’s styled, to a degree, on single-shot designs of the 19th century, like the Farquharson, that might have been used by sportsmen and hunters around the empire.

The name of the rifle is doubtless homage to that explorer, professional hunter, conservationist, and soldier; Frederick Courtney Selous (DSO), whose exploits in Southeast Africa are legendary. Also, I suppose Courtney Hunter sounds a lot better than Frederick Hunter? I had mine on backorder from Uberti importer, Henry Krank, pre-COVID, the first lockdown, so was very excited when it arrived recently. As the name suggests, this could make an interesting, alternative deer rifle.

Pleasingly, the Courtney displays the quality, build and finish I have come to expect from Uberti firearms. The furniture is Grade-A walnut with their signature, red/brown finish. The Prince of Wales butt, with its distinctive round pistol grip shows some girth, as does the butt and at the back is a periodstyle, red, rubber recoil pad. Up front, a slim and short, splinter-type forend with a black wood tip (I think it’s meant to be ebony). Grip is enhanced fore and aft by some very nice chequering, again in keeping with the timeline.

The high-walled action and operating lever are nicely colour casehardened, with the barrel and iron sights contrasting in a deep and rich blued finish. To put it bluntly - it’s a thing of beauty! Uberti is to be congratulated on the iron sights as they also incorporate a scope base, that does not look out of place either.

At the rear is a tall, 1/4-rib with Weaver-type slotted base for scope mounting. In front is a wide/flat U-notch plate that’s adjustable for windage and elevation. Optional is a plain rib with iron sights only. Up front is a ramped, brass-tipped blade in a removable, steel tunnel. The comb is perhaps a tad high but the gun mounts handily enough and the sights align easily. The wood-to-metal fit is excellent and as always, Uberti uses slim, traditional, slot-head screws to hold everything together; more of that later.

The 1885 falling block action compares favourably to other rifles of the period and for that matter, modern singleshots like Ruger’s No 1. The vertical, sliding breech block and receiver are very strong and the mechanism shows a low, in-line, semi-cocking hammer. To operate, flip the under-lever down and as the block falls the hammer is set at half-cock. With the chamber exposed, slide in the cartridge and seat it against the single extractor lever in the left side of the breech face. Keep a bit of pressure on the case and you will see the block rise fractionally to hold the round. Return the lever to close the action and you will see the hammer still at half-cock, which gives a safe carry. To fire, just thumb it back all the way and squeeze the broad, curved trigger blade. Technically, the 1885 action is extract-only, as you open the lever the case is partially pulled from the chamber, where it can be manually removed, or even shaken free.

Conversely, hit the lever harder/faster and the empty pings out to fully eject, which is far more practical! The trigger broke crisply at around 3 lbs and was easy to read. Like any single or double rifle, a fast reload needs some consideration. You could try holding a spare round between the fingers of your supporting hand, or have a wrist brace with a couple of cartridge loops on it.

Uberti have always kept it traditional, with action and other screws being fine slot head types, which can be a problem that cannot always be successfully addressed with modern drivers. I’d recommend a set of the more traditional, gunsmith turn-screws, which Kranks also supply. For example; after a firing session, I noticed the main tang screw had got a bit loose and I used one from that set, which did the job and more importantly did not damage them. Likewise, those for windage and elevation adjusters.

Overall, the Courtney is an attractive, well made and presented rifle and totally in keeping with Uberti’s classic, reproduction ethos. It’s handy too, weighing an easy 7.1 lbs with a 24” barrel and a length of just 37.5”. QD sling studs are fitted that accept the standard Uncle Mike-type swivels and the front one is mounted on a barrel band, in keeping with the style. Although this rifle is more about iron sights, I wanted to fit a scope to see what it could actually do but at the same time wanted something a bit period looking.

The solution came in the form of an old Pecar of Berlin, Champion, 8x52 on a 26mm body tube. Nice and simple, it’s over 40-years old and seemed to suit the Courtney concept perfectly. Higher rings are the order of the day, as if the scope is mounted too low, you will have issues manipulating the hammer, as you can see the Champion is about right.

The history of .303 ammunition is a massive subject and not one for this article. Suffice to say, the PPU 174-grain ball supplied, is probably similar to the military service Mk VII cartridge. It was going out at around 2400 FPS and shot 1.5-2” at 100m, which I thought was not too bad and good fodder for classic competition. However, my interest is in hunting, so reloading was the route, saying that, PPU produce both 150 and 180-grain soft point loads.

Due to the strong action, you can load to full value, .303 commercial data. Kranks supplied all the makings; PPU cases, Sierra 150 and 180-grain Pro Hunter bullets and Ramshot Wild Boar (WB) powder. I assembled this on my Lee Classic Cast press using their RGB die set. A bit of experimentation showed that the 180-grain load was a bit slow and lumpy in the shoulder, so I stuck with the 150s. I picked two charge weights, with the entrylevel being 41.4-grains of WB, lit by a Federal large rifle primer, with a cartridge overall length (COL) of 3.005”. The maximum charge was 46-grains of WB at the same COL.

The entry-level load produced good results, with an average speed of 2652 FPS and 2350 ft/lbs of energy, plus it printed some nice 1-1.5” groups at 100m. Extreme velocity spread (ES) was a stunning 10 FPS, doubtless an excellent and reasonably comfortable hunting load. Moving up to the 46-grain top-end showed plus and minus points. Felt recoil increased significantly, as did performance: 2861 FPS | 2726 ft/ lbs and an ES of just 8 FPS. Groups went to 2”, but in both cases, I put some of that down to the Pecar’s rather thick reticle! I’d say 1” and 1.5” accordingly would be realistic.

I’d stick with the 41.4-grains, as I found that felt recoil became a lot more noticeable through the butt. A butt bag or similar would take some of the sting out of the hotter loads. With iron sights, you expect bigger groups, but to its credit, the Courtney could still break 4” clay pigeons at 100m, so good enough.

Single-shot hunting rifles are not for everyone, but I like them, as they sharpen your skills, given you only have one round and a slower reload. The Courtney proved itself more than capable and I really enjoyed using it, plus I hope to take it hunting before I send it back. However, I did feel the forend was a tad short, but it worked. Price-wise, it’s around £1350 and of equal ability, compared to the European, Kiplauf-types, like Blaser’s K95, which show an entrylevel price of around £3.5K.

Uberti also offers the Courtney in .45-70, which could be a tad lively! I think, however, they have missed a trick here, as in many ways they’ve produced a viable, single-shot hunter and not just a classic recreation, that could benefit from more calibre choice. I’d like to see it in 7x57mm R (rimmed) or 6.5x57 R, and I’d imagine it could also be made for rimless numbers like .243/.308 Win etc.

Not your run-of-the-mill hunting rifle but nonetheless up for the job, and one that exudes an oldworld charm and looks like it’s made to higher modern standards. It’s definitely more than capable of putting the meat on the table!