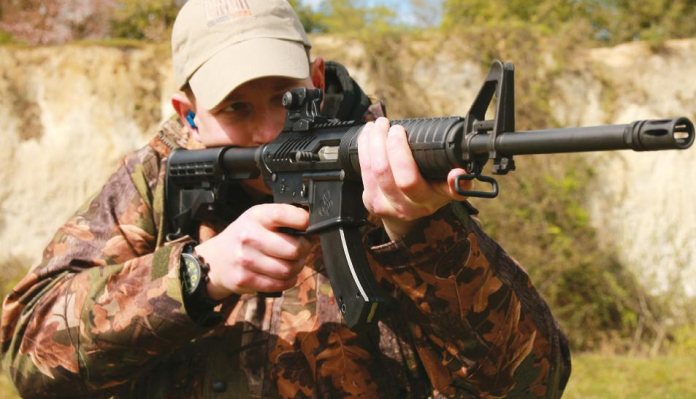 Though 22 rimfire AR15s are nothing new anymore there was a time when they were the up and coming thing! One of the early models that showed some serious promise and potential was the Victory Arms V22; actually an upper (barrel & action only) made to drop onto a standard 223 AR15 lower. Unusually it was made by CZ and used a purpose built, 10-shot magazine and was aimed at the existing AR15 shooters in the USA as a cheap and fun addition to their 223 semis. It might have passed into obscurity but Bob Clark ,Southern Gun Co (SGC) liked what he saw and started offering them to go with his Speedmaster, straight-pull ARs. Before this he had been using the Ceiner, drop-in conversion kits and mating them to a dedicated 22 LR barrel to offer his own rimfire semi-auto guns – the Match Masters.

The original build was quite basic and offered a round, free-float forend with a flat-top Picatinny receiver and forward block should you wish to fit iron sights. Unlike the real AR there was no T-handle at the rear of the receiver, instead a small cocking handle reciprocated with the bolt on the right of the action. It was certainly an alternative to the ubiquitous Ruger 10/22 but lost out a bit on capacity and firepower as the US industry offers a number of Rugercompatible 25-round mags to suit.

Now the .22 semi-auto AR15 is firmly established with a number of makes readily available and to my knowledge the original Czech-made V22 upper is no more, equally so Victory Arms. However it lives on with SGC as Bob now makes the whole thing in-house including the bolt mechanism and magazines to which he has designed and added a billet-type 25-rounder. The receiver is a bit sleeker over the original with an angled back and cosmetic cuts on the sides. You have the option of either a free-float type without iron sights or the more military M4/CAR15-style with flat top receiver for a D-handle or optic with a barrel-mounted A-frame up front along with the current A2 flash hider/muzzle brake. As with any AR the world is your oyster and you can elect for specific furniture and control options. True most favour the shorty M4-types but if for example you wanted a full-length, 20” A2 rifle it would doubtless be possible!

The rifle arrived wearing a Rock River-style telescopic butt, standard A2 (finger hook) pistol grip and the round plastic carbine forend. To complete the look there was a cage flash hider and A-frame front sight with the non-carry handle A2 rear unit, which offers twin, flip apertures and full windage and elevation correction. The majority of this is pleasing cosmetics, as the basic V22 action remains. What is however different is the magazine, as SGC for a few years have been making their own 25-shot design. Machined from solid stock it offers a single column feed and is dimensioned to fit the standard AR mag well. The lower receiver is a standard AR15/223 build with the usual controls; mag button rear/right of the magazine well, slide release/hold-open on the left and the safety left above the pistol grip. However, the spindle is cut and threaded on the other side to fit a secondary, right hand lever should you want to go the ambidextrous route.

My one concern with any semi-auto 22 is reliability and for that read ammunition compatibility and fouling build up that causes jams; as many semis start off doing well then gradually go down hill due to the lack of cleaning, which causes stoppages. To this end when testing I always run a good selection of ammo through the gun and note what type it prefers and when/what stuff-ups occur. But first the rifle…

From the box the gun comes with a standard weight trigger; nothing amazing but this example was easy to get on with and broke at a crisp 4 lbs – better than the military average! Though configured to look like an AR15 upper, the V22 is simpler, as the action cocks on the right side, as opposed to a rear-mounted T-handle of the 223 version. In use this proved easier and far more practical!

One aspect of the design I do not care for is the automatic (magazine-actuated) bolt hold-open catch is non-functioning. It’s there and can be set manually to lock the action open, nor does it give a partial hold-open on the mag platform as the Black Dog mags do. I find it odd that even though the V22 was expressly produced for AR15s, the designers never incorporated what I consider a very important and practical function of the black rifle.

The 16” barrel offers a medium/heavy profile and shows the standard A2 flash hider on the end. Removing it exposed a ½ x 28” UNAEF thread, which means most 22 moddies will not fit as they are ½ X 20” UNF. This is not a problem as if you ask SGC will cut this form instead, conversely more companies are now offering 22 cans in the ½ x 28 option. The SGC magazine shows a pronounced curve and is heavy, but well made and reliable, plus it’s tough and easy to strip and clean. Its 25-round capacity also makes it competitive with the likes of the Black Dog and S&W mags too. It is however, butt ugly and will not find favour with those wanting the 100% pure AR15 look; you might be surprised how big a role cosmetics play in equipment selection!

My usual testing method with 22 rimfires is a cross section of makes and types; typically I start with sub-sonics move up to Match and standard velocity then finish off with hi-velocity. However the V22 had other ideas and I experienced problems with all brands tested. I spoke to Bob on this matter and he told me that the rifle is specifically set up for CCi Mini Mag, which is a high velocity loading. Typical as this is one brand of ammo that I have difficulties getting, so my thanks to Neal at Suffolk Rifle Co who supplied some.

The V22 bolt is a solid and heavy design certainly in comparison to other 22 AR systems, and runs on twin springs and guide rods;. So it’s no wonder it needs the extra oomph of the Mini Mags! This was plainly evident when using Fiocchi standard velocity 40-grain round nose lead, which easily runs GSG’s 1911 LBP, MP40, StG44 and my Smith & Wesson M&P 15-22 with consummate ease! With the CCi the rifle ran well with only one type of stoppage occurring, as occasionally the fired case would not eject but somehow get thrown up into the path of the bolt and jammed behind one of the rods. Something it did with the other brands tested too but more so. I can only conclude that a drop in bolt operating speed which can happen with 22 LR cartridges with even a slight velocity loss in a semi auto caused this. I’d be tempted to fiddle with the bolt springs to try and make the gun a bit more ammo-friendly!

Unsurprisingly accuracy and performance were not in doubt, as Bob builds a good rifle be it 22 LR or centrefire. Scoped-up and off the bench the V22 was shooting an easy ½” @ 50-yards and just shading 1” at 100. I like iron sights, which is a personal thing but for most I’d recommend the freefloat option be it a ventilated 4-way or a standard round tube with glass on top. A complete V22 is not cheap as can be seen and I perhaps see it more for the straight-pull owner who wants the fun and economy of a 22 rimfire AR, drop-on upper, which should bring the cost down!