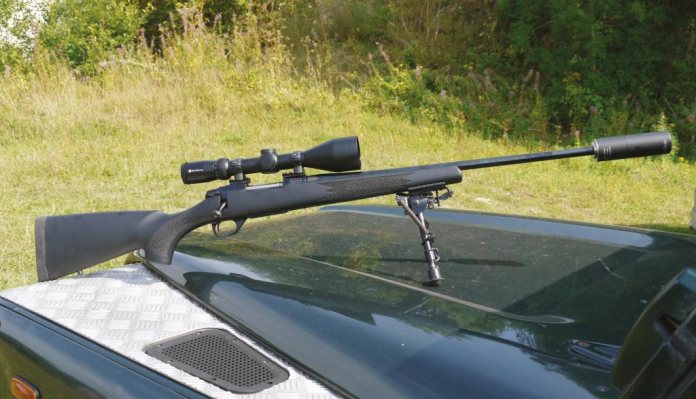 Highland Outdoors are perhaps best known for being the importers and distributors of Howa of Japan, which is a fine brand, who also make complete rifles and supply components for other companies - Weatherby’s Vanguard and Nosler’s M48 series. This has now spread even further, with the resurrection by Highland of the old Webley & Scott name that now not only includes airguns but also shotguns and rimfire and centrefire rifles too. The last is of particular interest, as last year they launched their Empire bolt-action sporter.

The Empire is doubtless made by Howa but that is no bad thing! Like their 1500, the rifle is a blend of Remy Mod 700 and Winchester Mod 70 and the first example I tested came in classic, walnut, sporter-style furniture that showed reasonable timber and a good general build. It offers a decent length of pull (LOP) along with a deep rubber recoil pad. The butt shows a straight comb, vestigial cheek piece with a well angled and handfilling pistol grip. Chequering is machine-cut and quite shallow but offers a decent grip, QD sling studs are fitted and the forend tip and grip cap are attractive in contrasting rosewood.

Action-wise, there’s no mistaking that trigger mech, with its 3-position safety on the rear/right - FIRE, SAFE (bolt operation) SAFE (bolt locked); equally, the large and angled recoil lug! The faceted receiver sides and bolt shroud give a pleasing look and the bolt body is engine-turned. The metal work is well blued and nicely struck off before the process is applied. Feed is from a steel, 5-round, detachable box magazine, with the release catch at the front. The bottom metal, by contrast, is blacked aluminium and the trigger guard is well shaped and large enough for a gloved finger.

So that’s the Empire as was, but since my first test, Highland has added two new stock options. On test is the VFT Black Soft Touch and yet to be seen, the Tactical, with adjustable comb, which is a style that is becoming more popular on sporters these days. In essence nothing has changed, with the hammer-forged barrel, threaded 1/2x20 UNF with protector, 3-position safety, adjustable trigger and pillar-bedding.

My tester came in 234 Win with a 22” tube, which is probably the sensible, entry level length for this cartridge, as it can be velocity-sensitive with anything much shorter! In real time that might mean the rifle not making 1700 ft/lbs, so not large deer legal.

Twist rate was 1-10”. Along with the rifle, Highland added an aimsport, muzzle-mounted moderator and a Nikko Stirling 3-12x56 scope in NS QD rings and bases. I added a Harris BRS bipod and Winchester’s Varmint-X 58-grain and Extreme Point 95-grain loads.

First impressions are of a well made and finished rifle, the blueing is of good quality and the bolt body, which is left in the white, is engine-turned, as with the Classic version. The VFT stock is dimensionally identical to the walnut, though its soft touch finish does give a pleasing grippy feel and hold. However, Webley have also chosen to include textured panels on the sides of the pistol grip and forend for added grip, which is always welcome.

For me, in 243, something around the 90-100-grain mark is good deer medicine, leaving the lighter stuff for foxing etc. The Winchester Extreme Point 95’s were running at an average of 2995 fps, with an extreme velocity spread (ES) of 42 fps. This produced a healthy 1902 ft/lbs of muzzle energy so well over the 1700 ft/lb level. Off the bench, this load was shooting just sub 1” again- more than acceptable.

The 58-grain Varmint-X was averaging 3479 fps and 1572 ft/lbs with an ES of 17 fps. It did not shoot as well as the 95s, which I put down to the tighter 1-10” twist and it probably would have preferred a slower rate of 1-12”. The Empire generally ran well but I did have some magazinerelated problems as it latches front and rear and it’s easy enough to only click it in one position, which causes feed issues. I soon learned to push it up vertically and give is a slap to locate it correctly. I will say the original rifle never had this issue! Overall impressions are of a well made and shootable rifle that is perhaps a bit expensive for what it is, given the amount of similar guns around this price point.