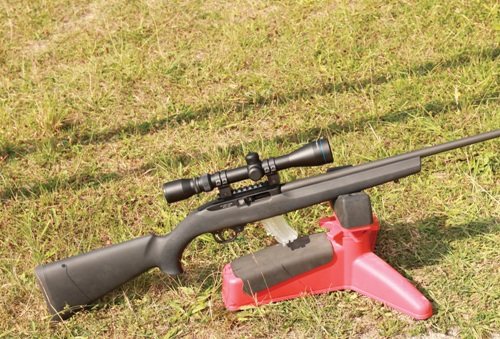 Looks familiar well you’d have to be living in a cave for the last 30-years not to recognise the outline of what must be the most successful 22 semi-auto rifle ever made - the Ruger 10/22. You would but it’s not, as what we have here is the Webley & Scott X22 an unabashed copy of this iconic rifle. So why isn’t Ruger taking W&S to court for patent infringements? Well the patent has run out according to the impoters! But playing it safe they have not copied the familiar 10-shot rotary magazine, instead they have substituted it with the Butler Creek 10-shot stick.

Webley & Scott is part of the Highland Outdoors portfolio and also includes a range of double barrel shotguns all made in Turkey and a centrefire bolt-action called the Empire. All of these for later consumption but let’s get back to the X22. It’s made by Armscor in the Philippine Islands who have a rep for making a lot of 22 rimfire rifles of all types.

From the box it comes with a Hogue, rubber, over-moulded stock, a familiar item with textured panels on the wide forend and palm swell pistol grip. The length of pull (LOP) is good at 13.75” and QD sling studs are fitted. As I said you would be forgiven if you thought this was yet another version of the 10/22, the real tell tales are the lack of iron sights and the blocky Picatinny/Weaver scope base. This does not show the double 1⁄2” to 1” dovetail of the original. Saying that the website shows the option of hi-vis iron sights and a wooden stock if you prefer.

The slim, tapered barrel is 18.5” long and threaded at the muzzle 1⁄2 x 20 UNF, Highland supplied a Hogun Decimator Rimfire moderator, a bit large by today’s standards but it certainly works and won’t break the bank! Taking the rifle apart shows the ‘dead copy’ principle goes beneath the skin as inside it’s identical too. The cross bolt safety sits at the front of the trigger guard and pushes right to left to FIRE and reverses for SAFE. The trigger blade is wide and curved with the spring/ plunger return set inside the bow of the rear guard.

Moving forward we find the manual hold open lever, which is one of the things I like least about the 10/22 as it can be a bit fiddly to operate. Like the original the X22 offers no automatic last round hold open, pity as it would have been good to address that issue! The mag well is identical with its flush-fit release plate at the rear. Highland’s website also shows the rifle comes with two weights of recoil spring – light for sub-sonics and heavier for hi-velocity. Clever idea just remember which one is in at the time!

Overall a blatant copy of the 10/22 but one that feels good enough. Like I said unless you picked up on the receiver markings with their W&S logo and different positioning of the gun number you would think the X22 was yet another model from Ruger. Out of interest I tired the barrel action in a couple of after-market stocks and they fitted together easily.

The longer, single-column Butler Creek magazine does make changes easier as there’s a lot more to get hold of and you don’t have to hook your finger around the front as you have to with the flush-fit Ruger original. What was strange was the fact that the Ruger BX-25 25-round mag goes in but blocks the bolt, whereas the original 10-round 10/22 rotary design fits; go figure!

For the test Highland Outdoors supplied an AGS 3-9x40 Mil-Dot scope, I had real problems fitting it as I do not have a lot of 1” to Weaver bases. It sits a tad high on the rail but head/scope position is not an issue. I dug through my ammo bins and used Fiocchi, Remington and RWS sub-sonic and Remington Golden high velocity hollow point.

Function was my first priority and the X22 showed some teething problems you might equally expect from a 10/22, though it did not like the RWS Subs at all! Most of this seemed to be traced to the magazine, which after about 150-rounds started to smooth up. Out of interest I tried the 10-shot Ruger rotary mag, it fitted in the well but proved unreliable, so I used the Butler Creek for the rest of the testing. The return spring that was fitted handled both sub-sonic and HV with equal ease!

The trigger was good enough but the safety very stiff. The scope is more of an airgun optic as it was pre-parallaxed at 36-yards, with focus at 100 being a bit spotty, but workable. Its Mil-Dot reticule was useful as I zeroed at 50 and trial and error showed a 3.5 Mil hold over got the rounds landing on the spot at 100. On that point average groups at 50-yards were around the inch. The pricing structure is interesting as you get the X22 for £334.49, a wood- stocked 10/22 ball park is £375, however you also get £90s of Hogue rubber over-moulded stock thrown in for free with the Webley!

FOR: A cost effective semi-auto rimfire package
AGAINST: Not a lot
VERDICT: Does not like 10/22 mags Very much a 10/22 but with a better stock