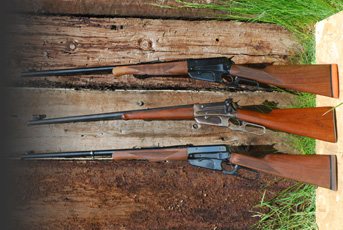 The Winchester 1895 was the last lever-action rifle that John Moses Browning designed. Different from his previous creations it used a top-loading, fixed box magazine as opposed to the more familiar under barrel, gate-loading system. It was also specifically built for the new and emergent smokeless ammunition and pointed (spitzer bullets), which could not be used in a tube magazine design as the ammo sits nose to primer. Calibres included the 30-40 Krag, 303 British, 7.62x54mm R (Russian), 35 WCF (Winchester Centre Fire), 30-06 Springfield and others and perhaps the most famous, the 405 Winchester.

It was also sold as a military carbine and rifle and used by the Royal Canadian Mounted Police, Arizona Rangers, US Rough Riders and the Russian Tsarist army. Plus, in 405 Winchester, by Teddy Roosevelt the 26th US President and his son Kermit amongst other guns in their 1909 grand African safari. Between them they killed 512 beasts including 17 lion, 11 elephant and 20 rhinoceros. Teddy always referred to the 1895 in 405 Win as his “big medicine” and I can now see why…

Winchester has never fully discontinued some of its more iconic rifles and even though not in full production unlike their Model 70 bolt-action, they do appear in limited editions occasionally. They have re-issued the 1892, 1886 and 1895 all of which are made in Japan by Miroku and they produce an exceptional product… Browning also offered their own copy in 1984, which is said to be the best of the bunch. It’s plain to see that some of the inspiration from their modern BLR (Browning Leveraction Rifle) came from the 1895 too.

I’m a big fan of lever-actions and have owned one of the Miroku Winchester 1886s in 45-70 Government, which was a beauty. So the chance to get an 1895 from the latest, modern-made batch was irresistible. Especially as I had turned one down about 10-years ago and always regretted it. The guns come in three models - Grade I (standard walnut and blue), Safari Centennial Custom (blue with gold decoration, Roosevelt medallion on the butt and better walnut) and Safari Centennial High Grade (same as the Custom but with silver nitride receiver) and three calibres – 30-40 Krag, 30-06 Springfield and 405 Winchester.

I opted for the Grade 1 as I planned to hunt with it and fancy finishes would be wasted. The 405 was appealing but it’s a bit too much for more general use, so I went for 30-06 which is more practical. Fortunately Andy Norris (Browning Sports UK) who jacked up the 1895 for me has one in 405, so I had access to both calibres. He also had an original in 35 WCF, so I could contrast and compare and also try another classic calibre.

I think the 1895 is probably the most elegant lever-action made, however, others think it’s ugly with the box magazine rather spoiling the lines. The modern guns all show the second version, scalloped receiver, which is stronger than the original flat-sided action. Sights consist of a tall, brass-tipped, windage-adjustable blade up front and a semi-buckhorn elevator wedge at the rear. In the day Lyman offered their Model 21 Receiver Sight that puts a windage/elevation adjustable aperture at the rear of the action. Quite by chance the 35WCF gun had one fitted. By all accounts it improved accuracy and was a popular modification. Today you can buy reproductions of these and similar.

The layout consists of an open-topped receiver, which locks at the rear by a rising lug. The operating lever is complex with a three part build - the main lever, with hinged locking bar, which is pushed down by the base of the hand as you cycle the action and the short cantilever trigger plate. The hammer is of the rebound type and will only contact the firing pin with the trigger pressed. The major mechanical difference is the addition of a tang safety, though far from original it’s a welcome feature.

The barrel shows a medium tapered profile and is 24” long; all the metal work is deeply blued. The Grade 1 walnut is basic but of good quality with a straight-hand butt and tapered Schnable forend. At the rear is a standard steel butt plate, no sling swivels are fitted. Tipping the scale at 8lbs the 1895 is 42” long. Comparing old to new shows minor changes – the Schnable of the original is not so pronounced and there’s no chequering either.

The capacity is 4 +1 and it loads through the top of the action and ejects near straight up and back. This precludes the fitting of a scope over the receiver, nor would you want to in my opinion. However, this throws up the fact that iron sights on what is essentially a hunting rifle limit you to a practical range of about 100-yards. Like the original the new guns are drilled and tapped for the Lyman 21 sight. Apart from the pleasure of owning a modern classic the 1895 would also make a great driven boar rifle as ranges are normally short and it’s slick, smooth and reliable action combined with a hard hitting calibre like 30-06 or 405 Win would be ideal.

The opportunity to test the rifle in three classic calibres was excellent. The 30-06 is perhaps the most practical and shot well with a selection of loads (150 to 220-grains), but seemed at its best with Remington’s 220-grain round nose soft point. This was pushing an average of 2357fps/2713 ft/lbs. At the other end of the scale a 150-grain is doing around 2800 fps/2600 ft/lbs. Recoil was reasonable, but that steel butt plate did not do a lot for comfort. The first of my two minor modifications was replacing it with a Pachymr Decelerator pad, the second the addition of sling swivels. The front one being barrel-mounted to keep it in spirit.

The 405 was a little more noticeable in the shoulder, but not too bad. I used Hornady’s new 300-grain JSP Interlock load, which was giving 2140 fps/3050 ft/lbs. Andy supplied some old Kynoch, 300-grain SP ammo, which produced 2263 fps/3410 ft/lbs, which is a considerable increase in energy for an extra 123 fps. With reloading I see no reason why these figures could not be duplicated today. However, at these levels things were starting to get a little lively and though appreciating the power offered by the 405; I’m glad I went for the 30-06!

All three rifles showed smooth and slick actions with no problems on primary extraction, though the throw of the operating levers is a bit on the long side. Loading is easy, but with a rimmed case you must ensure they are stacked one in front of the other as they go in. No such problems with the rimless 30-06, but here I found it easier if the bases were entered at a sharp angle. The other beauty of this action is the ease of keeping it topped up as you go…

To be honest the basic blade and notch sights are good out to 100-yards ish. At this distance you can expect to be inside 3-4”, at 50 with care you can get it down to an inch. The Lyman 21 does improve things a bit, however in bad light the aperture starts to look dull. You could butcher the rifle and screw on a scope base and I have no doubt it would be able to shoot 1” groups at 100-yards. But this is not what the 1895 is about.

I bought mine more on a whim, but fully intend to take it hunting and feel confident that I will be able to drop deer up to 100-yards. OK I might need to stalk in a bit more, or simple wait until they get close enough. For wild boar I have no doubts about its ability, here the iron sights are not an issue and combined with its 5-shot capacity, ease of loading and fast handling will make it perfect for driven piggies…

Browning’s BLR though in many ways a modern design with its detachable box magazine and rotating bolt shows some similarities to the 1895 – rebound hammer, trigger pinned to the operating lever, iron sights and the same general feel and layout. This is another lever gun I rate and I have tested the new take-Down version, which is on our website – www.gunmart.net so check it out.

My thanks to Andy Norris for the use of the 405 and 35 WCF guns and Jason Hornady (Hornady) for the 405 Winchester ammo.