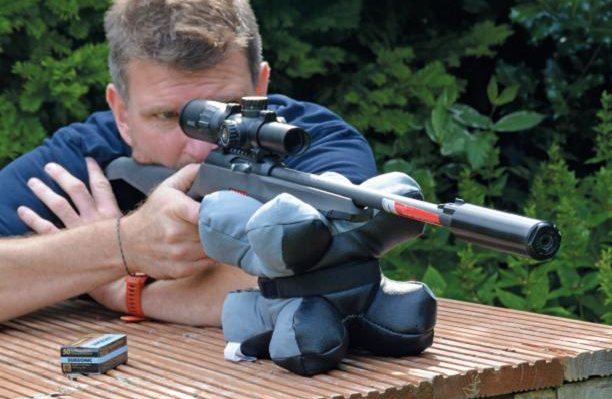 It’s so easy to look at low-cost rifles with a disdainful opinion and consider them weak and inaccurate without a second thought. Additionally, there is looking down upon the country of manufacture as being somewhat second rate, but I totally disagree because this Wildcat rifle from Winchester has addressed one of the fundamental flaws associated with every other semiautomatic rimfire, and that is cleaning ease.

Everyone wants to know ‘what’s the most accurate rifle’ or ‘how far you can shoot’ but when it comes to day-to-day reality with rimfires, it’s the inherently dirty nature of the ammunition, compounded by high volumes shot in fast fire action with powder burn residue and bullet lubricants gumming up all mechanical components. The Wildcat is made in Turkey and has taken this on board. The entire firing mechanism has been designed to be easy to strip from the rifle for effortless cleaning, without tools.

The 16” barrel is finished with a ½” muzzle thread for a moderator. It’s one of the few steel components on a rifle that uses polymers extensively, but with thorough intelligence and attention paid to mechanical requirements, balanced to price. Investing in extensive injection moulding tooling is incredibly expensive and shows massive commitment from Winchester.

The polymer stock is lightweight yet remains stiff enough to fully free float the barrel. It shows fun details like Picatinny slots and a moulded in sling stud for accessories. The plentiful grip is assured with finger grooves in the stippled overall deep grey finish.

Reaching the receiver area is where the most fun starts. The magazine is a 10-round rotary unit made from red, black and clear polymers. It’s interchangeable with any Ruger 10-22 magazine but the Winchester unit itself rises above them. It has a rear serrated rotor that allows easing of spring tension to speed up loading (where physical thumb pressure alone often sheds excess bullet lubricant), plus there is a small metal pawl on the left rear that works to lock the bolt open when the last round has been shot. You won’t find these features on a Ruger mag. Being clear also allows visual inspection of the remaining rounds.

There is a frontal release catch as well as a red grippy one on both sides of the rifle, allowing the mag to drop feely into your waiting palm. The bolt can be disengaged with either the charging handle cycling the action or by using a sliding plunger button, located on the left side. The red controls might look a little garish to some but soften the tone of the rifle and for those new to using such items, make a clear statement of accessibility.

The fun really starts when you look to the rear of the receiver, at the back of the Picatinny rail. A red button is recessed and with a firm press as well as the mag removed, the trigger guard can be pulled down and the action internals draw free from the receiver. You can now inspect, clean and dismantle the blowback bolt as well as clean debris from the action face, plus remove dust or firing residue from the spring. This internal mechanism has a claw at its front and in fairness, is as easy to remove and return as the magazine on some awkward rifles, which is fantastic! Overall, an inspiring step by Winchester and in fairness has so far been the innovation highlight of the year.

Another great piece of design is the charging handle for the bolt, which sticks out of the right-side ejection port. It rotates, meaning you don’t need to remove it, it remains captive within the bolt and simply springs vertical to re-enter the receiver after cleaning, then rotates clockwise to return to its perpendicular position for regular action operation.

When plastic is fantastic

None of the internal mechanism is machined or cast aluminium, nor is it fabricated steel, it’s all polymer. The receiver, the Picatinny rail, the trigger guard, yes, all plastic. Only the bolt and springs within, the ejector mechanism, trigger sears and extractor claws are metallic and dismissive as you may be, the gun works really well.

Trigger pulls are single-stage, breaking at 2300-grams and creep isn’t bad at all. It’s consistent in use so you get a feel for it. A cross-bolt safety sits above and to the rear and this can be swapped for your preference on which side is ‘safe’.

There’s a red plunger in front of the trigger guard to lock the bolt open if required, but it’s not something I found necessary considering the inherent function of the Winchester’s mag. It’s perhaps a control you are more likely to use in conjunction with high capacity Ruger mags that don’t offer the auto-holdopen function.

The butt shows a futuristic design and weight reduction has been achieved by leaving an empty space between the upper and lower struts that extend to the butt plate. The length of pull (LOP) is 13 5/8” and with an overall weight of just 4.3lbs, the gun is light, fast and delicate. It’s also warm to the hands and offers no edges likely to snag hands, fingers or clothing.

Open sights are supplied. The aperture at the back is fast adjustable on the rearmost sloping dovetail, behind the Picatinny rail. There’s a fixed blade at the muzzle, behind the capped thread. I find these types of sights easier to use than a blade and notch, if a little less precise, perhaps.

Plinking is not a dirty word

I had a quick plink with the fixed sights to check functionality straight from the box. I was immediately pleased to find no-hassle loading the mags or with any action control operation. I then fitted a 1-6x24 Hawke scope in low rings, which suited the streamlined stock layout.

If you are brutal with the rifle then you can feel the stock flex a little, but in reality, this is a deliberate effort with neither primary zero nor intermittent problems found on the mean point of impact. At 50m with a 6x scope, I was able to differentiate between good and bad ammo, flyers were not the rifle’s fault! SK match provided the tightest groups on paper and RWS Subsonic was almost as good, plus is a suitable hunting round.

RWS seems to be one of the slowest rounds on average and I like testing it in semi-autos because it pushes the limits of how little recoil energy is needed to cycle the action. This combines with cleanliness, and I’m pleased to say with just a 942 FPS average speed, it was still 100% functional. The SK managed 1000 FPS and produced 30mm,10-round groups, while the 42-grain Winchester hollow-point was a bit disappointing, with more like 80mm groups. The 40-grain Hornady ammo showed significant flyers but not any fault in the ammo, just not a great pairing to the rifle’s barrel.

Overall, the rifle reliably printed 30 to 40mm, 10-shot groups with match or hunting ammo, and with a 6x mag scope at 50m, this seemed acceptable. Out of 400 rounds used, I had 4 stoppages, all of which were partial ejections using a specific ammo type which I didn’t continue with.

Moving away from the bench for more fast fire plinking fun, I really enjoyed using the rifle. The last round hold-open sped matters up, as I didn’t have to wait after a ‘dead man’s click’ on an empty chamber having lost count of the number of rounds shot.

I found the rotor on the rear of the magazine made filling them significantly faster and mag changeovers were smooth, if needing a slightly firmer pressure (than a Ruger) to lock them in because of the additional hold open spring functionality.

The action still felt fast, with snappy bolt reciprocation, regardless of the sound dampening effect of the material, which is a complex polymer using secondary filler materials and likely short fibres in their reinforcing matrix for longevity. It’s never going to be a precision shooting machine that lasts forever but it is a rare thing - a gun that does exactly what it promises to, and one I have really enjoyed the purity of. All this allied to comprehensive design theories and materials combining some old-world semi-auto charm with up-todate technology at an attractive price.

As a lover of shooting, design and engineering, this is a very pleasing new rifle and although considered a plinker, it’s no slouch when it comes to reliable performance on target. Functionally excellent, ammunition tolerant and easy to clean. A big thumbs up for me and one of the highlights of 2021 so far!