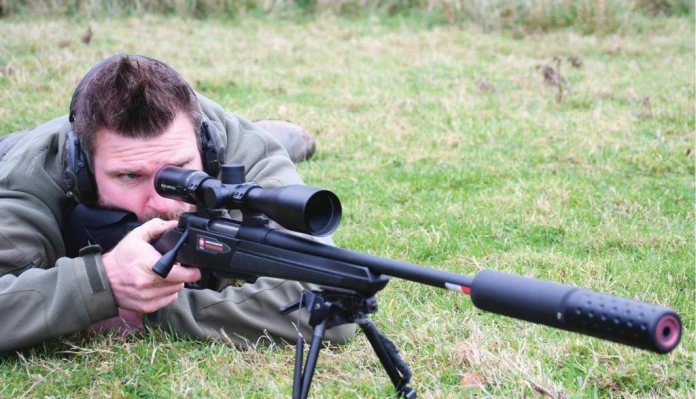 Winchester’s XPR rifle impressed me when first encountered and each one since has reminded me of the inherent capability of this rifle’s genetics that seem to deserve more positive attention.

The XPR uses a large diameter, three-lug, push feed bolt with integral raceway to interface the left side bolt removal catch. This minimalistic linear profile enables rapid bolt transit without the interference of individual lugs within their own broached raceways and a design that in fairness, I find superior in these days of rapid computerised machining at all rifle prices. The midweight barrel is threaded 14x1mm upon it’s 19.2mm overall diameter with a thread protector included. This shows a gradual straight taper to the reinforce, finishing the 21” tube for what seems like more of a woodland design rather than long range or varmint specification where long barrels are free speed. All metalwork is finished in a deep matt black lustre for a uniform appearance throughout. It pairs well with the similar stock and all ‘bottom metal’components, as well as the three-round detachable magazine in polymer itself.

The bolt handle demonstrates a 60° lift to cock the action on opening, with plentiful primary extraction of fired brass. Its handle extends 75mm from the bolt shaft with a 22mm teardrop tip for natural operation. On many actions, the alarm bells would start to ring in my head, that this extended bolt handle would initiate bolt shaft stutter or jamming but not on the XPR. The 22mm bolt diameter and clean cylindrical shape run fast and prove almost impossible to jam through its 106mm overall travel. The barrel appears to be fitted with a barrel nut that’s been kept neat in profile, matching the action’s overall circular profile with flattened upper surfaces for scope mounting, with twin screws threaded on each bridge for which Weaver bases are supplied. Although mine had a set of excellent Talley rings fitted when delivered, along with a Kite scope.

A silver cocked action indicator is exposed under the rear of the polymer bolt shroud, with safety catch on the right side, Forward-FIRE and Rear-SAFE. The latter locking the bolt handle closed, with a small secondary catch ahead for safe bolt opening if required. Twin Allen screws tension the action into the stock’s inlet either side of the magazine well and looking into the details, the trigger unit is attached to a separate hanger extending rearward from under the action. A single adjustment screw is visible on the all-metal trigger unit that appears neatly machined, with polished internal sears. The gun is not advertised as having an adjustable trigger and the screw is thread locked, but in fairness, I’d be very happy using this trigger on any rifle as it’s 1500-gram weight and crisp break make it a delight to use. Some might think that sounds heavy, I’d argue that I would rather have a crisp trigger with consistent reliable pulls than a light, breathy ‘detonator’ on a true field condition rifle any day.

Furniture is all polymeric with the Kalix adjustable cheekpiece taking pride of place. This uses a single, easily gripped triangular dial on the right side of the stock to unlock, offering 22mm of upward travel on the slim, comfortable cheekpiece that engages the cheekbone without displacing the jaw. The stock is hollow and gives some reverberation for handling noise but is non-harmonic under recoil with the light cheekpiece diffusing transfer under the cheekbone very well.

It is all quite lightweight but seems ample for use, with a grippy stippled recoil pad at the rear for solid anchoring and recoil transfer into your shoulder. I think if you are going for solid cheek weld with an adjustable stock, it is folly not to offer a grippy recoil pad to stabilise the position in collaboration, well done Winchester. This is fastened with twin screws so spacers can be added if required, although none were supplied with mine. The homogenous texture of the pad means there are no hard spots to concentrate recoil. The overall feeling that it is the right side of becoming ‘spongey’, a route too many US makers think is the answer to making rifles magnum proof. Comfort during recoil is assured with minimal muzzle jump or rifle bounce from your shoulder on a centrally balanced rifle.

The grip is an open ambidextrous radius with stippling moulded in, similar to that of the forend. It’s hard polymer without any kind of rubberised feel so wipes clean of any dirt it attains. The grip is perhaps a bit on the small side for my hands but not uncomfortable. The reach to the trigger is approximately 75-80mm, which I feel appropriate for a sporting rifle with a 13.75” length of pull (LOP).

Action removal shows neat injection moulding continuing throughout the barrel channel and inlet for reassuring performance. Plentiful structural webbing is shown in the deeply recessed free-floating forend, offering approximately 1mm space between itself and the barrel with enough rigidity to maintain that clearance during all but deliberately aggressive handling. There is enough meat to fill your front hand with and a sling stud fitted for a bipod securely anchored below, slight finger grooves are shown.

A steel recoil lug is retained ahead of the front action screw, mating with the receiver’s underside with the radiused frontal and flat rear action screw ‘pillars’. Not metallic, but heavily reinforced polymer showing great moulding accuracy with little fettling or spoilage visible before the spacious trigger box sits to the rear. Flipping over shows a neat removable trigger guard and magazine latching assembly. The former shows a slim 12mm width to shroud the 8.5mm trigger within, plenty of space for gloved fingers.

The three-round mag loads in a single column from the front requiring removal from the rifle. However, in the heat of the moment, the action happily feeds ammo dropped in the ejection port, with the push feed bolt face reliably functional for feed and all extraction, plus ejection performing flawlessly by the plunger ejector.

A 3-12x50 Kite scope in Talley rings was supplied with the rifle to which I added a Wildcat sound moderator and Harris Bipod for range time. I ran through an array of ammunition types from Browning, Winchester, 150-grain Federal with Nosler Ballistic tips (2732 FPS) and Hornady, with the few managing 3-shot groups at 100m of less than 45mm.

The 12x scope was never a target tool, but with large red target spots, it provided a satisfactorily accurate aiming solution for confidence.

168-grain Winchester match ammo fell below 40mm but I still wanted more. Velocities were acceptable, with just 90 FPS on average below published figures given the shorter barrel. I felt the gun handled exceptionally well but wasn’t giving me the on-target performance I felt it deserved, so it went to further ammo trials.

178-grain Hornady ELD-X (2520 FPS) hovered in the 38mm bracket with 165-grain SST Hornady Superformance (2749 FPS) becoming capable of 35mm groups, but still short of the legendary 1 MOA goal often expected from 3-shots (at 100m, MOA equals approximately 30mm). So, I tried a box of my ‘average’ handloads which I can seemingly always rely on. These both use Lapua Brass, CCI Benchrest primers and Vihtavuori powder, quite modest by many standards but consistently reliable and again, showed the same here. The 150-grain ProHunter bullets printed a 16mm group (2710 FPS) and the 168-grain SMK (2680 FPS) a 23mm span from centreto- centre at 100m. I was now happy the rifle was a performer and like all, relies on a good ammo match to show its true colours.

I see so many rifles, and this one shows metalwork and fundamental design concepts in use that strike me as profoundly functional with excellence in bolt operation, far beyond its cost and some competitors at double. Made to a price does not have to mean badly designed, in operation, I would put the XPR action up against anything for practical usage. I’m quite fond of its understated reputation although it wasn’t particularly ammunition tolerant on this occasion. I feel the gun cannot be blamed for this though, the consistency of handloaded ammunition, regardless of whether it is individually tailored to a specific rifle, will always prove superior to that of bulk produced lots and here, rang true again.

I think Winchester has engineered a well-proportioned structure to combine human ergonomic needs in parallel to the mechanical requirements, but I advise consideration of barrel length for your specific needs. Value for money looks exceptional to me!