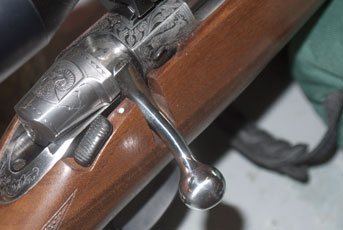 I had heard of Zoli rifles for many years as at one stage Kranks used to bring them in, but I had never shot one. More recently Edgar Brothers took up the agency and it was not for a long time that I got one to test. To be honest here in the UK they are perhaps better known for their shotguns, however, this Italian company can trace its roots back to the 14th Century, but for our needs they really started producing shotguns and combinations in the late 1940s. Bolt-actions rifles came later with their AZ 1900 action.

On test is their Bavarian Alpine, which is a strange name as it’s not an ultra-light mountain rifle as the title suggests, but very much a standard weight, sporter, though built in a classic European style. To me the action looks like a copy of the ubiquitous Remington 700 with its twin lug, lock-up, and plunger-type ejector in the bolt face. Where it slightly differs is in its DSS (Double Safety System) device. It offers a standard, 2-position rolling lever, rear right of the action, which pushes forward for FIRE and pulls back for SAFE. However, there is a smaller catch that allows the action to be opened when the safety is on.

Though all use the same AZ 1900 action there a number of other models with options on stock material walnut, laminate and synthetic, plus blued and stainless steels along with choices on decoration. Plus box magazines on some models, iron sights and set triggers.

The Alpine seems at odds with itself as the stock is a good piece of walnut with a rose wood tip to the semi Schnable forend, equally the grip cap is treated in the same way with a gold finished Zoli escutcheon at the base. The classic, hog’s back butt offers a nice head fit and the furniture is finished off with a slim rubber pad, well cut chequering and QD sling swivels. The general feel and length of pull will satisfy anyone looking for a more traditional build.

The 24” sporting weight barrel is without sights and nicely blued, it’s all looking good so far then we see the receiver! In the white it’s fully engraved with floral motifs and game species; deer, boar and mouflon. It somehow looks odd against what is a very plain and elegant rifle. However each to their own and I’m sure there are many shooters who like that sort of thing… One thing I did note is that there’s no gas escape hole drilled in the side of the action!

The bolt handle is long and sweeps down and angles back slightly. Being a twin-lug engagement the lift angle is a good 90° and the cock-on-opening movement is quite firm to say the least. At the rear of the large bolt shroud is a hole that the tail of the firing pin can be seen through when it’s set, however it does not protrude so cannot be felt. Feed is from a standard, floor plate type magazine with a release catch integral to the front of the trigger guard. There’s a red stag engraved on the base, which looks a little naff, though following the receiver style. I found it hard to fill though it fed reliably. The trigger offers a long, curved, mid-width blade and breaks at a pleasing and beautifully crisp 3lbs.

The Alpine came with a set of Weaver bases and high, 1” split rings, and on what is an elegant rifle they look a bit utilitarian. They do the job no question but do not do a lot for the receiver. To this I fitted a Doktor Optik 8x56 scope with a 26mm body tube, it’s a bastard size these days and I think DO are the only people that still offer it, but the rings coped with it well enough.

The Zoli came with 95-grain Remington AccuTip ammo so it was game on… Without doubt 243 Win is the top UK centrefire hunting calibre, due no doubt to its accuracy potential, good recoil characteristics and wide choice of bullet weights and options. Making this one calibre good for foxes, longer range varminting and small and large deer species. Finding a 243 that does not shoot well with something in this massive range is a rarity and the Zoli Alpine proved no exception. However, it was not at all fond of the AccuTip!

Groups were ragged and inconstant at well over two inches so not conducive to accuracy; that is just the way it is as some guns can react badly to certain types of ammo. Experience has taught me to have a backup plan and this came in the form of some GECO 76 grain Express and boy did the Alpine start to sing! Cracking along at an average of 3206 fps it was shooting lovely ½” groups, though I did finds the extreme spread (ES) a little high at 108 fps! I favour 100 grain bullets for deer, but many users prefer this mid-weight (75 – 85 grain) area as it gives one round that can do it all. The major drawback can be excessive meat damage and where possible neck shooting is the trick!

I do not doubt there is a 95-100 grain load or factory build that will suit the Alpine it’s just a matter of finding or building it, so no problems. I have to say that this rifle leaves me a little cold, it shoots well, is nicely put together and shows quality components and is not visually displeasing apart from the engraved action (matter of taste I suppose) but the price is well over the top for what in essence is a basic bolt-action hunter!