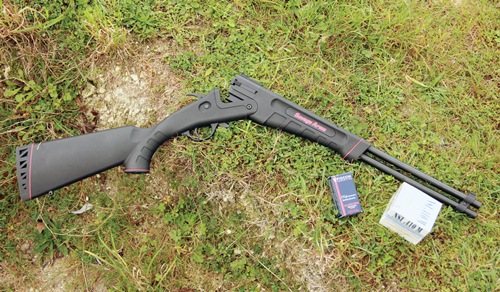 I suppose these days we tend to associate combination (shotgun/rifle) guns with the European market and not with the USA! However there’s a notable exception the Savage Model 24, which was an outgrowth of the original Stevens 22-410, which took the form of a traditional looking break-barrel, over & under (O/U) shotgun layout with the top tube in 22 LR and the lower in .410. This was back in 1938 and as well as its sporting use the US Army Air Force ordered 1500 with synthetic (Tenite) stocks as aircrew survival rifles.

By 1950 Stevens had discontinued the 22-410, but it was picked up by Savage Arms and revamped and packaged as the Model 24 in a surprising number of calibres - .410, 20 and 12-gauge shotgun and 22 LR, 22WMR, 30-30 Win, 357 magnum, 22 Hornet, 222 and 223 Rem and 357 Maximum rifled. The rifle featured 24” barrels and both wood and synthetic stock options along with an external, selectable firing pin hammer and top lever opening system. There was even a deluxe version with a case-hardened action, good walnut furniture and a scope rail along with the standard iron sights. Plus a camo/ synthetic turkey gun (Model 24 F) with three interchangeable choke tubes, a survival gun with an integral compass and on-gun storage along the light and compact 20” Camper’s Companion. As can be seen Savage made the most of the Model 24 and production lasted for 60-years - 1950 to 2010.

From a utilitarian view point a combination gun in the right calibres can be a useful, do-it-all game getter. I think I’d go with a 20-gauge/223 Rem if I was shopping in that area, as I could also include rifled slug to give me a bigger game capacity. I have seen Model 24s before and have to say they are quite nice, but surprising was the information from importers Edgar Brothers Ltd, that Savage have once again re-thought the combo gun concept with their new Model 42.

The gun that turned up was a far cry from the wood and blued Model 24 and if anything was surprisingly small making me think it was aimed at the youth market in the USA. This is an area where many US manufacturers concentrate on as if you catch them at the right age they will be shooters forever. The Americans even have a group that administers this. Called The Youth Shooting Sports Alliance (YSSA) it introduces young people to the pleasures and responsibilities of shooting. They say: “it is our most important task in ensuring that our shooting and hunting traditions remain intact.” You’ll get no arguments from me on that one! The YSSA site provides a directory for youth shooting sports programs across the country. http://www.youthshootingsa.com/

When compared to the impressive choice of calibres and model options of the old M24 the new M42 is far more Spartan in both looks, materials and options. You have two options either 22 LR or 22 WMR rifled barrels but in both cases a .410 tube underneath. Obviously the LR chambering will also accept Short and Long cartridges too. The furniture is a moulded polymer with the choice of black or black! As a flourish Savage have gone mad with the red line detail! Truth is for what is highly traditional design it looks rather good if a trifle hi-tech. It is however tiny, as perhaps befits a youth model, with short 20” barrels and the slimmest stock I have ever seen. However, I’m a hulking 6ft 2” yet it fits surprisingly well and does not feel cramped.

The butt shows a 13.5 length of pull (LOP) with a thick rubber recoil pad. The pistol grip is long and raked with cast-in grooves with texturing inbetween. As befits a US shotgun the comb is very low and places the head nicely for the iron sights – more of them later. The forend is flat like a board and features an angled underside with deep finger grooves. QD sling studs are fitted fore and aft.

Most unusual is the fact the barrels appear to be cast into the forend and the monobloc is high strength aluminium alloy. As you might expect the action is extract-only with the empties being pulled clear by your fingers. The extractor is also manual and consists of a long, polymer, U-shaped plate that fits around the sides of the monoblock, the sides are slotted to allow you to pull it back about 1⁄4” to start the process. In its centre is a sprung steel V-plate configured in size for the cartridge rims.

The barrels are retained and stabilised at the muzzle by an angled Fig-8 clamp that also mounts a thick, fixed blade foresight. The .410 tube is Improved Cylinder bored judging by the patterns it throws, also to allow the use of slug ammo, which in terms of energy will equate to around a 38 +P or 357 Magnum pistol cartridge. Atop the monoblock is the rear sight, this offers a small U-notch and limited elevation and windage adjustment. Primitive but good enough to zero up to 50-yards. However, Savage have made bit of a mistake as the notch is too near the eye and is not crisp or defined; an aperture would have been better. One thing very much missing is any way to mount an optic, given the moulded forend; surely an integral Weaver base would have not been a problem?

Controls consist of an external, manually cocked, rebounding hammer with a hinged firing pin that allows you to select top or bottom barrel by simply moving it up or down. The safety is most practical and consists of a large, cross- bolt plunger located under the hammer on the wrist. It pushed right to left to FIRE (red ring showing) and reverses for SAFE. The safety simply blocks the hammer movement and SAFE or FIRE the trigger operates and it falls. The opening lever is located in front of the trigger guard and pulls back to unlock the action, which will fall open.

Though a basic design the Model 42 was growing on me and I could see that it would make a cute little youth gun given it offers both rifle and shotgun abilities. Also a good little design for the close range hunter or even pest controller for certain uses! Edgars supplied some Fiocchi HV 22 LR ammo along with some rather meaty Nobel Sportitalia 19-gram, #5, 3” .410 shells.

Starting off at 50-yards the 22 tube was shooting about 1-2”, pretty good given the heavy trigger and mediocre sighting system! So a definite rabbit getter given you are happy with body shots, as can be seen a low power scope or even red dot would improve things no end. Much past 50 the limitations of the irons become painfully apparent, I was able to hit a Birchwood Casey, Ground Strike jacks target out to 75-yards but not consistently.

In .410 mode I tested at 20-yards and the 42 threw a dense and surprisingly consistent pattern. That 3” #5 load would be a real bone breaker too! I found you tend to use the irons without thinking and if you do the gun shoots low, so you need to be aware of this and probably aim about 2” higher to compensate. One thing that you must be aware of is what barrel you have selected. In 22 the large/rounded firing pin is clearly seen. In shotgun mode it’s tipped down and the small, grooved selector is in evidence.

The .410 ammo was pretty hot as a couple of times the primer was pierced and extraction proved stiff in this case, recoil though easy was certainly noticeable. Like any manually-operated gun you soon get used to the way to do things. Shoot, open the action and pump back on the ejector plate then pick the case from the chambers.

Given the limited range due to the basic iron sights the 22WMR version’s power and range potential might be a bit wasted. Though just supposition it occurred that a UK version would be good. Thread the rifle barrel for a moddy, add on a Weaver base then fit an extended 24” shotgun tube to suit. Yes I know the Yanks would never do it, but it would make the Model 42 far more marketable, as would more calibre choice as with the older Model 24.

However, for what it is I rather like this quirky yet practical little combination!