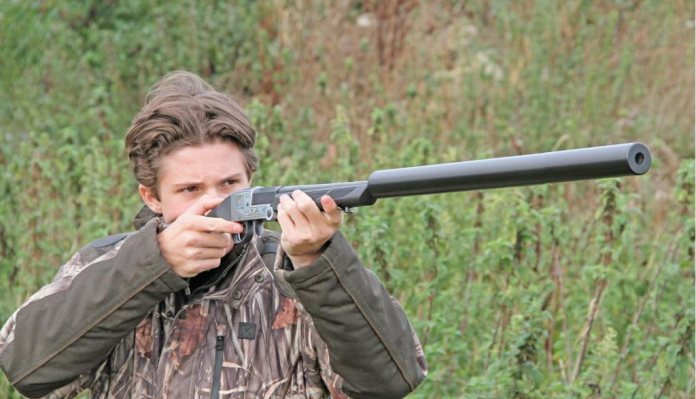 York Guns supply the Stealth range of silenced shotguns, primarily pump actioned Mossbergs with the favourite calibres being 410- and 20-gauge. However, the older designed single shot break open barrelled shotguns in 410 are still very popular. In the past Baikal single shot 410s have been used but with the advent of cheap and well-made shotguns coming from Turkey, York Guns have now Stealthed the Adler single shot. This is a traditional break open design that folds in on its self, aka poacher’s gun style, and wears the std 410-gauge Stealth silenced moderator. You also have a synthetic stock, ambidextrous shotgun and all for a price of £329.

I like a wood stock because it balances a gun better when a moderator is fitted and it feels warmer and less ‘hollow’. Having said that, a synthetic stock design keeps the weight down overall, again especially if a mod is fitted and the benefits from weather resistance and day to day hunting abuse cannot be ignored.

The forend is quite solid and moulded in a black colour with two separate checkered panels to each side. The checkering is quite good and actually raises above the panels so does grip unlike some moulded in types. The length is short, which is handy for a Stealth moderator fitment and is attached to the barrel via the screw in sling swivel arrangement. It also has a short deep recesses underneath which allows the trigger guard to slide in when the Adler is broken fully in the carry mode.

The rear butt stock is a more-hollow design with two moulded halves cemented together. It feels better than most, to be honest, again moulded in a black finish with twin checkered panels to the pistol grip. This is quite slim but fits even my large hands well. There is no palm swell and the whole design is very ambidextrous which is accented by the fact that the moulded in cheekpieces is event on both sides of the stock. Its sited on a low comb stock design but raises slightly to each side to rest the cheek. The low comb helps aid in aiming (see pattern test later). Another sling swivel is fitted and a slim black rubber recoil pad with checkered area section finishes off the stock. The length of pull though is short at 13.56-inches, a bit short but of no concern on this type of shotgun.

The std barrel is a typical 410 profile, i.e. slim. It’s a full 26-inches long and with a matt blued finish. The full choke is retained the same full configuration as most of the Stealth shotguns to keep the shot column tight as it passes down the sound moderator, so good for fibre or plastic wadded cartridges.

It is a non-ejector configuration, so as the barrel is opened an extractor bar pushes the 410 cartridge rim from the chamber wall and presents the empty case to you so it can be easily picked out. This is a three-inch chambered barrel and so can shoot all 2-, 2.5- and 3-inch magnum loads with ease.

At 11.75-inches from the chamber end is a large 1.35- inch diameter aluminium fixing collar fixed to the barrel This is replicated at the muzzle end with another collar of 1.35-inches diameter. In between these two collars the barrel is ported 10 times, five holes on each side with 5mm holes these allow the hot gases on firing to enter the aluminium shroud. This is 1.5-inches in diameter and is one piece and 22-inches total length, and when fitted it extends past the muzzle by eight inches and the moderator mounts to the threaded section of the rear aluminium collar and supported on the front one.

Those ports in the barrel bleed off the expanding gases to vent down the rear section of the moderator cooling as they go to reduce the overall noise levels. The remaining gases still behind the shot charge and this residual gas then is retarded in the 5-inch baffle stack in front of the muzzle. This can be removed by unscrewing it from the front for cleaning if desired. It is a one piece milled aluminium and has five circular holes drilled from one side to the other of 0.75-inches diameter each that form expansion chambers and baffle sections, thus aiding in noise reduction.

The action is pretty simple and like most break open designs where there is a single large recess come mon bloc type locking lug that locks into the large release catch/spur when closed. Pull back on this 1-inch steel spur and the barrel drops down open swivelling on a large hinge pin. The action itself is a block of aluminium with an acid etched design scrolls, flighting game and a landing eagle! All on a highly polished silver background! A bit too much for me but its just looks.

The trigger is cocked when the locking catch spur is pulled back and the trigger itself is a smooth black metal blade. Its heavy as usual at 6.5lbs weight but no problems as the internal hammer strike is hard and each primer is well ignited.

A cross bolt safety is sited in the rear of the trigger guard and blocks the trigger if you need it. Its just as easy to keep the action open to be extra safe.

There are no sights, even on the silencer shroud so how do you aim? As with all cylindrical type sound moderators that protrude above the bore axis and in the line of sight if you use the top of the shroud as an aiming point the shot will go low. To get a good centred pattern with the Adler is actually easy as the rear of the action has a small groove at the back before the action slopes down. Use this as a sighting rib and both eyes open and the shot pattern will be central.

This is a full choke barrel of 26-inches and I set up the pattern boards at 25-yards.

I used a subsonic (below the speed of sound) load, being the Eley Extra 3-inch subsonic. This uses a load of 18-grams or 5/8oz of No 6 shot size and was quiet in the Adler, a dull muffled report. I had a total of 87 pellets strike the boards distributed with 56 outer strikes in 30-inches and the other 31 pellets within the inner 15-inches. Welldistributed and hard hitter.

Next were the Supersonic Fiocchi 3-inch magnum, a very good all round 410-gauge round that had a payload of 19-grams of No 6 shot size. This shot a total of 77 No 6 shot pellets with 20 inner strikes and 57 outer strikes and more dispersed than the Eley load, still a good all-rounder.

Another good subsonic load is the Lyalvale Express Magnasonic, again a 3-inch case with 17-grams of larger No 5 shot. A generous 87 pellet strikes at 25-yards distributed with 67 outer hits and 20 pellets within the 15 inner circle but a bit wide spread. This was the quietest load tested, just a very dull thong noise, impressive.

Finally, a smaller 65mm or 2.5-inch Target load from Gamebore. This uses 14-grams of No 9 shot and is primarily used for clays but I like it for rats and ferals. In the Adler it did not shoot well, I repeated it and still got a very biased left and high pattern of 78 pellet strikes with 13 inner and 65 outer – just shows you need to test everything.

Interesting very similar pellet totals between 77 to 87 for all four cartridges but distributed in very different ways through the Adler which is why it is always wise to pattern every load to ascertain the best load for your shotgun.

The Adler is a very capable shotgun made better with the addition of the York Guns Stealth sound moderator. You have a simple break barrel design that is well made although a little flashy on the exterior. The synthetic stock is light but very practical for a shotgun aimed at the vermin control market and the noise reduction from sound moderator with subsonic loads was very impressive. Good value for only £329.