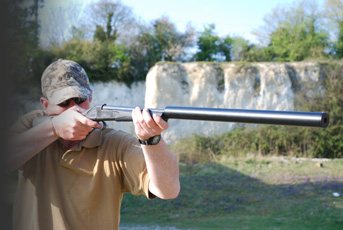 These days it seems you can get any form of firearm moderated and that includes shotguns. More pest control tool than hunting gun, they are useful and popular with the shooting community. In fact these have been around for a few years and in that time I have seen pump-actions, single-shots and even doubles.

The gun I have here is probably the most cost effective – that being the single-shot/break-barrel. OK not very sexy, but a reliable and practical tool none the less. This example uses the Baikal IZH-18M-M chassis but as opposed to the rather workmanlike beech or birch they seem to use on all their smoothbores this one shows a more modern approach with black, synthetic furniture. Visually and in handling too this does make a positive difference.

For obvious reasons York Guns (the Baikal importers) calls this model the Stealth - a name it certainly lives up to. The Baikal is a simple and no nonsense design, which in my opinion suits the gun’s role admirably. The action is an under-lever with a lug at the rear of the trigger guard being pulled upwards to open the action and cock the internal hammer. This is physically witnessed by a white, plastic rod that rises up from the tang to show the gun state. This is backed up by a cross-bolt safety at the rear of the guard.

Typically the Stealth is a non-ejector with the fired case being raised about ¼” from the chamber where it can be pulled free by your fingers. Not a big deal given it’s a single shot! Having used the standard, wood-stocked IZH-18M-M before the substitution of the badly stained, beech-like timber for the better designed, black synthetic pattern; not only looks better but also to my mind improved handling.

The pistol grip is ridged for a better hold and feels fuller and the inclusion of a Browning Cynergy-like recoil pad really sets off the butt and is a vast improvement over the old bakelite thing of the earlier versions. The forend too, though still triangular in section just seems that bit more tactical and practical in use.

If you do not know how they suppress a smoothbore let me explain. The moderator as can be seen is large and consists of a rear expansion chamber and a forward baffle stack. This pushes total barrel/can length to around 40”, given the actual gun tube is 26.5” with another 13” of moddy up front.

Removing the can shows a rear/sealing bush just ahead of the forend that the moderator tube screws on to, with a second stabilising ring at the muzzle. The barrel is simply, multiple drilled between these two points so that firing gasses exit into the expansion chamber then bleed through into the baffle stack. Like a 22 sub-sonic a shotgun is relatively low speed so will moderate pretty well, certainly something like a .410, which is using less powder and shot than a comparable 12-bore.

For the test I used some normal, Winchester 3” #6 shells, which are rated as some of the best around and also some from Game Bore too. Sub-sonic 410 is also available. To load – squeeze the under-lever up and open the gun, slide in a shell and close the action, set the safety and you’re ready.

Even with the 3” Winchesters, moderation effect was pretty good with the Stealth making a loud thud as it went off, which was much reduced from the normal crack of an un-moderated gun. In terms of effective range 25-yards was easily achievable with a good pattern striking around the aim point, so no problems on rabbits at that distance.

A bit different and perhaps of more concern to those who aim like a rifle is the thickness of the moderator body. There’s a simple brass pin sight screwed into the top/front of the can. However if you aim ‘pin-on’ then you are in fact probably pointing lower. I found it more effective to near block out the target with the moody and in that way the pattern tends to hit more centralised.

Though quite lengthy the Stealth has none of the bulk/weight of a moderated 12-bore so is easy to carry and use. The only real pain is the fact you have to pull the empties free by hand but in truth it’s no big deal. One thing I would advise is to clean the moddy regularly after use, as a lot of crap gets deposited inside and that builds up very quickly. Also consider that the front and rear bushings are aluminium alloy, as is the suppressor body and that has a habit of binding up (galling) even when clean. When dirty with powder/shot residue jammed into the threads it can build up to such appoint where the can is pretty much stuck on for ever.

I don’t use a moderated shotgun that much and if I do then it’s rabbits that are my main quarry so a 410 out to 25 yards is the best bet. So I’m not interested in getting a more expensive pump-action or even a 12-bore single, which is why the Stealth suits very nicely at well under £400.

Overall this is a cost effective and practical design for a simple, moderated shotgun and one well worth consideration if you have the need.