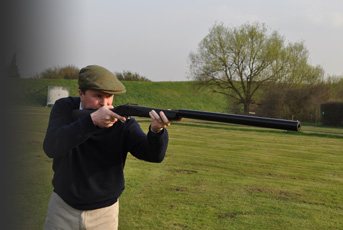 Some guns just make you smile, this is one of them as the Hushpower moderated .410 is a great piece of kit! I might as well tell you this at the beginning as at the end, and I only say this when I think a gun is something really special. Yes it’s built on a cheap, or, should I say inexpensive but solid, synthetic stocked, Baikal, single barrel, but it really is simply brilliant with the emphasis on the simple!

To cut through any confusion; though the concept of moderated shotguns can be credited to The Saddlery & Gunroom at Westerham in Kent who offer pump-action, single and even double barrelled guns. York Guns also offer the Baikal Stealth too.

Called the Stealth - this fully moderated design well, it looks smart. First impressions are good with its blacked metal and synthetic stock. It also feels good when you pick it up. Cutting to the chase and we will return to this subject even with standard velocity cartridges it is VERY quiet (2 1/2” or 3” it makes little difference) and shoots instinctively. The gun’s all-black finish gives it quite a deep, dark and dangerous appearance, but you can have one in good ol’ fashioned wood too, and just for the record, I have and am very pleased with it.

What is this going to cost you? Only £322, which is a bargain considering how functional it is and the engineering expertise that has gone into its original design and subsequent conversion. Baikal-based models are available in 20 and 12 bore too. They also offer the pump-action Mossberg 500 models in .410, 20 and 12-bore too from £568. Plus there is an interesting and unusual over & under 20 based on an Investarm at £784.

The thing that sets the Baikal and the Mossberg .410 models apart are their handing qualities. The former in particular feels surprisingly lively as well as very pointable with its long sighting plane. It has a 26” barrel covered by a sound moderator, which may be disassembled for cleaning. Effective barrel/moderator length is about 35” with an overall of just over 50”. It does not feel that long though as it’s a single-shot, break-barrel layout, whereas a comparable Mossberg pump is longer as the moderator can only go back as far as the barrel securing ring, which imbalances it a bit.

The Hushpower weighs in at about 6 1/2 pounds, which is ideal, being not to heavy or light. I think herein lies the secret of its good handling and shooting qualities, single barrel .410s are often far too whippy. This one isn’t. The sighting picture offered along the tube – there is no rib, just a brass bead of squashed chess pawn form at the muzzle – is very good. It certainly worked for me. I might say that about just about every other aspect of the design too.

The action, which is of non-ejector pattern, operates by means of an under-lever. The latter is ergonomically shaped and easy to use. One squeezes it towards the grip to open – about an inch of movement is required. There is cross bolt safety to the rear of the trigger positioned inside the guard, of its type it is one of the best that I have used. It is well placed, and, positive but not too heavy in action. The trigger blade is quite small, but well-shaped – it suited my hand/fingers perfectly. The pull was surprisingly good. On the top strap there is a (very useful) cocking indicator (which can be felt when light is fading). Thanks to the snap-action under lever design, the gun is extremely easy to take apart or put back together.

The barrel, which bears Russian and Birmingham proof marks, has a single lump which locates on a cross-pin. Lock-up is brilliantly simple with a bolt to the rear coming through a cut in the bottom of the action face. The lump comes down compresses a spring and meets a triangular bite. Why are the Russians so good at simple? AK47s, T62s, Sputniks, and Baikal single barrels are all works of engineering genius. KISS in action.

The design of the barrel and moderator assembly on this gun is down to Hushpower’s Bob Hurley. Bob told me: “The gun has a fairly short, choked barrel from the factory, and we do not interfere with the length, but we do port it. On the .410 there are five holes spaced along the barrel - well away from the choke area. They are 4.5mm in diameter. Within the body of the enclosing moderator tube, there are to the front four baffles which are fitted at the end of the moderator and bear against the front bush and end cap which also has a tapped hole for the bead. The rear moderator bush is permanently fitted to the barrel – by a close tolerance interference fit.”
As for the stock, the basic shapes were good with a comfy and practical comb and grip. There was not too much drop and the length of pull is about 14 ¼” a little short perhaps, but I did not notice. With the rest of the gun being quite long, I think a little on the short side makes it all the more user friendly. I also like the Deeley, pull-down forend latch, and, the shape too. On the wood version about 2” is removed to increase the moderator’s expansion chamber length not in this case, though.

I really rate this little gun and apart from being fun to use on clays – astounding any on-lookers – it is a superb working tool for anyone involved in pest control. It allows for shooting near built up areas (where proper permissions are in place of course) and it is an untiring gun to use because of the lack of noise and recoil. It would also be an ideal for instructing gun-shy beginners, and, for corporate entertainment.