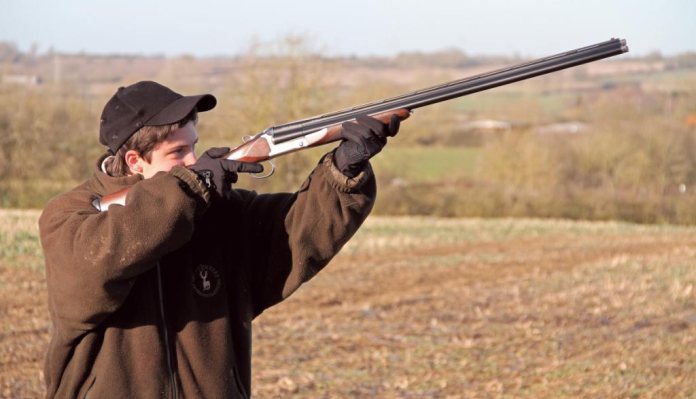 Great, another 410-gauge! Along with the 28-gauge, it’s my favourite shotgun calibre, being a rifle man at heart. We all had a 410-gauge of some sort in the dim and distant past and whether you think they are toys or not, they are always good fun to shoot.

The Akkar range of shotguns emanate from Turkey, like so many shotguns these days, but they are really well made and have some good features and interesting models. None more so than the Akkar Triple Crown as its name implies, has three barrels! Yes, it’s a fun piece but actually when you have shot it you will be scratching around looking for cash to keep it, I promise!

It is available in .410 to 12g calibres, so a great choice for all manner of applications and has barrel lengths of 28- and 32-inches, although some models will be limited stock.

You also have a traditional walnut stocked, slivered action version as well as a camo clad wildfowl version, which I hope to test on some Scottish Geese later in the year. This model 410 is catalogued as the Mammut Model 336.

It’s great, I had several high-end rifles and shotguns in for test, but I put them all on the back burner to get out with the Triple.

First up, the stock is, as you would expect from a Turkish gun, puts many a more expensive gun to shame. The Akkar Triple has a dark walnut with plenty of figuring, with contrasting grain and colour. It also has a very nice rubbed oil finish that improves with age and gives an authentic classic shotgun feel and smell!

It’s a nicely proportioned stock too, with a good weight but it’s not heavy and allows a balance point just ahead of the barrel hinge. You have a length of pull of 14.5-inches on this model, topped off with a solid black rubber recoil pad with crinkle finish for extra grip.

The comb is standard height and there is a small amount of cast, but still okay to shoot left-handed if necessary, coming around the wrong way of a brick wall for instance. I particularly like the pistol grip, as it has a good long rake to it, as I have big hands and often hunt with gloves on. There is a small palm swell to the right side and the chequering panels are laser cut and well-defined.

The forend has that classic side-by-side semi beavertail wide profile. It is shallow but wide enough to comfortably accommodate a hand with the same style chequering to both sides. To release, there is a button type catch at the tip, which when depressed releases the forend and allows the barrels to come off.

This 410-gauge model came with 30-inch barrels and gave the trim Akkar a good turn of speed and lovely swing to it. They are chambered for 3-inch cartridges, so any length of 410-gauge ammo can be used. The barrels are nicely soldered together, with a tight fit of two below and one sitting astride up top. There is a ventilated rib that runs full length and is smaller than the 28g model at 5mm in width with a serrated top and single Day-Glo red foresight.

Despite the three barrels, it’s still light but heavier than the 28g, as there’s more meat around the barrels and balances amazingly well and with a single barrel on top it sights like an auto or O/U shotgun model. I also like the finish that is smooth satin black that look smart and is handy for hunting to stop reflections and is pretty scratch resistant too.

Choke-wise, there are three options obviously in situ and you are supplied five with the gun, cyl, ¼, ½, ¾ and full. So, you can set up the barrels as you like. The 28g version had flush fitting chokes but the 410 has extended chokes; these are similar to Remington chokes but are slimmer and longer, so not interchangeable and stick out by ½-inch. They have a knurled front section, so you can finger tighten or remove them but because the barrels on the 410 model are close together they are very fiddly to get out! Plus, I have never liked the extended design, as it spoils the overall elegant lines of this Akkar Triple Crown.

Finally, the Akkar is nonejector, as ejectors would be expensive but it does take a while to load and reload, although I did manage a technique to grasp all three fired cases at once. One thing missing on the 410 model was a set of sling swivels that I liked on the 28g model, as I quite often sling a vermin gun before I get into position out in the field.

The all-steel action is gracefully machined, which, when viewed form the side, looks really quite low-profiled, despite having three barrels stuffed in it! The finish is a brushed steel look that again I like and is far better than most and the lack of engraving improves the look, in my view, with just ‘Triple Crown’ on the bottom.

The action type is your typical monobloc construction, with the forward locking lumps held in place by the large cross pin that acts as the hinge pin. The slotted rear lug engages a sturdy cross bar that locks up tightly but opens with a reassuring stiffness. The barrels are attached to this ‘monobloc’ at the chambers and the join is masked by a continuous chain link engraving.

The top lever to open the action is large and has a ventilated profile in brushed steel, which looks good and the hollow design gives a good grip too. The safety is nonauto, my favourite and has a raised circular operating button for rear as SAFE and forward, exposing a red dot, for FIRE.

The trigger has a gold washed finish and is smooth with a good curve to it, to nestle the finger pad and there is a similarly large rounded trigger guard to facilitate a gloved hand if necessary. The firing cycle is interesting. With one trigger blade only and no barrel selector you have to shoot the barrels in one sequence only.

One pull of the trigger and the right barrel fires, a second pull and the left barrel shoots and finally the third pull fires the third, top barrel. But with this sequence you have to have the chokes fitted the way you like them. Due to the sequential firing, you can set up the Triple with open chokes first and then getting tighter for normal use in the field or swap around for tight and getting more open for incoming game.

The firing sequence is actually quite quick but you do need to allow the trigger blade to return to station for the subsequent shots. This is fine but this trigger was heavier than the 28g tested last year.

I had the Triple set up as Cyl (true), ¼ and ½ choked; so, pretty open choked, which I prefer on a 410, as it makes you shoot close range and have even patterns that full choke can blow some times.

Usually, I set up pattern boards but I also set up cardboard rabbits at differing ranges and walked through the woods, picking them off as you would if rough shooting.

This is a plastic wadded 3-inch case, loaded with 19-grams of No. 6 shot and is a fantastic 410 cartridge that I use regularly. Superb patterns with this load of 111 pellets within 30-inches spread, with 56 outer and an even 55 inner strikes. That’s a ½ choke too. Really good, even with the cylinder choke at 25-yards, with enough pellets hitting a rabbit to dispatch.

Remington’s 3-inch offering has a 11/16oz or 18-gram load of No. 6 shot. These are expensive but really good, hard hitting 410 rounds. I had a great 105 total pellet strike, with an even 57 outer and 48 inner pellet distribution. On the rabbits, a good density of shot around the head and neck section.

Three-inch plastic cases hold 18-gram load and a shot size of No. 6 and the velocity has dropped to below 1050fps average for subsonic use. I like to use these in any 410 gun, silenced or not, as they work well.

The heavy payload of 18-grams helps here and 115 pellets hit the board split 68 outer and 47 inner; again, on the rabbits, a good density for some rabbit pie.

All cartridges functioned very well and recoil was non-existent and quick fire plinking at static clays, plastic water jugs and cardboard cut outs really made for a fun few days, or an expensive one, as 410 ammo is quite pricey!

Having shot the 28g Triple last year I knew I would enjoy shooting its smaller brother. I was not wrong, the .410 was more fun than the 28g, which I loved. The 410-gauge has a lot of uses for vermin control and is great fun around the farm and barns for ferals and as well as squirrels jumping through the trees. Fast, great patterns the Triple is a unique solution to the semi-automatic three shot alternative. If I were to be super-critical, the barrel selector and ejectors would be nice but too expensive, as the guide price of £1690 is all its money and out of the reach on many. Still a lovely little 410-gauge.