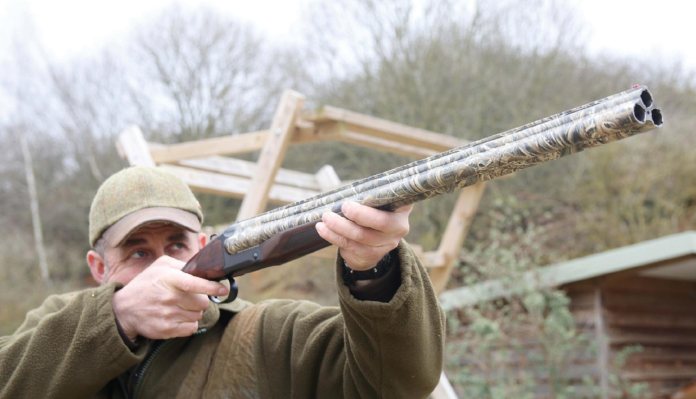 The old saying goes ‘don’t judge a book by its cover’, but I am afraid I could not help uttering the words “what in the hell am I going to be able to say about this monstrosity?” The cause of this uncharacteristic outburst was the Triple Crown from Akkar of Turkey, imported by Edgar Brothers.

Two down, one up

The Triple Crown is well; a side by side with an extra barrel on top. This model is the half camo version, the metal work is Realtree dipped with a fairly good piece of oiled walnut. In the flesh, the contrast is startling, but despite this, the gun became more aesthetically pleasing the more I looked at it, which seemed wrong somehow. It all goes together just like any other break-barrel shotgun with stock, forend and barrels, and not expecting much, I put it to my shoulder, only to be pleasantly surprised!

The gun looks like something that should be unbalanced and ungainly but it’s neither; in fact, it felt rather good! The point of balance is slightly in front of the hinge, which would normally be enough to make a gun seem unbalanced but that is not the case. The impression is of something that’s going to be heavy, and weighing in at 8lbs, it’s no lightweight, but still handy.

The barrels have been Realtree Max 5 Wetlands camo-dipped, the action and other metal work is a dull black, and other than the Triple Crown name on the underside, there is no other decoration. The wood is really good, and pretty much every shot gun that comes out of Turkey nowadays has timber on it that one would expect to see on something that cost many times the price! It struck me odd that it wears this two-tone finish, as opposed to full camo, as you’d expect on a waterfowl gun. The length of pull comes in at 14 1/2”, the forend is wide enough for even the largest hand to get a positive grip on, but the pistol grip is not too big that the shooter with smaller hands would struggle too much. Chequering is the commonly found diamond cut, which has been dulled off, probably a little too much with this gun as cold, wet and muddy hands may struggle to maintain as firm a grip as is required.

The barrels are 28” and multichoke with five included, from skeet to full. They are proofed for steel in no larger than #2 shot up to and including half/modified if using larger shot; then nothing tighter than quarter/improved cylinder should be used. If you are going to use bigger than #2 in steel, you need to order an extra choke to make use of all three barrels!

The order of fire is; right, left and top, with no way of changing it. On the downside, this is a non-ejector, but I should imagine making a triple barrelled ejector would be quite some task and doubtless raise the price. The safety is manual and a substantial lump, which does mean that your finger can’t slip over the top of it when attempting to move to the fire or safe positions. There is a single trigger, which seemed to break consistently and had no creep, although it was a little heavier than I am used to.

There’s a sensible and modest top rib with a high-vis bead at the end. After adding a removable stock lengthener, my first step was to shoot all three barrels at paper to see how they patterned from one to the next. This proved to be an eye opener, with the shot from all three landing predominantly in the centre of the paper at 30m. Now reassured that the Triple Crown should shoot where I looked, I took it with me on my trapping rounds and in the pigeon hide.

This gun is undoubtedly a little on the heavy side for walking around all day, but lent itself very well to being used in a hide. Having said that, I feel that if you were to have a busy day with lots of shooting, mounting it repeatedly could prove tiring. The gun shot very well and pulled down some pigeons, I was very pleased! And it did not take much getting used to, although having been used to ejectors, despite the fact that the fired cases are well presented, remembering to pull them out did take a bit of concentration. And yes, I did manage to try to load fresh cartridges when the fired ones were still there!

Despite what some might think, and in fairness, until I had used one I also thought, the Triple Crown was one of those guns you would look at a picture of and think this is not for me, but I was wrong! I had a great deal of enjoyment using it whilst doing the testing. The only bad feature for me was the stud on the underside of the barrels to attach a sling to, it’s just in the wrong place to catch a finger of the leading hand on and its presence would be more understandable if there was also one on the butt but there’s not!

The Triple Crown does undoubtedly have a certain amount of charm about it in a way that is hard to put a finger on! It shoots far better than expected, and if you do judge a book by its cover, this would be a book you would not read, but that would be your loss! For those that want the opportunity of a third shot ready to go, in a strongly built, break-barrel shotgun but do not want to join the auto or pump club then have a look you might just be pleasantly surprised. These guns are available in several finish options and in 12, 20, 28 and .410 bores.