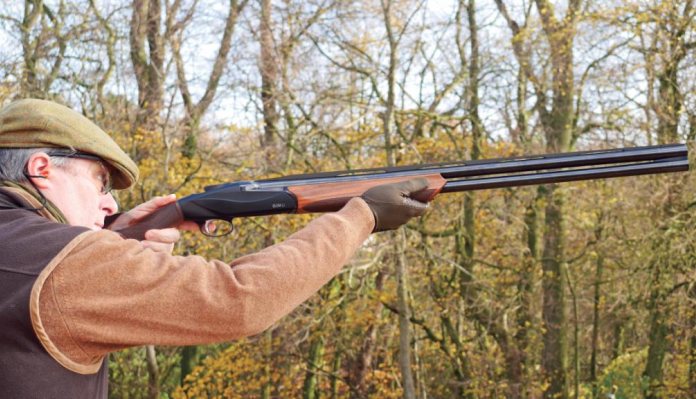 I’ve wanted to try out an 828U for ages. Why? Firstly, Benelli’s inertia-driven guns have been my semiauto of preference for over two decades, confirming the company’s ability to design and manufacture stylish, handy and durable guns. Secondly, as a game shooter brought up on English side-by-sides, I find most 12-gauge over-andunders (O/U) heavy and over-bulky: not so the light, sleek 828U. Thirdly, being left-handed, a cast-on stock improves my hit rate, and the 828U is unique among O/Us in offering a semiauto- style shim-based cast/ drop adjustment system.

So far very logical, but deeper down, the reason I wanted to get handson with this gun is that every element buzzes with genuine, conventionbusting innovation and that always brightens my day.

A more recent reason is the demonising of lead shot. With many shoots going exclusively ‘non-toxic’ and cartridge manufacturers hesitant about claiming any steel load as suitable for classic guns, the only alternative – barring forking out to scatter fields with rare metals - is to tool up with something modern, preferably bearing the fleur-de-Lys stamp that designates ‘High- Performance Steel’ proof. The Benelli ticks that box too.

OK, so I mentioned innovation, but the primary challenge Benelli’s designers set themselves is both ancient and fundamentally Newtonian: how do you make a gun that is simultaneously light enough to handle and carry well, strong enough to shoot effective loads, and so well-mannered that the recoil feels more like a friendly handshake than a slap in the face?

To achieve this Benelli literally took a lock-stockand- barrel approach.

Let’s start with the ‘lock’ bit. The action body is a lightweight aluminium monocoque that hosts a pair of replaceable ultralow- profile barrel trunnions and a floating breech face (a.k.a. lock plate) made from hardened and chromed steel. Aficionados of German drop-barrel (kipplauf) rifles will recognise this as a ‘Jaeger’ type closure: a design created to handle the high pressures generated by fullbore rifle cartridges that will take even the most lively shotgun shells in its stride.

Unlike a conventional action that relies on the strength of the action body to hold the barrels against the breech, a Jaeger action seals the chamber ends with a ridge-and-groove interface that locks the barrels and breech face together into a single pressure-containing unit whose strength is independent of the mass of the action body. In different ways, AR15 and Blaser R8 rifles do a similar thing: locking the bolt head into a chamber extension to permit the use of a lightweight alloy receiver.

More weight is saved behind the breech face, where a cavernous space houses a detachable firecontrol module in which everything that doesn’t need to be steel is lightweight alloy. It also features a pair of in-line hammers that align directly with the sprung strikers seated in the rear of the lock plate: a far more rational arrangement than the angled layout characteristic of conventional O/U actions, and one that eliminates any risk of a striker binding. Trigger pulls are a nice 6 lb (a bit heavier for the top barrel) and acceptably clean.

The stock is also light due to an internal cavity that houses the recoil reduction unit -also made from lightweight polymer-, and having a soft polyurethane insert in place of a solid wooden comb.

Up at the barrel end, the weight saving is all about the ribs: because the midrib isn’t there at all and the sighting rib is made from carbon fibre. Using this material confers a further benefit since not having to braze the rib on means it can be easily swapped out for a taller version if desired.

So the gun is light and very strong. But surely there’s no such thing as a free lunch, in gun design or anywhere else, so it must kick like the devil, right?

Except it doesn’t. Firstly, because of the stock shims. Poor gun fit increases felt recoil, and insufficient drop is the main culprit, but the 828’s three-tiered shim system lets you go from 42.5mm to 65mm of drop in 2.5mm increments until you get the perfect fit. Secondly, the polyurethane comb cushions any residual impact to your face. Thirdly, the recoil pad, which is good and springy in itself, is linked to Benelli’s ‘Progressive Comfort System’, which mitigates energy transmission to the recoil pad. This little black box houses four overlapping polyurethane combs whose vanes literally ‘feather out’the rearward impulse.

Ingeniously, heavier recoil generates increased resistance, resulting in a progressive push instead of a sharp punch.

OK, so you’d think that having squared the circle of designing a gun that is uniquely light, strong and comfortable to shoot, the boffins at Benelli would take a break. Not a bit of it. Instead, they set about rethinking the even more fundamental processes of cocking and ejection.

Ever since Anson & Deeley patented their ‘boxlock’ system in 1875, break-action shotguns have cocked by ‘the drop of the barrels’ (Beesly/Purdeys excepted), but this requires a good deal of cam, rod and lever work at the front of the action body. The 828U’s minimalist action body ruled all this out, so sophisticated geometry and a specially-designed firecontrol group were combined to enable easy cocking via the top lever. This was also facilitated by the absence of other mechanical systems within the action body: the exception being a pair of small locking pins that engage with the receiver extension and hold the barrels parallel with the action. Additional assistance is given by the lever’s smooth, curved design that simultaneously gives it a wider arc and makes it more comfortable to press against than a conventional straight lever with a small thumb tab.

Even as a left-hander, I found the lever gratifyingly easy to operate, but -in another mould-breaking move- Benelli also offer a left-handed lever as a factory option. As I write, I’m waiting to hear whether the three components required to change the orientation of a gun will be available separately to permit aftermarket conversion of right-hand guns.

Top-lever-cocking isn’t merely change for change’s sake, however. Without the braking effect of a conventional cocking-rodand- main-spring setup, and assisted –as we will see- by the ejector springs, the gun acts like a Beesly/ Purdey self-opener (but without the cock-on-closing effort required by that system) and literally jumps open when you operate the top lever. As you can probably tell, I like this. If you don’t, you’ll be glad to hear that this outstanding gun actually lets you adjust the speed of the drop via a set screw in the fore-end.

Better still, the lack of mechanical clutter at the ‘knuckle-end’ of the action body and the use of a floating breech permit a uniquely wide gape that gives unprecedented access to the bottom barrel. In short, no O/U promotes fast, easy reloading like the 828U.

Now for the ejector mechanism. Traditionally, this depends on a mechanical linkage between the lock and the ejector tumblers in the forend steel.

As we have seen, the 828U’s body design requires a different approach. Benelli’s ingenious solution was to drill a small port in each chamber, seat a tiny steel piston inside it, and cap this with a flat ejector sear, thereby using the expansion of the fired cartridge to trip the mechanism. So, if you try out an 828U, don’t be discouraged to find that your snap caps don’t eject after dry firing, as ejection after live firing is both reliable and powerful.

The ejectors themselves are powered by a pair of coil springs located in the valley between the barrels. These are cocked by wedges that are pushed forward by the steel trunnions at the front of the action body as the gun is closed. Naturally, as well as helping the gun spring open, this produces some resistance to closing, albeit less than on a Beesly/Purdey.

I hope I’ve done some justice to the sheer genius of this gun here, but of course, none of this matters if it doesn’t perform in the field. Lockdown limited my field-testing time, but the gun (kindly supplied by Shooting Supplies of Bromsgrove) produced satisfyingly even patterns through all five choke tubes (three of which are suitable for steel) and knocked down geese, ducks, pheasants and crows in style. And when not shooting I found it easy to admire the sleek lines of the unadorned black action and the well-figured walnut with its distinctive fishscale ‘Air Touch’ grip panels. The price is attractive too. What I really love about the 828U, however, is how it casts convention aside with total conviction, supreme intelligence and impressive panache.