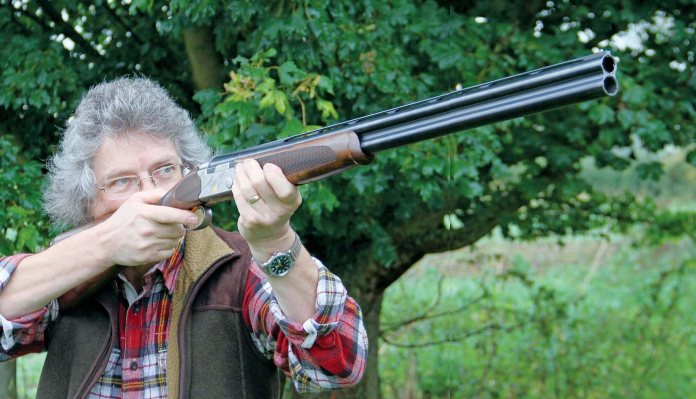 The Beretta 686 series of guns is Beretta’s go-to gun for game, clays or rough shooting, there is a model to suit everyone.This game gun, the Ultra Light Classic, has a lighter weight due to the alloy action and with 28-inch barrels, it weighs just over 6lbs 2oz, yet still retaining the unparalleled Beretta build quality and strength.

Not everyone wants a heavy gun for sustained fire i.e. clays, high count bird days or simulated game. If you are like me, the idea of a full-sized, yet lighter gun appeals as the years trot on! Yes, lighter weight may mean more recoil but this gun is designed to soak up recoil and is made for a more leisurely walked up or selective fire situation.

You have a weight saving from 7lbs 8oz on the Field 3 model to only 6lbs 2oz on this Ultra Light Classic, certainly worth having.

Starting with the action, the Ultra Light’s main weight saving is in this area, as it uses a receiver that is machined from aircraft grade aluminium. This starts life as a single block that is precision machined to form the 686 action and then is specially heat treated to gain a blend of strength and durability. This all adds up to a 65% weight saving, and if you were doubtful about continued use and wear, there is a Titanium insert set into the breech face to maintain a tight action.

You have nice typical Beretta side-locking lugs that rebate into the lowered receiver, secured via twin protruding bolts form the action face. This allows a lowprofile and tapered wear built in to maintain a stiff action, even after multiple thousands of rounds. The front pivots are twin pins sited in the action sides and allows a smooth opening to the action also.

The overall finish has brush polished faces, interspersed with geometric swirls and the addition of woodcock and partridge rising. There are also Beretta logos, which are accented in gold.

The top lever has striated lines for grip instead of chequering and all the adornments have a modern, stylish theme, which seems the norm these days. There is an auto safety system, so as the action is opened, it automatically sets the lozenge shaped safety. Within this is the barrel selector, with a raised serrated button that shows one red dot for the bottom barrel and two red dots for the top barrel by moving right to left.

The trigger is gold washed, thin and smooth and on this model felt very positive, with an instant let off, which I liked. This is an inertia system, so the recoil of the first shot sets the second barrel but with an unloaded gun putting the safety on and off can fire the second barrel if desired after pulling the trigger.

The wood on the Ultra Light is reasonably plain but it is still nice with a dark walnut and matt lacquer finish to it and this model had some nice simple figuring to both sides. The Beretta slim black recoil pad that has a micro core internal section does dampen recoil well and gives the Ultra Light a length of pull of 14.5-inches.

The chequering panels adorn the forend and pistol grip with precise laser-cut design, which is pretty standard now and as such allows unique patterns. This was the case here, with the Ultra Light having quite unique chequering of chain link or semicircular linked raised edges. They look interesting but were a bit shallow for a good grip though.

The forend is slim and 10-inches long with a semi Schnabel forend tip that allows a hold that naturally falls with a rested hand against this tip. It’s a pretty standard design with no frills, but comes up very well and has that instant correct printability which is after all one wants from a shotgun. You want it light and fast for darting woodcock in the woods.

Barrel lengths are available in 26- and 28-inches and I believe the Gold version has a 24-inch option too, great for thick cover. I had the 28-inch version and they are made from Beretta’s own cold-hammer forged steelium material, which is an alloy providing lightness yet strength and thus contributes to the fast handing properties. This is further enhanced in this model due to the central barrel rib being void for 8-inches from the action end, to reduce weight further.

The bores are enhanced for durability by being chrome lined and steel shot proofed and five chokes are provided, so all bases covered in the field. They are marked Excelsior H.S.A Steel.

Although I fitted ½ and full for the tests, in the field with a lighter load I would go true, ¼ or ¼ and ½ for close range woodcock walked up or close in rough shooting. The rib has a full serrated width and is 7mm wide and has seven vents along its length of medium height and a single silver bead at the nuzzle for sighting. Ejectors were really well timed and very positive, so no stuck sticky cases in any weather here, even when hot and are set off nicely against the jeweled faces.

The 28-inch barrels certainly may not provide you with more sustained swing on game as 30-inchers would but the lighter weight allows very fast handling and mounting. With shorter barrels, you can have less momentum but this Ultra Light has a great in line natural hold and familiar mounting so no problems. I would probably go shorter in truth.

I fitted ½ and full chokes and set up pattern boards at 30-yards and patterned on ½ choke to see the average shot count and spread between a variety of cartridges.

Weight-wise it’s a good blend between fast handling and recoil damping and certainly it was very comfortable to shoot; with the excellent handling, the recoil was straight back and not in your face.

I selected an array of typical 12-gauge fare for testing, these included:

I keep saying this in tests but the old Grand Prix, despite being long in the tooth, still provide superb patterns with up to date formulations of manufacture. The Ultra Light barrels loved this load of 32-grams and spread the No. 6 shot evenly across the 30-inch pattern board. I had with the ½ choke lower barrel a total of 236 pellet strikes, so dense accumulations with plenty of pellets; 75 in the inner 15-inch circle and then 161 around the rest of the board. Good all-round load and despite 32-grams no too bad on recoil either.

This was the plastic wad load and I had a tighter pattern as expected but a bit low on the board. Still a good total pellet strike of No. 6 shot of 243 pellets, with a distribution of 83 inner strikes and 160 outer sector hits. This is great pigeon load but you would need to aim slightly high with this Ultra Light and load.

Another low shooting load with this gun. I had 174 total pellet strikes, with only 38 inner strikes within 15-inches and 136 pellets in the outer sectors of which 50% were low. It’s just the way this load shoots in this gun not the load’s fault but good to know none the less.

This was by far the best loading combination with this shotgun and choke setup. Recoil was mild, despite the obvious good speed and the patterns were superb. More strikes obviously with the smaller shot size of No. 7.5 and a total of 295 pellets. Incredibly even density also, that repeated with dense 119 inner circle hits and 176 other 30-inch strikes with great distribution. What a great closer range partridge or vermin load, superb.

In retrospect, I should have tried a few light loads too, next time.

As with all Berettas, they have that really nice blend of handling and instant appeal that makes the gun feel part of you.

The Ultra Light is lighter than the normal and is made for a specific purpose of walked up game or selective shots. It’s not for clay busting or simulated game days, as the recoil is more and you will feel it. But, used as intended, it’s a lovely light weight, fast handling little game gun that would make a superb partridge or woodcock gun. It just feels very natural to use.