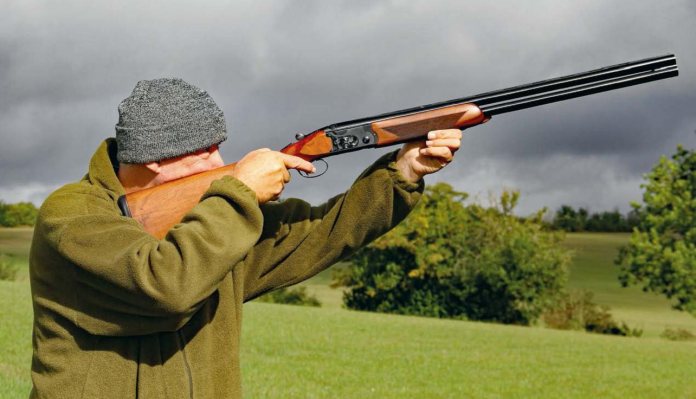 Who doesn’t like a lightweight gun? As the years roll on, I certainly do. I also like the walked-up style, which means a fast handling and light gun is an advantage, especially if on your feet all day. Most lightweight shotguns are slimmed down or have aluminium actions and steel inserts at crucial pressure points to achieve a sub-6 lb weight. Also, with steel shot so prevalent these days, it’s a good idea to future-proof yourself with a shotgun that is still capable of shooing high-pressure steel loads.

Well, Berretta has been listening to their customers and has produced a new and very interesting overand- under shotgun called the Ultraleggero. This new gun has such good balance that even with its lightened features, you can still use 30” barrels, which is the preferred length these days. The new gun replaces the Ultralight and comes in 12-gauge with 26”, 28” and 30” barrel lengths. 20-gauge versions are to follow as well as a ladies model.

Outwardly, the action resembles the 690 series and possesses a positive locking system that incorporates twin locking lugs and trapezoid shoulders.

The Ultraleggero action is constructed with hardened steel (not aluminium) and is skeletonised with milled slots to lighten the sides and bottom of the action. These milled-out recesses are not left open but are fitted with polymer inserts that feature a floral design. The clever angled sections reflect the light and shade, just as steel action would. This contrasts well with the matte-black burnishing on the action, which I like. Plus, the polished black hinge pins really look typical Beretta, but with a very modern twist. No compromise has been made to the integrity or strength of the action and this Beretta is still capable of shooting thousands of high-pressure rounds.

In use, the gun feels very precise and opens and closes tightly but easily, with perfect barrel-to-action mating - a sign of well-engineered components.

You have an automatic safety system which is quite a good idea if this is to be used primarily as a walked-up gun, as you know it’s safe after loading until you need to fire. The barrel selector is swift and silent to use, with clear red and white dots indicating which barrel is to fire first (red dot is live).

To further lighten things, the trigger guard is made of aluminium and the trigger itself is very crisp for a shotgun. In fact, the whole action just works very well as a unit.

As I have already mentioned, there is a choice of barrel lengths. I like the 28” option as a good all-rounder and they were fitted to the test gun.

Regardless of length, they are all made with 3” chambers, so are good to shoot cartridges up to 56-grams. Plus, the Fleur-de-Lys proof mark means that you can use lead, steel or high-performance steel.

The Steelium Optima Bore HP barrels show a nice and slim 6mm wide rib, which is ideal for game, as it sights beautifully with the steel foresight and does not obscure the game whilst in the aim. Interestingly, to further reduce weight, this shotgun has no mid-rib, which looks nice in my eyes and does contribute to the Ultraleggero’s very nimble handling.

The external finish is nice, deep and even, without being too bright. Plus, it contrasts very well with the matte-finished action.

Internally, you have an 18.6mm bore with a double 80mm forcing cone that enables the shot column to pass down the barrel uniformly. This means that there is less chance of the pellets clumping, resulting in more even patterns combined with less recoil and also a little less muzzle flip too - ideal for a quick second shot.

The Ultraleggero uses OptimaChoke HP chokes that measure 70mm in length. They show a flush fit and the gun comes with five in total, from cylinder to full, with steel shot being fine up to ½ choke as usual. You also get some gun lube, a decent choke key and a set of sling swivel attachments, which I like, as I carry a shotgun like a rifle anyway.

The forend on this model is very different and harks back to the 694 models, where you have the twin forend attachment points on the barrels, so the pressure is evenly placed on the action face and can be adjusted over time and as the round count increases. It means easy opening and closure of the gun and a tight feel to it too.

The rear stock is more conventional, showing grade 2.5 dark walnut with a very nice matte, oil-rubbed finish, which is much better for field use. Plus, it’s easy to touch up when scratched. It too has had the weight-saving treatment, with the cavity being increased in size without affecting the integrity, so you save 129-grams compared to a similar Beretta shotgun.

The stock has a limited cast and a perfect comb height for me, so instant eye-to-rib alignment is assured. It is also available for left-handers in the Vittoria version, with a specifically profiled design for smaller-stature shooters.

To lessen recoil, you have the ExtraLight recoil pad that is 30% lighter than a standard butt pad and its closed cell structure avoids liquid absorption. It grips well and during the tests, I found recoil was very mild.

As the name suggests, the Ultraleggero is indeed light to handle and it feels very well balanced with the 28” barrels fitted, with the balance point just on the action’s hinge pin. This Beretta is very fast to shoulder, aim and track game or clays as you wish. As stated, the action really does feel tight but requires little effort to open or close, with very powerful ejectors too.

Fitted with the ½ choke in the bottom barrel, we tested the Beretta at 30 yards on pattern boards.

First up was the Imperial Game (a typical game load) using a payload of 28-grams of No. 6 shot in a shorter, 65mm casing. This cartridge packs a lot of punch for the size but not at the shoulder. The Beretta’s felt recoil was like a normal 12-gauge, despite its lighter weight. We had a total of 236 pellets on the board, with 108 inner hits (good coverage) and 128 outer strikes within the 30”. Overall, a very usable cartridge for a variety of game or vermin.

Next was the hard-hitting Driven Grouse from Hull, with 30-grams of copper-plated lead pellets of No. 5.5 sizing. The pattern boards showed a typical, very well distributed and wider pattern than the Imperial Game. There were a total of 206 pellet strikes, with 81 in the inner 15” and 125 around the outer sectors. There were a few gaps here and there, but nothing any game would slip through.

Finally, a good pigeon load is the Special Pigeon. The 70mm cartridge holds 32- grams of No. 6 shot and managed 269 pellet strikes, with 119 inner hits (wow) and 150 outer strikes. There was a slightly higher bias to the pattern but it was dense and really well distributed.

I was a bit dubious about the polymer inserts in truth but the weight reduction is actually very welcome and achieved in a clever way. It does not affect perceptible recoil at all, yet gives the Beretta a great handling feel. In fact, the Ultraleggero is a very easy gun to shoot well and would make a nice walked-up gun or just a 12-gauge that you can carry all day.