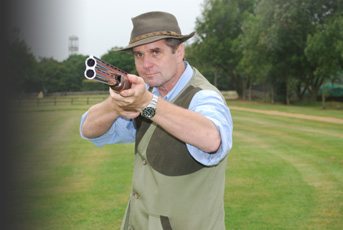 Bettinsoli are a well established Italian firm that make a wide range of sensibly priced guns (hence their order books are still full even in this difficult economic climate). Their good value wares are imported into the UK by RUAG Ammotec Ltd. of Liskeard in Cornwall, another respected outfit (RUAG also handle Perazzi and Rottweil guns, and RWS and Norma ammunition amongst much else).

Bettinsoli, meanwhile, are a family enterprise – Roberto Bettinsoli and his dad still live above the workshop. And, extraordinarily, they make 13,000 guns a year. Compare that with our own great makers who typically create less than 100 guns a year – albeit of outstanding quality - it’s a remarkable tribute to the efficiency of a small family firm staffed by dedicated, hard-working people (on all my trips to Italian and Spanish gunmakers, I have noted just how hard people work, and, at an extraordinary pace in the gun industry).

The Price is Right

First impressions of the test gun are definitely good, all the more considering it’s RRP of only £935 (£999 in 20 bore). It has 30” barrels (there is a 28” option) and looks attractive with a silver polished, gold inlaid action - the details of finish are excellent considering the price. Neat metal work, multichokes, good barrel blacking, well finished wood, and attractive embellishment. Bring the gun to the shoulder and one does not mistake it for a Purdey, but it is a perfectly acceptable shooting iron that does not weigh too much (around 7 ½ pounds all up) and is reasonably well balanced, though a little front heavy. There is a subtle taper to the 10-7mm rib. The pistol gripped stock - with slight palm swell - feels comfortable as well.

Is this as good a gun as a Beretta or Browning? It may not be quite as solid, but it is a lot less money than even the cheapest of the new Silver Pigeons (super guns by the way – and great value too) or 525s. Nevertheless some people do not have an unlimited budget, and this gun is aimed at them - metaphorically speaking - and definitely offers value. Thanks to the CNC machining revolution, it is a much better gun than a budget model of a generation ago, and with in-house laser engraving it’s a more attractive one too.

Let’s get the magnifying glass out and really see if we can fault it. The Bettinsoli’s barrels bear Italian proof marks for 3” (70mm) cartridges. It is steel shot proofed too. Forcing cones are of medium length and bores are 18.4mm in diameter. Something a little wider would be my preference – but this is the Italian norm. The barrels on the test gun are 30” long as noted and a little lighter than the average – a good thing in an all-rounder. They are equipped with a ventilated sighting rib which has a slight taper (10-7mm) as already mentioned, a conventional metal bead at the muzzles (never wrong), and vented side ribs too. The test gun is supplied with 50mm long interchangeable chokes and 5 are supplied.

Workmanship on the barrels was well up to standard, with good joints between the tubes and the monobloc. Overall, indeed, the barrels of this Bettinsoli, merit a ‘good’ for both their well polished external finish and their internal presentation too. The amazing thing is that anyone can actually make barrels this good for such a competitive price and still make a profit. You could only barely get a gun sleeved in the UK for the retail price that the Diamond line sells for (a pair of any sort of British barrels will set you back at least 5K these days and new artisan-made stocks are as expensive).

The action of the Diamond Line does not have a very low profile; it is built on the usual Gardonne arrangement which combines, you guessed it, split pins for hinging and a Browning style flat bolt mating with a bite underneath the bottom chamber mouth, but it does look attractive with pleasant, fairly wide spaced, scroll engraving and better than average gold inlays. I am not usually fond of gold adornment (and you can, by the way, get an ever better priced Bettinsoli model without it which we will be looking at soon). But, I have to say, that the golden game birds here look attractive with the woodcock on the left side of the action getting my aesthetic vote in particular. There is even a perforated top lever – which may be gilding the lily a bit, but is typically Italian, as is the silver finish to top lever, trigger guard and action furniture. There is a bit of bling here, but, many will like it.

The selector on the Bettinsoli’s top strap, which functioned positively and is a sensible size, is of the Browning pattern too. This is my favourite style because it is the most practical in the field. The trigger is recoil activated on the usual bob-weight system and the pulls were acceptable. I also liked the plain steel (non-adjustable) trigger and the shape of its blade. The gun is mechanically well proven and the aesthetics of the action – and especially the scroll engraving - are eye catching. I would love to see this gun produced with the same beautiful engraving without the inlays.

The wood on the Diamond Line had slight figure, but it was well finished with well cut laser chequering set out in neat panels and the stock itself was oil finished rather than laquered (remarkable for the price). My only pick is the curved border lines on the forend chequering – I prefer traditional straight ones. I cannot criticise the stock dimensions either, drop was 35mm at the front of the comb (1.37”) and 55mm to the rear (2.16). The grip is good as well, quite tightly radiused, but fills and secures the hand well. The comb had some taper and the butt is finished off with an 11mm black pad. The Bettinsoli offers bolt on pads of different thicknesses – 11, 17 and 25mm (the last to order). So, it can accommodate length requirements from just under 14 ½” to 15” without gunsmithing required - always useful. The gun actually comes fitted with the 11mm pad giving a 370mm / 14 1/2” pull with spare 17mm pad and screwdriver provided.

This is not a gun you are going to win a world championship with, but it shot and functioned well, and it would not disgrace you in any company. On the handling front, it has enough weight to control recoil but not so much as to make it sluggish. Recoil was just a little more noticeable than the average, and it might be worth considering opening the bores a bit. But, by any standard, this was an excellent gun for the money. I shot it on the skeet and sporting layouts at the Fennes Shooting School in Essex and did not miss much. All things considered, it is a gun that would be worth serious consideration by anyone looking for an all rounder that offers a bit of extra finish and which won’t break the bank. It may appeal to both those new to shooting and intermediate level shooters.