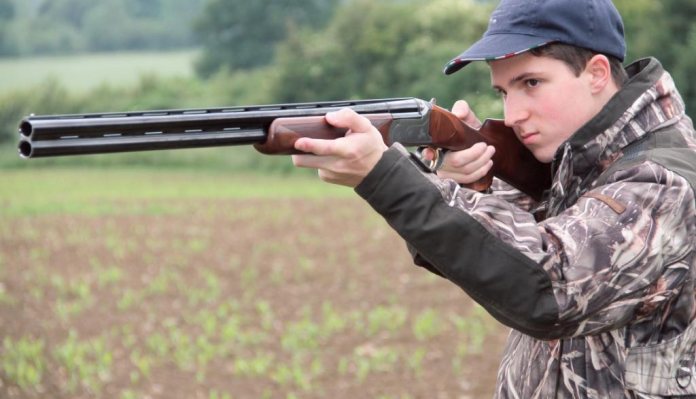 RUAG AMMOTEC UK import Bettinsoli shotguns from Italy and they have been part of the GB shooting scene for quite a few decades now. They have always been a go-to first gun that often becomes the only shotgun you actually need.

Bettinsoli shotguns have a good overall range, calibre styles and workmanship that appeals to all levels of potential shotgun buyers. I tested the 28g version of this shotgun and really liked it. This is the 12-gauge version and is your typical over and under shotgun that is available as this small calibre version or also as a Sporter in sliver or case-hardened finished action and even a 3.5-inch chambered version with camo cladding for wildfowl. All have a single trigger, manual safety catch and proofed for steel shot.

Although aimed at the game or vermin shooter this X model is equally capable for informal clays, but its nicely rounded full forend gives both an elegant look and ergonomic benefit. It is not skimpy like some Schnabel forend’s and so gives a really good hold and allows the hand to be positioned almost anywhere along its length and still give a good degree of control. This is also helped by some generous laser cut checkering panels that wraps around the sides and underside around the release lever for the forend itself.

Both the stock and forend are made from a quite nice quality of walnut. This model had a good degree of alternating colour and figuring with a nice semi rubbed oil finish to give a good looking

The butt stock has a length of pull of 14.25-inches which was a bit short for me but accommodates the `average` person no doubt. But it does not affect the handling or head position on the stock. I found it allowed a good straight down the rib view with no right or left bias. A reasonably low comb and slight cast to the right and a small palm swell to the pistol grip certainly contributes to this natural handling. Here is also an extra piece of checkering where the thumb lies on the stock, not really necessary but shows someone in the design team were thinking about all aspects of this shotgun.

The black recoil pad is 20mm thick and suitable profiled to allow a swift shouldering and then grip without the bulk of a bigger pad design.

This is the XTS1276MC model, X Trail Silver 12-gauge 76mm chambered and multi choked. It has that typical Bettinsoli silvered action finish in comparison to the earlier colour case hardened finish.

It has a smooth polished finish, not too bright with interspersed areas of engraving. The actual action is all steel with a pretty standard sized action or monobloc design.

The profiled action has some nice scalloped detail around the edges with machine cut engraving to all faces, it’s a combination of leaf, floral, and flighted game of pheasant and woodcock. In truth it’s a bit fuzzy in places especially the game animals as the cut lines seem to bleed together.

As for the actual mechanics the X Trail has a typical Bettinsoli twin screwed in stud pins that allow the barrels to swivel smoothly and open the barrels easily. The rear full-length cross bolt locks on closure to engage the barrels lumps and form a very sturdy union between barrels and action. There is nothing new about this type of action, but all parts are well made and fit very well for a smooth yet solid lock up for many thousands of firings.

The top lever has moulded in checkering to both sides and has floral engraving and landing duck to its top whilst the manual safety sits below this and is blacked not polished with a raised square dome that is just the right height to be easily used without looking bulbous.

Rearward is the safe position and right position to fire the bottom barrel first and left for the top.

Coil springs are used throughout and form a reliable and positive action and ejection system and you can hear the ejectors working in unison and see the cases fly out! The trigger is a single stage typical unit with which is quite large with a slim smooth polished trigger blade that is gold washed. I like it as there is enough space for a gloved hand inside the trigger guard and despite the shorter length of pull worked well for me.

Typically, Monobloc in construction with well machined lumps and precise cut-outs for the swivel studs and locking cross bar to engage. This all adds up to a really tight solid feel so plenty of life to be had in this shotgun. The lumps are big and sit very well in the action bottom and are also nicely jewelled which is a good touch on a gun in this price range, with jewelled ejector spurs those coil sprung operation is very positive with spent cases ejecting positively.

The bluing on these barrels is very good another plus point, it is very deep and evenly applied and looks smart to boot. The length is a generous and now popular 30-inch chambered for 3-inch cartridges and are also steel shot proofed. You have a generous 9mm rib with good even knurling to keep reflections to the minimum and the mid rib is vented to reduce weight and allow a degree of cooling between the barrels. There is no mid sight just a single silver bead at the muzzle end that I prefer, my son likes a mid rib sight.

The multi-chokes are flush fitting type with five supplied as standard and are two-inches (50mm) long and beautifully finished in bright chrome. The choke key is also large and easy to use and these Bettinsoli chokes combined with the well finished bores have always thrown good patterns.

I set up the pattern boards at 30-yards and used the 1/2 choke to see the pattern thrown from the three cartridges selected. Handling wise no surprise with a light and fluid mounting and swing. It’s not too expensive nature makes it ideal for real world shooting where a few scratches or dings won`t upset you not performance is more important. The firing pins struck the cartridges with a good degree of force for a positive ignition and the ejectors were very brisk, just what you want when out flighting for a quick reload.

First up were the Game Bore Imperial Game load with a 26-gram load of No 6 shot, they are always a good reliable performer and mild on the shoulder too. You had a lovely even spread of shot across the entire 30-inch board with a total of 188 strikes culminating in 80 inner and 108 outer hits. This load is actually good for anything, pigeon, game or vermin.

Eley Grand Prix HV next. These were the first shotgun cartridges I ever shot but as a teenager and they are still bringing home rabbits and pigeons today. This load of 32-grams of No 6 shot is pretty pokey and shows it with a healthy total of 261 pellets on the board.

I had a very good dense and even pattern distributed 149 outer to 112 inner strikes, I like this load.

Finally, the really rather good all rounder from Hull, the High Pheasant Extreme. This uses a whopping 36-gram load of No 4 shot and yes you do feel it at the shoulder although the Bettinsoli absorbs a lot of that kick in its good geometry. I had a total of 159 No 4 shot strikes with 57 inner hits and 102 outer strikes.

Despite the influx of Turkish guns, the Bettinsoli is still holding its own. Within this sub-£1000 price mark the Bettinsoli range represents good value for money and have a good reputation too. They are better made than some of their competitors and still worth a look at in this price range of shotguns. This X Trail had some nice wood and as you can see from the pattern boards shot some very good and well distributed shot patterns which at the end of the day is what it is all about.