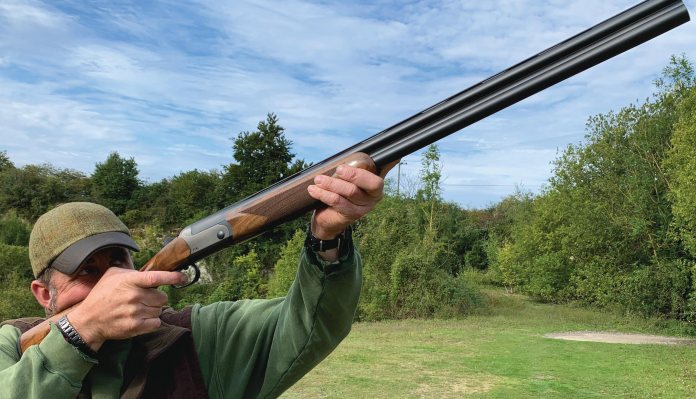 Blaser is a manufacturer that should need little introduction, they hail from Germany and have a distinguished reputation for making high quality firearms of various and innovative types. Such as their traditional K95, singleshot Kipplauf and more radical R93 and R8 straightpull rifles. They came later to sporting shotguns with the over & under F3, which took the smoothbore world by storm and became one of the top class competition guns. Later came the F16, which took from the former design in many ways, but offered perhaps a more general design.

On test is the basic F16 Sporter 12-bore. Three higher spec models are also available, these being the Intuition, Heritage and Grand Luxe. The gun was supplied with the 30” barrels, but 28” are also offered, both are multi-choke and come with a set of five with half and less being suitable for steel shot and chambered for 3” (76mm) cartridges as well. Which covers most shooters needs. Barrel balancing is possible by adding weight as needed, this works in conjunction with weight that can be added to the stock. The top rib is solid and tapers down from 9mm at the breech to 7.5mm at the muzzle and is finished with a red bead. The taper is meant to draw the eye more naturally down the centre of the rib and having shot the gun this is certainly the case.

The semi-round bodied action is designed with a low profile to give a low centre of gravity (COG). The advantages of this are a better balance is achieved, a reduction in felt recoil and when opening, the barrels have less downward travel, which facilitates faster ejection of fired cases and quicker reloading.

The F16 employs the Ejection Ball System (EBS). This cocks the ejectors when the gun is opened after firing and this mechanism certainly throws the fired cases several feet away convincingly and consistently. Conventional ejectors, by comparison, are cocked when the action is closed, but the trouble with this is that they are then stored in a cocked state which can cause their springs to weaken over time.

Blaser has definitely made a strong steel action that should last the test of time, everything about it feels solid and the wood to metal fit is excellent. It’s finished in a pleasing gun metal grey, with a simple red highlighted yet subtle F16 engraving on each side. The barrels, top lever and safety are all in a muted black that goes very well with the action colour. Safety is non-automatic and quite slender, only the rear half is raised and grooved which I feel is a mistake, as it is easier to put into the fire position than to take back to safe again. If a little more of it was raised and grooved this would not be the case. Shape aside, many shooters prefer a non-automatic system here, certainly for live game shooting.

This 30” test gun weighed in at 7.75 lbs, but of course with different barrel lengths, and models along with the weighting system that can be added for balance, overall weight will vary depending on user preferences. The trigger is a single selective unit for barrel choice and adjustable, they are normally set at 3lb 10oz which is what the test gun was, this was crisp, and I would not want to change it if I owned one.

Wood is Grade 4 but can be upgraded if desired, with the other three model options offering further levels of choice options, sophistication, and decoration. The furniture on this example looked particularly good, this and the muted finish of the metal all complimented each other nicely. The forend is neither too slim or bulky and should fit nearly all hand sizes well, chequering shows a wellfinished diamond cut. The pistol grip has a right-hand palm swell on the right side, giving a more comfortable and positive feeling hand position. F16s are available with adjustable combs and in left-hand versions too. Blaser’s website also shows a build configurator, so you can pick what options you want prior to buying the actual gun.

Typically, a wide variety of cartridge in varying loads and shot sizes were used. Without fail all ejected reliably, sometimes a little too well when I was in a pigeon hide near a bramble bush. Loads from 24 to 32-grams were, as you would expect, all extremely comfortable. The heavier 34 and 36-grams obviously did produce increased felt recoil and whilst it was manageable for a modest quantity of shots I would not want to be using them all day! But judging by the way this gun performed with 28 gram #4s and 5s, I cannot think why anyone in their right mind would want to use the heavier rounds in large quantities all day. I found this gun to shoot Hull Imperial 28-gram #4s and Lyvale Power Pigeon 29 gram #6s best of all, they patterned well and shot to point of aim, both performed well on days at rooks and pigeons, respectively.

Although on the whole, I enjoy all gun testing, some models; irrespective of brand and price, just seem to have the edge over others. In that they handle and point more naturally and just feel right, for me and the Blaser F16 Sporter definitely fits in this bracket. My only small niggle is the shape the safety catch. Price-wise, you will be parting with in excess of £3000, which will put it out of some people’s budgets when looking for a quality shotgun. However, the excellent and ergonomic build plus the ability to tailor the gun to your requirements makes the F16 worth serious consideration, even then.

Personally, I would like to see it offered in other calibres, particularly 20- bore and I think Blaser are selling themselves short by not having at least this other option available. If I were looking for an over and under 12-bore and had the money would I get one? Well, the answer to that is a definite yes! But, if they had a 20 available that handled as well as the 12 does then I would be changing things around to get one.