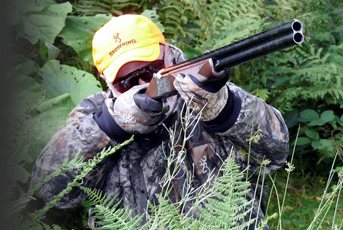 Singling out a high goose or a fast flying duck cleanly from the sky can take some doing. Equally, given the fact that you can only use non-toxic loads and that they rather need to be of the Magnum variety, you may find your average game gun ain’t up to it. Not so with one of Browning’s Special Waterfowl 425’s, an old fashioned shotgun with serious handling capacities.

With the Special Waterfowl your money buys everything you need from the simple plastic travelling case to a full set of flush-fit, Invector Plus multi-chokes and key. These in turn fit into a pair of 30” over & under chopper lump, back-bored, chrome- lined, steel proofed, 3½” chambered barrels. Designed to withstand the heaviest 12 – bore loads, these rich blacked tubes are joined together with a solid mid rib and a low, vented 6mm top rib and small bead. Where they differ compared to the now more usual monobloc system is that the barrel, chamber and lumps are manufactured from solid as one unit; so no joints or potential weaknesses.

The boxlock action is the basic satin finish item. However it has been adorned with skeins of geese and flighting duck with the nomenclature ‘Special Waterfowl’ between the two famous trapdoors along with a gold ‘Buckmark’ inlayed into the trigger guard. The gold plating continues on the smooth non adjustable trigger blade whilst the top lever and manual safety catch/barrel selector are two of the plainest in the range, indicating this gun’s intended harsh environment existence.

Both the London-style forend and rounded, semi pistol grip stock are basic by definition, although selection of the straight grain timber adds to the furniture’s longevity and strength. Finished with Browning’s semi-matte ‘Dura Touch’ coating and a soft rubber recoil pad, what the wood lacks in beauty it more than makes up for in resilience to whatever you, the environment or the weather may throw at it, whilst the close cut chequering comes into its own when this 425 is shot wearing neoprene gloves.

From me it’s the Special Waterfowl’s dimensions that make it such a superb gun to shoot. With a drop at comb and heel of 1½” and 2” and a length of pull measuring a precise 14¾” this Browning is an exact fit. Add to this a crisp 5lbs 1oz trigger and you have a 12-bore that feels and mounts exactly as it should do.

Something you also have to realise is that when used for purpose, there’s every chance you’ll be decked out in your camo suit and gloves. Sensibly the trigger guard is more than generous enough to allow swaddled fingers easy access, a nice touch when compared to other duck hunter layouts. It’s the dimensions where this Browning really wins out. If this gun fits me like it does, then it should be ideal for the majority of others - especially when compared to the slightly short stock measurements exhibited by semis and pumps.

It just so happened that I was able to try this 425 on a variety of targets inclusive of the ones this gun’s actually designed for. Choked up ½ and ¼ the first challenge was 50 of Rishton CS’s sporting targets, the gun instantly taking on the familiar attributes of a flat shooting Trap gun. Yes, a more than respectable score resulted, with only the fast crossers needing a degree of physical effort. What immediately made its presence felt or rather didn’t was the singular lack of recoil even from my usual 28g Express Supremes. So much so that a gradual increase through various 30-gram loads up to rapid discharge of a pair of 3½” 50g Winchester buffered load magnums did little if anything to upset the 425 or the shooter’s equilibrium.

Following up the clays with an evening’s inland duck, goose and crow shooting only emphasised the 425’s ability to sustain the use of heavy loads. No doubt the Special Waterfowl is a genuine companion when squatting in a ditch. Retaining the same restrictions, the steel and non-toxic proofed, back-bored barrels swung easily onto their target, the game rib and small bead accentuating why this style has stood the test of time. The other beauty of the O/U format is that you know where your empty shell cases are, in the gun or your pocket. In the 425 you have 8lbs 4oz of 12-bore that hefts well, swings smoothly and handles just as you’d expect, allowing you to get on with the job.

More Than Just a Duck Gun

If you view this 425 as just a wildfowling piece you’re seriously missing out on what the gun can actually do. Fair enough, if you opt for the £1,580 full camo version then yes, it’s more or less a pure duck hunter. But if you save a few pounds and buy the more conventional finish as tested for £1,500 you’ll find you’ve bought a surprisingly capable all rounder. OK, at over 8lbs it’s no lightweight but the slight weight – forward balance and ability to eliminate all but the most insignificant recoil makes this Browning a true pleasure to shoot.

If it’s a 12-bore that’ll stand up to anything and at a price nearly everyone can afford that you are interested in, then the 425 Special Waterfowl is worth serious consideration. Similarly, if you want a dedicated goose gun and don’t want to go down the semi-auto route, there’s hardly anything else out there that combines the affordability, adaptability and sheer quality of this 425.

We Reckon!
• One of the strongest 12-bores you’ll ever own
• This Browning will last you a lifetime
• A gun that thrives on hard work