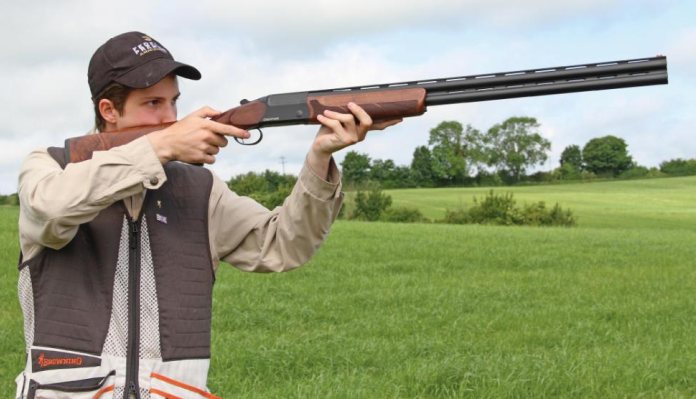 Derya is another Turkish shotgun maker that is making a name for itself here in the UK. They are especially noted for their semiautomatic designs, primarily tactical style for practical shotgun shooting. However, today, RUAG Ammotec UK is importing a broader spectrum of their product line to incorporate sporting and clay usage.

The new Derya Meriva, 12-gauge, over and under shotgun is steelproofed and comes with multichokes, 30” barrels and some lovely walnut furniture, so I have to say at £650, what’s not to like?

This new shotgun would not only suit a beginner on a budget but also a seasoned shooter who wants a cheaper gun for general use, so their prized shotgun stays in the cupboard and doesn’t get scratched! Having said that, the overall finish in satin black and the walnut woodwork gives the Meriva a very elegant and subtle look that I like.

When first looking at the gun, what instantly grabs you is the nice walnut stock with a simplistic design. It makes a big difference to the overall feel and for the price, puts other more mainstream shotguns to shame. This should come as no surprise as it is a Turkish gun and even the value for money guns seem to wear better than your average walnut stocks.

The shotgun’s furniture shows a semi-sheen oil finish, which is both practical and long-lasting for field usage, plus it is easily reapplied or enhanced. We actually found ourselves testing the gun out in torrential downpours as well as searing heat and the Meriva just shrugged it all off.

The actual walnut is a lovely deep, dark colour with some very nice figuring to the buttstock section and similar corresponding figuring to the forend too, plus they both match each other nicely. With an all-black gun, the contrast is very pleasing and it looks smart and elegant, being a rifleman, I much prefer this look to a brightly polished action anyway.

The comb is a good height and complements the rib height, so a natural hold and sightline are observed. The small amount of right-hand cast allows a pure hold and again a view right down the centre of the rib. The butt sports a shallow, rubber recoil pad and the top section is black plastic, so you can mount the Meriva quickly, without it snagging on clothing.

The length of pull (LOP) is a sensible 14.75”, which is a good allround length and feels just right. Some cheaper guns seem to be supplied with a short LOP and I guess aimed at younger shots, so here the Meriva wins.

The forend is nicely profiled both visually and from a comfortable hold perspective. It holds the inset, pushbutton forend release catch, which is tight to operate like all new guns. At least after a few boxes of ammunition, the forend won’t rattle around.

Extra grip comes in the form of three chequered panels and these are nicely executed and do enhance your hold, however, there is no chequering to the underside. It’s worth noting that there is a long recessed top finger groove that keeps the gun firmly planted in the aim.

I particularly like the barrels as they are very well finished, both inside and out, with the muzzles well-struck off making for a good look. The monobloc construction shows jewelled sides to the lumps and a really nice satin black overall finish to the rest of the barrels.

This is ideal for hunting due to it being non-glare, plus it just looks great contrasted with the oil-finished stock.

As previously mentioned, the barrels measure 30”, which is the go-to length these days. Being a 3” chambered gun, all shotgun shells up to this size can be fired safely and the usual Fleur-de-lys proof mark indicates the use of highperformance steel shot is not a problem either. The gun comes with five, 2” long, flush fit chokes and a suitable key supplied in a plastic case.

The rib is 10mm wide, with a nicely serrated top to stop reflective light on a bright day, plus there is a single dayglo red element at the end, which is all you need to steer your aim and swing. Below, there are eleven evenly spaced vents, with the mid-rib section also being ventilated to save weight and aid in heat dispersal.

The action has the same finish as the barrels and again looks great. There is no unnecessary engraving, just the Derya name etched in light bronze. This finish makes the Meriva look so much better than other guns in this price range, that try to look expensive with horrible shallow engraving.

The barrels fit snugly on two captive pivot pins set into the action walls and the sliding bottom lock really does engage the barrel very tightly. In fact, opening the Derya was a real effort, to begin with, but everything evened out after a few boxes of 12-gauge. Ejection is very precise and strong too, literally slinging the cases rearward at velocity. However, some high-necked cases did stick occasionally.

The opening top lever is plain black and shows some chunky chequering for grip. The safety is manual, so you can choose when to apply it, and this type is my preference. I find that automatic ones always catch me out because I forget to disengage them! Inset into the oval sliding safety catch, much like a Beretta, is the barrel selector. Simply slide it left to right to choose top or bottom barrels.

The chokes that I decided to fit were cylinder and ¼, so nice and open, plus a good choice these days for the new steel loads, which will soon be the norm!

Eley Grand Prix Traditional Steel has a 30-gram load of #4 shot, which is designed for classic 2 ½” chambers, so no problem in the Meriva. With the ¼ choke fitted, I shot at a pattern board 30 yards away and there was a total of 166 pellets within 30”. There were 96 outer strikes and 70 inner ones, so quite a tight pattern, which is what I expected from the steel shot.

The new Fiocchi steel cartridges come with a nice high nickel head, but in use, some would stick in the chamber on ejection. This was a shame, but the patterns were nice and even, although a bit high. There was a total of 187 pellet strikes, with 65 inner and 122 outer hits from the 32-gram #4 shot load.

A more normal offering of Eley Pigeon Select with its 30-gram #6 shot, produced a total of 177 hits, with a really nice even pattern. There were 52 inner strikes and 125 outer hits.

Seeing as a beginner might choose this gun as a good starter, I also used some Gamebore Blue Diamond. Here, these mild loads, with #7 shot and 24- gram payload, are excellent beginners cartridges and always pattern superbly. They also kick far less and in the Meriva were very easy to control, even with a second quick shot.

In use, I found that this shotgun balances very well just in front of the action and seems, at least for me, to guide itself into the aim, as my eye was looking flat, right down that barrel. It’s worth noting that all the steel loads tested did shoot with an upward bias to the patterns, which is normal and flight times are different too. Apart from the high head cases sticking in the chambers and the ‘new gun’ tightness, the Meriva really shot well. A 28-gauge one would be nice!

Firstly, I like the overall look of the Derya, a bit understated but in a good way, with its satin black all over metalwork and non-engraved action sides. The walnut is very nice as is the handling, plus the patterns shot with most loads were also good. The whole gun handled and mounted effortlessly, making it a great choice to take out for a spot of pigeon shooting, clays or general vermin work.