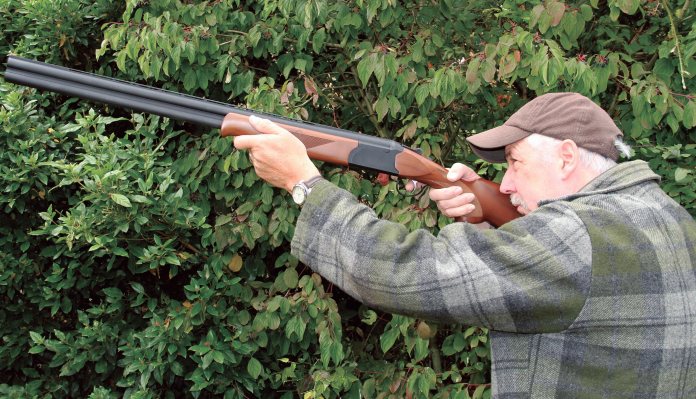 I have shot Hatsan semi-automatic Escort models before for goose shooting in Scotland but never an Over and Under model. Hatsan were one of the first big producers of shotguns emanating from Turkey to reach these shores, and are imported by Edgar Brothers Ltd. They have a very good selection of differing models and styles to suit almost any type of shotgun shooting or quarry species undertaken.

Value for money and workmanlike business is the name of the game with Hatsan and this Optima 12g O/U model with multi choke 3-inch chamberings was one such gun.

I always tend to start with the stock, as it’s the first part of a shotgun that strikes you the most. Its contribution both to handling and aesthetics can be where a shotgun performs or not, as well as being loved by its owner. The Optima reminds a little of the older Baikal O/U shotguns, built as a workmanlike tool, and performs well rather than winning any awards for beauty. That’s not meant as a downer but actually a compliment – there are times when you just want a shotgun, in this case the Optima 12g is to be used just for shooting not lording amongst your friends as another purchase.

Aimed at the real hunter who will probably slip and slide on the muddy fields or scramble through hedgerows, the Optima is ideally suited as the stock is plain but with a very thick matt lacquered finish. Usually I don`t like this type of hard exterior finish but it certainly encases the Optima`s stock against the elements. It’s very thick and actually makes what could be quite nice walnut below look plainer than it is. This is walnut, a grade one, but it’s difficult to tell! However, no matter the weather, the Optima’s stock is protected.

It has a length of pull of 14.25-inches with a slim black solid rubber recoil pad, which is fine and allows the Optima to be shouldered quickly. You have a low drop at the comb and a small amount of right-hand cast to the stock and no palm swells and for me that comes up nicely and my eye leads down the rib naturally. Machine cut checkering adorns the butt section and forend in small panels and is more decorative than effective. But the forend does have a large tulip type tip that keeps the supporting hand in position.

No surprises, the typical Monobloc construction with a lower cut to the lumps so a traversing bottom sliding bar firmly locks the barrels to the action. Pivoted around the side action hinge pins the action is stiff to start with but locks up very neatly. There is some jewelled finish to the monobloc side walls and the ejectors were very pokey and ejected well.

The overall finish is matt black, including the top lever and trigger guard with only the ‘Made in Turkey’ lettering to the base. It’s a practical finish for hunting to reduce reflections and is also applied to the barrels as well.

The trigger is a single silver polished blade, quite curved and is the direct type, not inertia on cocking, so when the trigger is pulled the striker falls per pull, again, I prefer this to inertia type actions. The safety is on the tang as usual and is non-automatic, and in the rear position slots left and right to select top or bottom barrel. There are no markings at all to indicate which, but back is safety on, forward safety off. To the right side means the bottom barrel shoots first and to the left means the top barrel is first to fire.

Matt black finished, as the action, as stated before, the rib has a slender game type width of 6mm, which I prefer. The sighting is via a single red day glo element at the muzzles which is all you need. There is no second rib between the barrels, it is solid, and the top rib is vented with 11 evenly spaced and sized holes. The muzzles are quite well struck off with the flush fit multi choke system just sitting below the muzzle lip.

You are supplied with five multi chokes, they are 2-inches long and made of stainless steel and clearly notched to show the choke size around the rim. They are supplied in a plastic box along with a sturdy choke key.

The chambering is for 3-inch (76mm) cartridges and has the all-important proof marks for steel shot i.e. CIP Fleur De lys symbol. Thus, making it a good all-round general-purpose gun for all types of ammunition offerings.

I ran the usual fare of pigeon loads through the gun, as these are more likely the type of cartridges this gun would see, and also a steel load to test the patterns here.

Shotguns are odd things you don`t have to have the most expensive shotgun made to make it shoot well, as if it does not fit you and your handling and eye alignment down the barrel is off then it does not matter how much money you have spent, you won`t hit anything.

Despite its austere appearance, it handled remarkably well and, for me at least, the good cheek weld to the stock when mounted meant my shooting eye was right down the rib.

I fitted the ½ choke for the pattern board test, although it came fitted with cyl and ¼ choke, and as such shot some very nice open patterns for closeup woodland bunnies amongst the brambles. Here I really like the subsonic load from Hull, the VLR despite not having a sound moderator fitted they are very good at short range work.

The best pigeon load was the Clear Pigeon load from Gamebore. This is a 70mm case of clear plastic and is available in plastic or fibre wading with a choice of 30- or 32-gram loading but only No 6 shot size. I like the 32-gram No 6 shot loadings with fibre wads as they are very consistent and produce good patterning loads.

From the Optima I had a total 273 No 6 pellets on the board with 99 hits in the inner 15-inches and the remaining 174 pellets to the outer sectors. This had a good density of shot with an even spread and considering its 32-gram loading the recoil for not too bad.

Imperial game was next and is mild to shoot but always delivers great patterns. True today, as the Hatsan shot the 65mm red cased load with fibre wad and, holding a charge of 28-grams, No 6 shot very well indeed. A total of 217 pellet strikes at 30-yards with an even spread of 77 inner strikes and the remaining 140 No 6 shot pellets around the 30-inch circumference. I tend to use this load and my son Jake for all sorts of game, rabbits, squirrels etc., it’s a pretty universal round really.

The steel load I really like and which always seems to pattern well is the Hull Steel Game Extra, the Steel game is good too. No more than ½ a choke size for steel shot due to their harder surface this Optima is steel proofed high-pressure steel 1320-bar. I had the 70mm case with 32-grams of FE3 shot size so nice and big for wildfowl and as such at 30-yards the total pellet hits were 149 pellets with 81 outer strikes and 68 inner hits. A little hefty on the shoulder this one but great downrange performance makes the recoil worth it.

The Optima is just a ‘go shoot it’ type of gun, no frills or spills, just load-up and start shooting. At this price level there is nothing to complain about, even the tick matt lacquer stock is practical and although there are no markings for safe or barrels selector it will not hinder the Optima’s use.