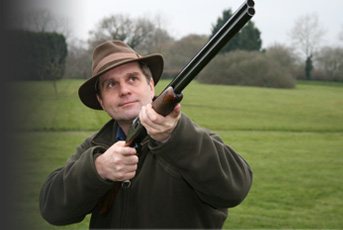 Harris Holland, founder of Holland and Holland was a wholesale tobacconist in the early years of Queen Victoria reign. He was also a very keen live pigeon shooter – so keen that it appears he started to get guns made to his own specification which then sold on under the name H.Holland but without an address engraved upon them. In 1867 he brought his nephew, Henry, into the firm and the now famous company evolved into Holland & Holland; now, 140 years later, they are still making great guns.

I have the greatest respect for this fine old firm. It still maintains a proper gun-making factory in London. Not only are artisan methods and traditional skills maintained there, but there is a constant effort to use new-technology to improve the company’s guns. H&H also run one of the best gun-shops in the world with branches not only in the West End, but also in New York and Moscow. And, they maintain, one of the finest shooting grounds in the country at Ducks Hill near Ryeslip (under the very capable management of Steve Denny). All these establishments are centres of excellence and the sport of shooting would be much poorer without them.

Holland & Holland today make something around 80 guns a year – not many, but every one would delight any keen shooter. They still make double and bolt action rifles, but our primary interest here is shotguns. The Royal over and under and Royal side by side models are at the top of the range. The Royal OU will set you back a cool £66,700 plus VAT, while the side by side in 12, 16 or 20 bore are something in the region of £55,250 excluding the VAT. They are both wonderful guns. If I had that sort of money to spend, moreover, I would not hesitate in adding both to my collection (a 30” 20 bore OU and a 30” 12 bore side by side with single trigger). In my opinion they are the best of their respective types available today. Perfection must have a price.

H&H also make a less expensive, but extremely strong, Round Action model side by side based on a back-action design (as commonly used in double rifles and also seen in the old Dominion model side by side). This sells for something in the region of £40,500 plus VAT (and there is a Paradox version as well). The subject of our test, however, is the Sporting model over and under. This sells for a very similar amount, depending on specification. It is available in 12, 20 bore (as tested) or 28 and certainly qualifies as a most interesting piece of kit. Introduced 20 years ago, it’s an upmarket side-plated gun with a detachable trigger lock not unlike a Perazzi. The styling is English however, and the craftsmanship is impeccable.

This gun has evolved somewhat since it first came out. I remember well when they were launched. It was in the days when CNC and Computer Aided Design was not the norm in the British gun trade. The Sporting model, which is predominantly machine made but hand fitted and finished to the highest London standards, caused quite a stir. I remember thinking then, that H&H were really trying hard to bring British gunmaking into a new age. I am of the same opinion now; no firm has done more to develop British gunmaking in the late 20th and early 21st centuries.

But, as ever, I am veering off the point. First impressions of the test gun are very positive. It looks distinct with a bolstered action. Standards of fit and finish are as high as you will find. The wood is good, the barrels are well struck up (always a positive with Holland guns) and deeply blacked. The action looks smart with colour case hardening and scroll engraving, although my preference would be for less exaggerated bolsters and a little more scroll on the sideplates (what is there is excellent). Bringing the gun up to face and shoulder, one has the impression that it feels familiar – not unlike a more pedestrian mass-made over under, but much more refined. There is for example, less weight forward in the barrels, and the grip, comb and forend shapes are very good.

The 28” barrels of the test gun bear London proof marks for 2 ¾” (70mm) shells. They are not monobloc but demi-lump (the over and under equivalent of chopper-lump construction). Bores are quite tight at 15.6mm (.615”), forcing cones are medium length, and a subtle taper rib with traditional metal bead has been fitted. I tried to fault the barrels and couldn’t. They are as good as any I have tested.

The action of the Sporting model is attractive and fitted with side plates as noted. These put a little more weight between the hands and provide a greater surface for engraving should it required. A fashion for side-plates seems to have developed in recent years, I have nothing against them at all - I don’t really care that much about the way a gun looks, but I do feel many side plated guns have an improved balance (the EELL 20 and 28 bores would be a good example of this).

The test Holland has split hinge pins in the manner of a Beretta (or Woodward). The action locks up much like a Boss. Workmanship is first class as it should be at this price. To remove the lock mechanism one activates a lever cleverly hidden in the back of the trigger guard. It then pops into the hand with minimal effort.  Leaf springs power the works. Notably, the H&H mechanism allows for a barrel selector to be incorporated with a removable lock design. The selector for this is combined with the safety on the top strap (no mean technical achievement in a detachable lock gun).

The stock of the test gun is of very traditional form. The grip is of open radius. The stock length is 14 3/4”, there is some cast at heel (1/8” at heel and toe and 1/16” at face), and the drop dimensions are 1 3/8 and 2 1/8”. All this is immaterial, though, as these guns are custom built, you may have any style of stock you want and any measurements. The list of no cost options is extensive. Grips can be straight, half or full pistol. You can have a palm swell if it floats your boat (it sinks mine). You can even have a Prince of Wales grip as on the test gun. You can also upgrade the wood.

It does not end there. Barrels may be specified between 25” - 32”. You can have any rib you want. You can specify a finished weight (within reason), you can have fixed chokes (as tested) or Briley multi-chokes and the action may be brush polished or
colour case hardened. Whatever you fancy – such are the joys of wealth.

How Does It Shoot?

I took the gun out with Chris Bird, Chief Instructor at Holland and Holland who is always an interesting knowledgeable companion on a gun test.

We both liked the gun. I usually like Holland 20 bores, this one felt refined in use – perceived recoil was low, handling qualities were excellent. The barrel weight was just right, not heavy - as many mass produced guns are - and not too light - as some bespoke guns can be.

To sum up, the Holland Holland Sporting 20 bore is the best of British, combining old and new. It is a modern gun in that the design is relatively recent and there is a significant amount of CNC used in its manufacture, but it is also a very traditional in the way it is finished.  If you had the money, you would want one, not just because it is a clever, innovative and efficient, but because you could have it built just as you desire. My wish list would include 32” barrels and a semi-pistol grip…

My thanks to the staff of the Holland and Holland Shooting Grounds and to Pat Murphy.