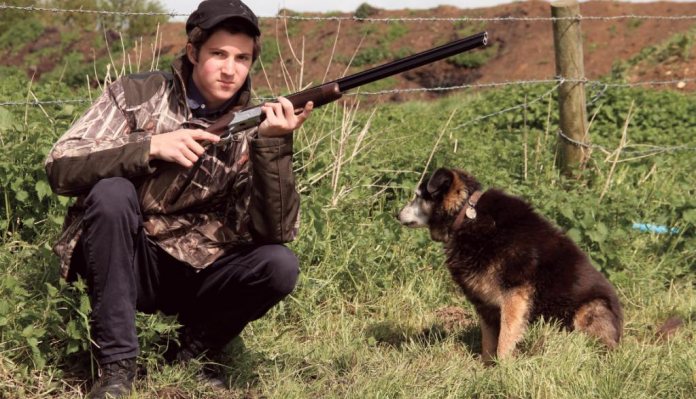 With the plethora of guns emanating from Turkey, airguns. rifles and shotguns, it is sometimes hard to assess good from bad, as many seem too good to be true.

Huglu definitely fall on the good side of the fence, producing well-made guns at reasonable prices. Their smaller calibre guns are all proportioned to the calibre, and as such, form a really nice compact and fast handling shotgun. This is ideal not only for the seasoned shot wanting to sharpen up their game but also as a costeffective alternative for younger or smaller framed shooters.

The 103D model is a lovely little 410 model, with an over and under configuration with a slim line action, nonejector and 28-inch barrels with fixed chokes; you have a walnut stock and plastic carry case all for £780!

Unusually, the stock on this model is a bit plain looking for a Turkish gun, where walnut is usually far beyond par of its rivals. However, its slim design and non-biased geometry makes it very easy to shoot, regardless of your size or orientation to shooting. There is an overall medium brown colour with a small amount of figuring and the whole, including the forend, is protected with a matt lacquer. I dare say that if this is removed and some oil applied the grain will come out. Regardless, it’s a tough, weatherproof finish that is fine for the intended use out in the field.

There is a low straight comb for a good cheek weld to the stock and a small amount of right cast, but in both shoulders, it shoots fine, with good eye alignment down the rib for Jake.

I really like the pistol grip, as it is long and has an angled rake, which not only looks good but also allows a relaxed but firm grip to the stock. There is no palm swell and it does not need it either, but the chequering of flat diamond form is a bit to shallow to be effective but is better on the forend. This is 9.25-inches long, with a bull nose tip and almost wrap around chequering; again, allowing a confident hold in all weathers.

The barrels are well struck off at the muzzles and have a fixed choke configuration. Top barrel is full and bottom barrel is ½ or modified. These chokes seem reasonably long and the bores not overly tight with a standard length forcing cone in front of the chambers. Being 28-inches long, they are a typical size, although a set of 30-inchers for clay comps is available if you like. I like openchoked, shorter 26- or 24-inch tubes for close cover work.

The finish is very good and has a deep polished blue, contrasting the silvered action well. You have a solid mid rib with a ventilated top rib that has 11 vents along its length for a bit of cooling effect. The rib is 8mm wide and has a single white sighting bead up at the muzzle, which is all you need, as it naturally points where the eye looks for us both.

This model is a non-ejector, with a single cross bar forcing the fired cases out of the chambers enough so that you can pick them out. However, you do have the addition of a jewelled finish monobloc that is evident when the Huglu is opened. They are stamped ‘Made in Turkey’ and ‘10.3 CIP S’ proofed’ so good up to 3-inch loads and steel if needed and the hard-chromed inner surfaces ensure the barrels will last.

Small, trim and compact best describes the Huglu 103D, with a slim line of 55mm height and 35mm width. You have a bright polished, almost nickelled, finish to the whole action, with captive pins to articulate barrels embedded into the front of the action walls. For decoration, there is interspersed engraving of scrolls, petals and Huglu’s trademark top of lever in gilt. Barrel locks or lumps lock through the action base and are blued so contrasts well with the silvered action face background. The top lever has no chequering and is smooth and also quite small but functioned fine.

You have a non-auto safety, which I like; you choose when to apply it, instead of being caught out just at the inopportune moment. The safety is the typical lozenge shape, with the barrel selector set into it, left is for top barrel i.e. full choke and one dot showing and right is for the bottom barrel and therefore ½ choke with two dots showing. The action or hammers are also mechanical; in other words, each pull of the trigger activates a sear and does not rely on inertia to set the hammers, being a smaller 410-gauge.

For the 410-gauge tests, I set up the 30-inch pattern boards at 25-yards and because most people shoot 410s on full choke, I chose the top barrel for these tests. I had four loads to test and all performed very well.

I really have grown to like this load, as it offers very good performance, although the No. 6 shot pellet size restricts the number of pellets and sometimes a pattern can be a bit sparse. This was a 19-gram load and I had a total of 95 pellets on the board, with 58 in the outer sectors and 37 in the inner 15-inches. Well distributed but a few holes.

These may be expensive coming from the USA but they are one of the best 410 cartridges out there. You have a 11/16th shot weight charge of No. 6 pellets but this time the Huglu shot a total of 103 pellets on target with 34 well spread inner strikes and 69 outer hits and very few holes. A very good all rounder this load in the Huglu.

This is a load specifically aimed at the clay shooter who likes the challenge of small bore clay shooting and I like them for ferals and rats. That’s because you have a large amount of shot.

For the payload size, here it was 14-grams but with No. 9 shot that makes a difference. At 25-yards, I had a total of 174 pellets strikes in 30-inches, of which 123 pellets evenly spread around the margins and a dense 51 pellets with the inner 15-inches. A very good load and actually quite hot too, i.e. fast.

Hull High Pheasant is a cartridge from the Extreme cartridge range that is designed for topperformance. Like the Fiocchi Magnum, it has a 19-gram load of No. 6 shot but I had a better overall pellet distribution. With a total 114 pellet strikes of which 82 were really symmetrical around the pattern board and a nice 32 pellet hits to the centre. This load would be a very good all-round hunting load in this Huglu, as it shot really well indeed and shows well-priced guns can also shoot.

What is also noticeable about the Huglu is that its light weight is well balanced with the 28-inch barrels and that long, raked grip does produce quick and direct swing, as you need it.

I certainly have a soft spot for the wee 410-gauge, it suits my style of shooting, and far from being a novice’s round, it makes for challenging and rewarding hunting trips. The Huglu 103D is the ideal shotgun in size, reliability and price to suit that need. Some ejectors would be nice, but would make it more expensive and not really needed, but best of all were those great patterns. That’s the point really; like a rifle, if it isn’t accurate, is not worth any money, in my view, this Huglu exceeds its price tag in performance.