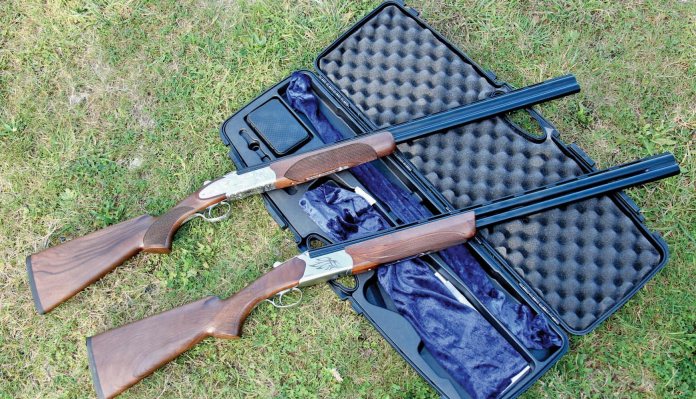 The flow of shotguns from Turkey seems to be turning into a torrent nowadays, which can only be good news for the British shooter, giving a vast choice of affordable shotguns to suit all tastes and budgets. The Huglu brand is brought into the UK by Range Right, a glance at their website will show you there is plenty on offer and I am sure the available selection will only increase as time goes on.

I was sent two guns to look at, the Ventus 12 bore and 103FE Silver 20 bore. Both have several features that are the same, which I will go through first and then look at their individual aspects. They have 28” barrels and are multi chokes coming with the standard set of five, the chokes are suitable for steel shot up to and including ¾, which is a change from the more commonly found situation of steel only up to ½ choke.

The ribs are wide, which is a feature I prefer, with a bright yellow Hi Viz type bead on the 12 bore, as is commonly found on guns aimed at the clay shooter and a white bead on the 20 bore, as one would expect of a game and sporting shotgun. The safety catches are manual and moved easily enough to and from the SAFE and FIRE positions, whilst still requiring a positive operation to do so. Barrel selection is accomplished by moving a separate but integral switch located on top of the safety from left to right. Again, this moved easily enough not to distract the shooter but not to the point one could get into a muddle or be left with the switch in limbo and neither barrel firing.

Stock length is a standard factory 14 ½”, which any competent gunsmith could extend if desired. The chequering on the forend and pistol grip is of the common diamond cut. The wood (walnut, what else) on both is functional and what one would expect on Turkish guns within their price bracket. However, also very similar to the quality of some of the substantially more expensive guns offered by some other shotgun manufacturers.

The 12 bore weighed in at around 6 ½lbs and would fall into the light weight type of shotgun class, the engraving is very simple and not at all overstated, looking like the wings of a bird, and this theme is followed with the chequering, which is outlined in a similar wing-type style. The forend is slanted and although this does look a little different from convention felt comfortable when handling. The 20-bore weighed in at 7lbs but did not feel clumsy for it, there is a wildfowl scene on the side plate, highlighted in yellow metal, that although not to my taste will be quite desirable by some would be purchasers.

Like the 12 bore, the 20 feels very comfortable and the forend, whilst not being too small for me, would not be too large for a youngster to achieve a positive grip. To give them a proper test, as we had no clay shoots coming up, I had a few hours’ pigeon shooting over decoys in a 15 to 20 mile an hour wind, which made things interesting and challenging. After getting set up, the most important thing was to keep both guns separate with their appropriate cartridges as mixing 12 and 20 can be catastrophic, both were taken to the hide in the hard plastic cases they are supplied in and separated with their allocated cartridge bag, the guns were only put together one at a time when in use.

To be honest, I was pleasantly surprised at how well they both handled, with a strong wind the pigeon were tricky to say the least and the slightest flick of the wing when coming into the decoys had them catching the wind and attempting to disappear at a rate of knots. To start with, I used the 12 bore, mainly because I needed some real birds to put on the flapper and floaters, and I have to say it handled and shot very well. My first two shots put two birds on the floor that I was very happy to get and enabled me to get the floaters deployed.

After around 50-shots, I was quite impressed at how well I was getting on with the 12 and decided to swap over to the 20 bore. Although the side plate on the twenty may be seen as a bit blingy by some, me included to my shame, it really was a delight to use and as with the 12 just kept doing the job in hand very well, putting pigeons on the floor and protecting an oilseed rape crop. I fired around 40-shots through the 20 before the supply of pigeons dried up and enjoyed every one of them, even the ones that did not connect.

In all honesty, I was a little sceptical as to how well these two shotguns would perform when I opened the box and first saw them, but they handled very well. And even with just a slip-on stock extension to bring their length of pull up to what fits me, they worked as well for me as my own shotguns that I have had for many years and cost considerably more.

Of the two my preference is for the 12 bore, not because it is a larger calibre, as I am a huge fan of the more diminutive calibres as a rule, but it seemed to have the edge on handling over the 20. Whichever way one was to choose, I don’t think any shooter looking for a shotgun priced at under £600 would be disappointed with either of them!