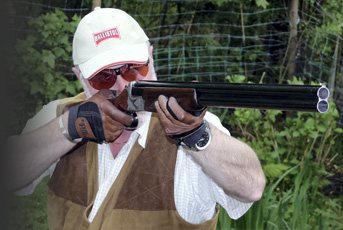 Forty or so years ago Merkel produced shotguns that were equally at home in the field or on the range, to a degree that they were favoured by some of the world’s leading skeet shooters including ex world champion Matthias Dunkel. But as times changed, so did Merkel’s direction, until the advent of the new 2000C. This is a superb yet subtle combination of old fashioned values and modern requirements.

As with most Merkels, the £250 travelling case in which the arrived 2000C is optional, although personally I’d take the plunge since its tailor made. This somewhat parsimonious fact aside, when you open it the sight that greets you is to some extent at odds with itself. This C (Complete) O/U boasts Merkel’s usual dark stained, oil – finished Grade 2 walnut. Also their trademark Anson & Deeley style, steel, boxlock action with single trigger, rich black barrels, a London-style forend and what’s that… multi-chokes!

All this it seems is where the Complete nomenclature is derived from, along with the ability to disengage the surprisingly strong ejectors and of course the rear of the trigger guard located barrel selector. The only items missing from this particular 2000C were the sling swivels, items I requested to be deleted when this gun was discussed many months ago during my factory visit.

Once assembled, as with most of the more basic grade Merkels, this 2000C looked and felt like it was destined to last a lifetime. Higher grade walnut can be specified along with more elaborate game scene engraving. But in my opinion the English arabesque seen here is more than adequate, anything else more or less gilding the lily.

Holding to their heritage Merkel have once again maintained their familiar action to woodwork scalloping around the stock head, with the fit, finish and chequering as good as you’ll find on any shotgun, irrespective of the price. Interestingly, the forend offers a slim, elegant and above all comfortable grip for the leading hand and without a Schnable tip too.

Likewise the Kersten fastener, the cross-bolt locking system that engages the two extensions that project beyond the upper of the two 3” chambers. The locking bar slides smoothly across when the gun is closed, the opposing shorter nib to the side of the right fence is pushed gently inwards to allow the top-lever to swing in for disassembly.

Although more or less a toe in the water for Merkel, and still intrinsically a game gun, this multi-choked version is by their definition meant to be equally at home on pheasants or clays, with the gun’s natural poise ideally suited to either driven or rapidly going away targets. And yes, it caters for both with identical aplomb, the 2000C’s balance and behaviour being ideally suited to both, sporting and skeet the ideal disciplines.

Tried and tested around Bond & Bywater’s summer 30-birder, the overwhelming initial sensation was of equilibrium. Weighing a fraction over 7lbs in the hands the Merkel feels significantly smaller than its steel proofed 30” barrel length would suggest. Only the solid 7-10mm top rib and small brass bead hinting at the design’s original purpose. Choking up with ½ and ¼ although the long internal set incorporates everything from Full to Imp Cyl and along with Express Supreme Comps, the 2000C dusted nearly everything in sight, my only problem being the slightly shorter than I’d like butt.

Fitted at my behest with the optional Germanic cheek piece, the overall length of the stock gave a pull of 14¼” with a drop at comb and heel of 1½” and 2½” with a crisp trigger break of a touch over 4lbs. Despite the slightly compressed hold, the 2000C proved itself to be superbly agile and a true pleasure to shoot. Plus that all-important Merkel feel, look and target view at its core. Opposing pairs highlighted just how responsive the traditional format of the 2000C actually is, the entire gun floating within the hands and from target to target even down to being able to dismount between the two shots.

It’s safe to say that any new steps Merkel take are slow and considered, the 2000C being a prime example. As a classic, stylish all-rounder I don’t think you’ll find better, especially if like me you’re a German gun enthusiast. The style, design and handling verge on iconic to a degree the 2000C couldn’t have been built by anyone else. Would I personally have this gun as one of my own? Yes without a moment’s hesitation! However what I would like to see is Merkel taking that extra step and produce a full competition version that would position them head-to-head with the established names, a position they fully deserve.

Like all guns of this quality and expense I’d seriously suggest you add a few hundred pounds more and opt for the custom made stock so ensuring the 2000C is built to your physical dimensions. Apart from that I’d leave it exactly as it is, even down to the cheekpiece, an addition that makes a surprising and beneficial difference.

We Reckon!
• A working 12-bore that oozes timeless style and heritage
• A classic design with a modern slant
• Old more than successfully meets new