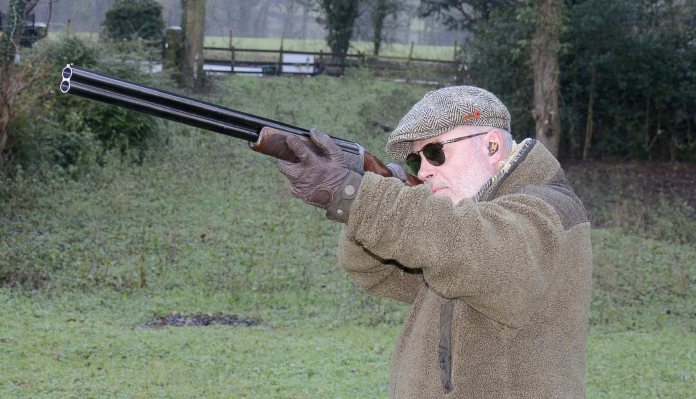 It’s probably safe to say that Rizzini are in some way related to the majority of the Italian gun making industry. It’s also a safe assumption that there’s always been more than one of the famous Rizzini family to add their name to a shotgun. But basically, work on the theory that in the main there’s two of them. Emilio Rizzini, who made the more affordable shotguns made his name with good, no frills smoothbores that were best described as all right. They did what they were meant to and that was about it; E. Rizzini now more or less absorbed by the Fausti name.

Then we have Batista Rizzini, the member of the family who made more upmarket, expensive shotguns that were and are as much about how they look as they are about their shooting abilities. And it’s this side of the Rizzini dynasty you see here, the Exmoor roundbodied game gun dripping Italian style to a degree all you need do is just stand there and let it be admired. No doubt though, after parting with a lump of your hardearned, you’ll want to actually shoot it! So here we go.

Presented in an attractive black travelling case, the lined interior and white slips keeping your Italian purchase and its few accessories safe and sound, it’s when you slide the stock and action into the light that you quickly feel impressed. The walnut of the lacquered finished game stock, complete with a neat soft rubber recoil pad, is very nicely figured, the open radius grip neatly chequered, as is the graceful rounded forend.

With an almost indiscernible palm swell that just adds to the correct placement of the hand, if comment had to be made, it’s that the width of the grip might be a tad wide for smaller hands. Not by very much but some may find the girth a little too much, although a touch of constructive hand adjustment should see the minor dilemma worked around.

The focus of the Exmoor is without doubt the round boxlock inertia action. The matte finish and black background allows the profuse foliate decoration to stand out but without being garish. Beautifully executed, the ornamentation covers every spare millimetre of the external metal surfaces, the decoration extending along the top tang, long throw black top lever, whilst also surrounding the auto safety catch.

Below, the fixed gold trigger blade sits within a large oval trigger guard; the rear, elongated engraved tang extending almost to the base of the grip. The overall effect therefore adds to the inclusive chic and pleasing aesthetics of the Exmoor. Locking neatly into the action are well blacked 32-inch barrels and 3-inch monobloc chambers, although 28- or 30-inch tubes are available.

And as they should be on a game gun, solid mid and an almost imperceptible tapering 6mm - 7mm taper top ribs. Running fixed chokes of Full and ¾, the muzzle’s only addition is a small, matte gold bead, which once again for game is traditionally all you should actually need. If anything, if I were Rizzini, I’d be inclined to open up the restrictions maybe to ¾ and ½. As it stands, whilst high driven pheasants and long distance partridge will be as nothing to the Exmoor, you stand a chance of self plucking and ready mincing game birds a little closer in! The tight chokes will however prove very effective on duck.

Once assembled and mounted, the Exmoor immediately confirms the Italian theory that no matter whether you’re shooting game or sporting, you need a Trap based shotgun with which to do it, or at least that’s what Rizzini would seem to think. ‘Sporterising’ a trap gun is nothing new, many a B25 and MK38 Trap guns being converted to game duties and since the Italians make excellent Trap 12-bores, why not. It does however affect the gun’s handling.

Measuring 49¾-inches in overall length, complete with the aforementioned 32-inch barrels, with an all-in weight of 8lbs 10oz, the balance is just over ½-inch forward of the hinges. Given the Exmoor’s design, it does tend to mean that the gun is noticeably weight forward, the bulk of the mass sitting firmly in the leading hand. The fractionally long length of pull is an exact 15-inches, although the precise feeling and very predictable trigger breaks at 5lbs 1oz. Similarly, whilst the stock is of the game pattern, the general format of the Exmoor means that it tends to shoot slightly high. On the plus side, this physical trait adds in that little bit of extra lead when shooting high, fast-driven birds.

Loading up with 28g Cheddite Mach3 shells, filled with 7½s and heading out onto Malmo Gun’s private layout, the first noticeable physicality is that even with these hard-hitting cartridges, felt recoil is almost nonexistent. However, with the bulk of the Exmoor’s weight well forward, this Rizzini needs to be driven on and driven hard. It isn’t the fastest 12g to start swinging but once underway, the gun moves smoothly in the chosen direction. Once the spent cases need to be disposed of, the ejectors are well-timed but not overly strong, meaning that empty cases gather neatly about sixfeet away from the shooter.

Unlike some shotguns, you will have to get used to the Exmoor, although my recommendation would be to go for the shorter barrel lengths, the 28-inch tubes reducing weight and shifting the balance back towards the shooter. Similarly, shorter barrels will liven up the Exmoor’s handling, which will be significantly to its and the shooter’s benefit. That however could just be me, just as I’d have the plague of the auto safety disengaged; I prefer shorter barrels on my game shooting shotguns, as per Mr Churchill’s accidental design.

You will, you won’t

When it comes to looks, I guarantee you’ll be more than impressed with Rizzini’s Exmoor, its one of those shotguns that ensures you’ll look at least twice if not more. I’m also reliably informed by ASI, the UK Rizzini importers, that whichever barrel length you opt for the price remains constant at £3100 and on looks alone, is worth every penny.

You will or you won’t like how Rizzini’s Exmoor handles, or how it feels but as I’ve said, try the three different barrel lengths, increments of 2-inches can make a tremendous difference to a shotgun’s handling in weight and balance alone. The Exmoor is overtly Italian, the round action and ornamentation adding in no small way to the gun’s visual desirability. And should you be looking for a game gun that genuinely sets itself apart from the rest, Rizzini’s new Exmoor could well be the 12g you’ve been looking for.

With thanks to Malmo Guns for making their private clay shoot available and for supplying the 28g Cheddite Mach3 cartridges.