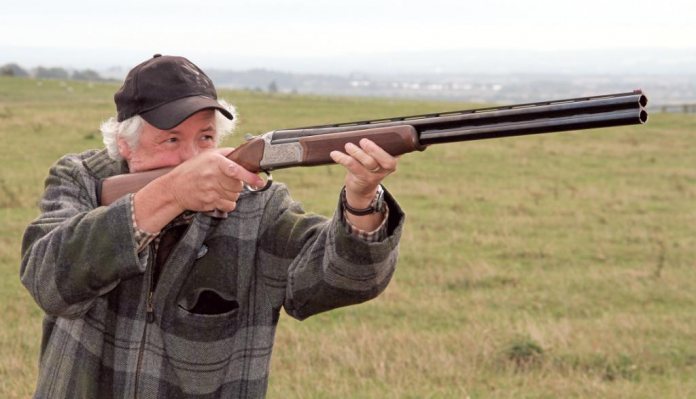 This was my first look at the new 1000 series of shotguns from Webley and Scott and they form part of the Italian made varieties of shotguns from Highland Outdoors. I am not sure what I was expecting but I was really taken aback by the new 1012 12-gauge that came out of the case in front of me.

So many guns these days are light and tinny; this W&S has real depth and a solid feel to it, yet still retaining a good balance and an overall fit and finish that looked very good.

The more I handled it and exchanged the multi choke to ½ and checked over the trigger mechanism and locking system I was really impressed for a sub £1000 shotgun; it felt far more expensive.

Walnut is grade 2+; so, better than most guns in this price range and has a medium colour figuring with an oiled finish with generous proportions with a long length of pull at a full 15.0-inches. I like that, it suits me perfectly. The butt stock has a small amount of cast to align the eye down the rib perfectly and the comb is quite straight.

I really like the pistol grip, as it is big, i.e. the fingers have plenty of room to grip and there is excess below them for adjustment of grip, if you so desire, for differing angled shots. The best bit is the palm swell to the right that settles the grip and this is aided by the large panels of cut chequering. The forend is long and sleek, finishing in a Schnabel tip with nearly the entire sides covered in chequering that extends under the front for a wrap-around grip.

To release the barrels, you have the typical lever release catch that securely clamps in place but is easy to un-latch also.

The walnut is good and dense, hence very strong and feels so, it gives a very good heft to the W&S without being un-balanced and it soaks up recoil very well, see the field test.

Typical monobloc design and lock up with large rear bite and barrels swivelling on two captive pins in the action wall. The ejectors are well timed and strong with some nice jewelling to the monobloc sides and the fit of the lugs into the action recesses are good and tight. It feels very strong and well-finished.

Overall, the finish is good, with a very deep blue blacking finish, carrying on the Webley tradition. These were 30-inches long, a good length for ballistics and patterns, as well as helping with swing. 28-inch versions are also available.

You have a 10mm rib with a serrated finish to eliminate reflections and a single red Day-Glo element for sighting. There are shallow vents below and joining the barrels, eight and seven respectively; this is the Sporter model, the Game version has a solid rib.

It’s a multi choke barrel and comes with five flush fitting chokes from skeet up to full and, being a steel shot proofed barrel, you can use up to ½ choke with steel shot. Barrels are stamped Made in Italy and chrome-lined for longevity and chambered for 3-inch cartridges; so, capable of a good range of light or heavy loads.

As stated, it’s a monobloc system and is quite large and made from steel. It well machined with very few tooling marks. The action being made from a single block of chrome moly steel has a bright coin finish that suits the Webley and is accented by stylish scroll machine cut engraving. This is actually nicely done and quite deeply cut, so looks so much better that some of the shallow, almost stamped engraving, you can see these days; nice one W&S!

The top lever to open the action is easy and has a lot of bite to it, sitting far right for plenty of wear in it. The barrels lock into the action via a full width bolt at the back and bottom of the action face that locks directly into the ‘lump’ below the bottom barrel, standard monobloc style. The barrels also hinge on stub pins inset into the front of the action sides.

The hammers are mechanical, not inertia; so, each pull drops a firing pin on a cartridge and does not rely on the first shot to set the second barrel’s hammer. You also have a non-auto safety; again, my preference with the traditional left position for top barrel and right for bottom barrel. When you open the action, the barrels need to be pushed down, as the new ejectors are very strong and eject the cases with gusto!

Overall, a very wellmade gun that you wouldn’t expect to be below £1000.

It’s hard to describe but it just feels right in the shoulder, it sits flat and eye alignment down the rib was perfect for me and the palm swell was very noticeably, in a good way. Recoil was also really noticeably lower with this test gun, as I had three others on test; the 1012 dampened recoil significantly that allows repeated shots or heavier loads for the recoil shy.

All patterns were shot at 30-yards with the bottom barrel fitted with the ½ choke. First up, where the Eley Grand Prix cartridges, this was the HV load with a plastic wad and a stout payload of 32-grams of No. 6 shot. Ideal for pheasant and pigeon and the total pellet strike was 165. These were really nice and evenly distributed across the board, showing good density and proving those W&S barrels are good. The outer sector had 116 pellets and the inner sector a healthy 49 strikes; a good all-rounder as usual.

Next were the Hull Special Pigeon; again, a load of No. 6 shot and a payload of 32-grams. This time, a total pellet hit at 30-yards of 149 but distributed also the same as the Eleys. A good even pattern, slightly left - it was windy on the test. I had 107 No. 6 pellets in the outer sectors and 42 pellets to the central 15-inch region. Special Pigeon is a proven pigeon load and shot very well in the WS1012.

Finally, the Gamebore Clear Pigeons; another Pigeon load but this time a 30-gram loading of No. 6 shot. Despite its 2-gram less payload, the W&S shot a total of 161 pellets from the ½ choking. More than the Hull’s load, with 32-grams of the same pellets; it shows that you need to test all cartridges to get a picture of which is best for your barrels. These Clear Pigeons had a total of 161 pellet strikes on the boards, distributed with 115 outer strikes and 46 inner strikes from the No. 6 shot.

I know people quite like lighter guns but it’s easy to forget that a slightly heavier or normal weight 12-gauge is still a really good performer, especially when you want a very strong and re-assuring feel to it and the reduced recoil with heavier loads of 32-grams is of real benefit.

It is very hard to knock this 1012 Webley, so I won’t; it just feels right, handles really well and throws superb patterns and, sod the weight, I think it makes the gun!