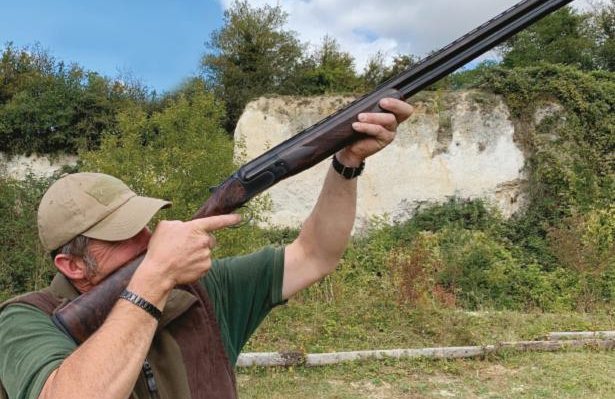 It was probably a little over ten years ago when I first came across Yildiz shotguns, in the form of their fairly basic .410 model. These always seemed to be made to a relatively low cost, resulting in a very affordable product. Since then, I have had no other real contact with this brand and so perhaps rather unfairly was expecting something along the same theme to be looking up at me when the box arrived.

My initial thought, cynic that I am, as I opened the plain cardboard box only to find an ABS case staring back at me was; they’ve sent the wrong gun! However, it had the Yildiz star, which is the company logo, as that word means star in Turkish; so, by now my interest was well and truly growing. Inside the case there were two velvet bags (again a nice surprise), one containing the butt and the other the barrel with forend attached. It was on opening these that I really realised just how much Yildiz had moved on from those initial .410s that arrived on our shores several years ago.

Yildiz started manufacturing shotguns over 40 years ago in the mid nineteen seventies and have now reached a point where they are producing over 50,000 guns a year in 70 different models, that will cater for a wide choice of needs and people. They export all around the globe to 65 countries, with Europe and the USA providing the bulk of the market. As we all know, all the best walnut for gun stocking come from Turkey today and, as with the other Turkish gunmakers, Yildiz do not put anything less than what would be considered Grade Two on any of their products, even if it is from the low end of their price range, at a little over £400. So, what you might pay a fortune for from say Browning, is just standard timber to the Turks.

The test gun was the Pro Sporter, 30” multi choke, 12 bore, it is chambered for 3” (76mm) cartridges and magnum proofed. The barrels are blued and show a 7mm vented rib and finished with a high vis bead, all the rest of the metal work wears an attractive, plain black finish, with zero engraving, which to me looks really good and professional. As a multi choke, it is supplied with a full set of five chokes, but I have not been able to find out up to where the steel rating goes on them; so, it would be wise to assume that half is probably the limit for using steel shot.

The action is all-steel in a shallow Boss-style; this famous build, has and still does, give inspiration to many of the big names in shotgun manufacture. There’s no doubt that Yildiz have done an excellent job with their take on it. The added strength that this style of action provides will certainly give any owner a great many years of reliable service. When breaking down the Pro Sporter, it is obvious to see how strong it is, but also how well it has been finished and I am sure that regardless of the level of CNC machining, there will have to have been some hand work done to get everything fitting so well and looking as good as it does.

The test gun weighed in at 7 ½ lbs, with a length of pull (LOP) of 14 ½” and an overall length of 47”. There is a manual safety, which also provides barrel selection and a single trigger; as one would expect with most over and unders, the point of balance was right on the hinge. Chequering is diamond cut, not too sharp or chunky and provided a comfortable and positive gripping surface.

Despite what I have said about the action, the one thing that really stands out is the Grade Four timber, which puts other manufacturer’s similar offerings to shame, it is quite exceptional.

The grain flows beautifully and the butt and forend match perfectly, with its oiledfinish the wood and black metal look totally at one with each other. The forend is very well proportioned and, much to my preference, is straight with no bevelled end. The pistol grip would be comfortable for all comers, from those with the smallest of hands, right up to those of us that could be described as having hands like shovels. The butt is finished with a black recoil pad that can be easily removed if any alteration work was required, before being re-fitted again.

See it, hit it

The Pro Sporter shot marginally high of the point of aim, as one would expect and certainly I managed to hit pretty much everything I shot at with it, even if some things did take two shots to do the job properly. The whole feel of this gun, for me, was one of comfort and balance, it naturally pointed at what I wanted it to and handled extremely well. I would feel really quite confident of shooting this shotgun in any situation, from a pigeon hide to a clay stand and being able to achieve my best on the day.

During testing, I shot cartridges with loads varying from 21 to 36 grams and even the heavy ones felt very comfortable to fire with no unpleasant recoil observed. The test gun came with only half and three quarter chokes, but a not inconsiderable number of grey squirrels and crows bare witness to how well these worked with 30 grams of #5 shot and fibre wads performed, with some truly barrel stretching crows shot with the second, ¾ choked, tube.

The truth is, when I opened the box what I was, perhaps rather unfairly, expecting was not what confronted me. The Pro Sporter really has been a pleasure to test over the past five or six weeks. I had to fit a slip-on extension to achieve the correct LOP for my longer rams, but once done, it felt every bit as familiar to me as guns I have owned for a not inconsiderable length of time. Would I be happy with one in my cabinet? Most definitely, yes! And that’s before considering the price, with the standard stocked model coming in at £1595 and for one with an adjustable butt retailing for only £1795. With strength of the Boss action, overall quality of craftmanship in the build, lovely eye-catching wood all for well under £2000, I think these would be a welcome addition to any shooter’s cabinet.