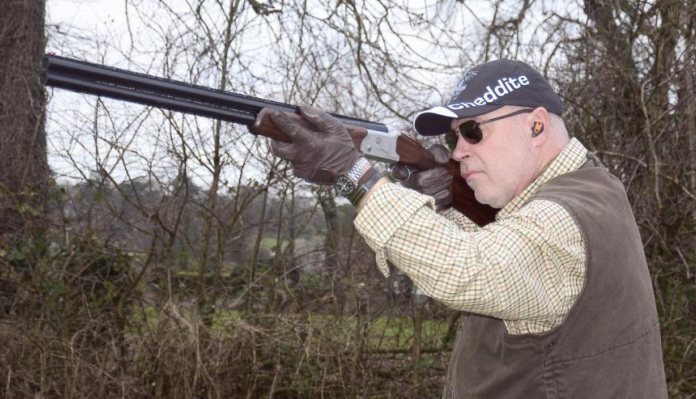 Mention Yildiz to most shooters and they’ll tell you they’re one of the best-priced Turkish shotguns on the market.

They’ll also inform you that Yildiz are also exclusively game guns, clay breakers not something they’ve got involved with, that is until now. The Sporter has been conceived as nothing other than a competition 12g, is available with either 28- or 30-inch barrels or a fixed or adjustable stock. Not bad for a first attempt and at under a grand, not bad value for money given how it performs. It’s also safe to say Yildiz thought big with their Sporter, a fact not lost when you pick it up, this is a big overunder shotgun in every respect.

For want of a better description, the Sporter comes with a set of not quite gloss black barrels, the gun on tested fitted with the longer 30-inch tubes. Complete with a set of flush-fit chokes and a key, an orange lozenge bead sits atop the gentle flared muzzles and 10mm vented top-rib and semi-vented mid-rib, from where the barrels meet the furniture, the barrels float. The monobloc barrels in turn swage into neat and simply finished three-inch chambers and strong, well timed ejectors, a neat row of scrolling disguising where the barrels and chambers actually join together.

The deep mechanical boxlock action is, like most Turkish over-under shotguns, based on the familiar Italian design. The benefit is of course that this style of action has proven its worth and is reliable, so the Sporter is already off to a good start. If I had to level a criticism, it’s the action decoration, the fact the gun is called the Sporter, the word engraved into the bottom edge of each side more than sufficient in highlighting this shotgun’s purpose.

Even the three swirling lines are more than an acceptable addition to the brushed satin finish of the action but sorry, the flying clay pigeon rather detracts. Various manufacturers have over the years elected to scribe a clay target into their action ornamentation but I personally think they look naff, in the case of the Yildiz detracting from what is inherently a neat, well-finished action. On the base of the action just the word Yildiz appears whilst a wide trigger guard protects the non-adjustable blade. Likewise, apart from a lightly decorated top-lever the long, plain top-tang’s only other addition is the broad manual safety, the positive click indicating that you’ve switch barrel order.

Like most Yildiz, the walnut fits nicely and is of a good quality with neat chequering. The well-rounded Schnabel forend fills the leading hand, whilst the soft rubber recoil pad and sporter-style stock is big and beefy, the adjustable comb able to be raised just short of ½-inch and shifted side to side. The curvature and fit of the grip has been well-considered, although the noticeably large palm swell might be slightly oversized for those with slightly smaller hands, the bulge more than filling the average male palm. On the whole though, the Sporter is a good looking, purposeful 12-bore.

The moment you heft the Sporter, you realise that Yildiz was thinking big with this gun. Tipping the scales at 8lbs 6oz, with a balance point directly beneath the hinges, the overall length is 47¼-inches with a length and weight of pull measuring 14¾-inches and 7lbs 2oz. Nothing particularly out of the ordinary but the Sporter feels a large and noticeably substantial shotgun, designed with intense shooting in mind. Once to the shoulder though, the Sporter feels balanced and swings in a smooth, controlled, unhurried manner to a degree it feels almost hydraulic, although you do have to push it along and keep the swing going.

With the adjustable comb at its lowest setting, and fitted with ¼ and skeet chokes, and fuelled by a box of 28g Cheddite Smart Strike filled with 7s, the private layout at Malmo Guns highlighted the relaxed, unhurried mannerisms of the Sporter. It also brought to the fore the excellent patterning of Yildiz’s chokes and the Cheddite plaswad loads, even long range clays shattering with ease. The general dynamics also mean that the gun’s reaction to the shot sends the whole directly back towards the shooter, the straight line of the gun’s reaction to detonation, the well conceived angles and quality ammunition meaning it’s the breaking clay that confirms that the shot has been taken and not a bump in the shoulder.

Yes, it’s not a small shotgun and no, it’s not for anyone of a more diminutive stature but in respect of what it is, flying clay decorations aside, this new Yildiz is extremely competent at its job, the 30-inch barrels making the gun very pointable. It was designed and built to break sporting clays and that’s exactly what it does and does it rather well, the gun’s flat attitude perfect for my style.

It’s always been a point of irony that apart from those with very low set combs, most adjustable stock shotguns are at their best position with the stock unadjusted. I like flat shooting guns but for those that like their competition 12-bore to shoot slightly higher, a moment or two with the hex key and spacers will quickly reposition to where it needs to be.

At £925 the Yildiz Sporter isn’t badly priced, although by virtue of its country of origin, it goes head-to-head with other Turkish and now Italian built clay guns that undercut it. One suggestion would be to try the fixed stock version that costs £875, since it’s my considered opinion that the stock dimensions will suit the vast majority of all round competition shooters. It might only be £50 less but if you’re considering buying a shotgun of this type and in this range; cost purchase price is more than likely to be one of the determining considerations.

The other interesting factor is that with the advent of the Yildiz Sporter it now means that there is now another pair of sub- £1000 shotguns on the market more than worth the price. And perchance Yildiz ever elect to delete some of the action’s unnecessary embellishments, then their Sporter will take on even more appeal.

With thanks to Malmo Guns, (www.malmoguns.com), for the provision of the 28g Cheddite Smart Strike cartridges and use of their private layout.