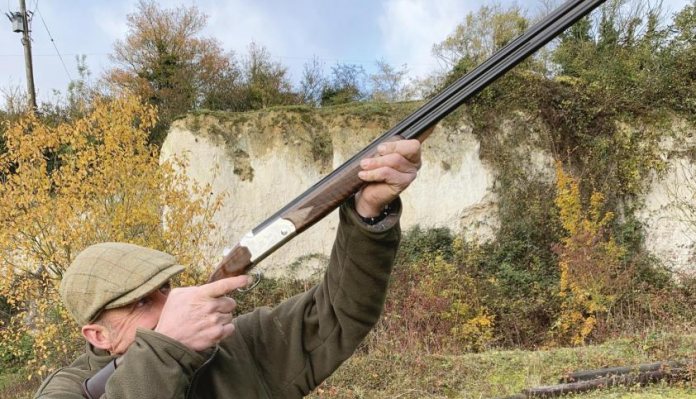 Yildiz of Turkey started production of their over and under (O/U) .410s in 2010 and we soon saw them in the UK. They’re available in several different models; Junior non-ejector with a short butt to the test gun, which is an adult-sized ejector all the way to the Special Lux with hand-engraved side plates and high-grade walnut.

This 410 is built on a scaled down action, rather than some that even today are built on 28 bore chassis. The action is made from 7075 alloy white metal, helping considerable in keeping the weight down, which, aside from the obvious, offers superb balance. Barrels on my tester were 30”, but 26” and 28” are also available, the 30” seem to help handling, so allowing the user to shoot in a more positive manner. There are five chokes supplied and it is chambered for 3” cartridges, the rib is 7mm wide and finished with a traditional bead.

Wood is oil-finished walnut, which is basic but pleasing, their high-grade guns are really striking, particularly when one considers the excellent pricing. The Schnabel forend was not to my liking; I prefer a straight style, which suits my leading hand position better. Diamond cut chequering does the job in providing a positive gripping surface. Wood to metal fit is really quite good, there are none of those slightly irritating gaps or protrusions that some guns in the lower price range exhibit.

Laser engraving is subtle and does not over dress the action. The trigger is single selective, with barrel selection incorporated into the auto safety catch. Weighing 5lbs 4oz, this is not a heavy gun by any stretch. Overall length is 43.75” with a length of pull of 14.5”, which is not too bad. The comb felt fine, but others found it a little low. The trigger had quite a long and heavy pull compared to what I am used to, but after firing several shots this did become virtually unnoticeable. Obviously, this is a lightweight gun, but with the longer barrels and alloy action the balance was good, which was reflected in the handling. If a gun handles and fits well, it is always going to give the user the best chance at performing well and this one certainly offers that opportunity.

I used several brands of cartridge and loads, initially starting with the ½ and ¾ chokes but then went onto ¾ and full. The pattern thrown by the ½ across all the cartridges was rather lacking in density, but the two tighter chokes were putting three to five pellets in a 6” x 3” oval shape at 30 meters, which in 5 or 6 shot is normally enough to cleanly dispatch the target! Many will say that a 410 or even a 28 bore are really only for youngsters to start shooting with and are not capable of doing the job properly: rubbish!

Firstly, only shoot at live quarry at distances that you are capable of hitting, secondly I find shooting these smaller calibres helps or rather makes me concentrate more on what I am doing so every shot taken has to be properly addressed. The reason I changed to a 28 bore for driven game was used to find I got complacent and then started shooting badly because I had switched off. This is something that you cannot do with minor calibres if you intend to hit the target. It is also important to think about what quarry you are after; for example, shooting a fox to dispatch it with a 410 at close range is fine, but I would never advocate using one on a fox drive where Charlie might be 30m + away, rant over!

The Magsonic performed very well at close ranges and are ideal for rats and rabbits in the garden, as they are slightly quieter than the others but not at the expense of a dramatic drop in performance.

The Yildiz loved the Sagas, but most guns in any calibre seem to, the downside being that they have plastic wads. The Fiocchi are unfortunately plastic wadded, but again they performed incredibly well. The Eley 3” were the biggest surprise to me, as in my Mossberg moderated 410 they work very well on rabbits and rats, but this gun did not like them. However, their 2½” shells completely outperformed their 3”, both have fibre wads.

Breaking clays is one thing but when doing a little clearing up on a simulated day this 410 was more than capable of competing with any 12 bores, even hitting, some well over 40 meters high. A few hours in a hide one morning accounted for a handful of pigeons and better still some crows. OK, distances were more modest, as they came to the decoys, but the results were very satisfactory. Grey squirrels coming into the garden to raid the bird feeder also felt the brunt of what this 410 is capable of, but at the cost of a scolding from the Long Haired General when I woke up the house far too early. I suffer for my art!

Aside from the time taken to get the feel of the trigger, there was nothing I did not like about this Yildiz, it ticked all my boxes being a correctly adult-sized, 410 ejector quite capable of holding its own. If you are looking for a starter gun for a youngster, or even fancy a bit of nostalgia using a 410 again, I don’t really see how you would be disappointed with the Yildiz, I’m not.

One final thought though and this applies to all calibres but is particularly pertinent with the minor ones, with the phasing out of lead shot and plastic wads, not before time with the wads in particular. Over the next five years the cartridge manufacturers are really going to have to step up to the mark in the development of loads to replace lead with something else that will do the job humanely and equally as well.