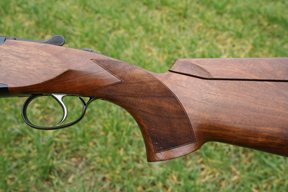 I am always interested in the sort of gun that I might use myself in competition, and the Zoli Kronos over and under with its relatively light-for-length 32” barrels falls into that category. Ten years back, or thereabouts, the Kemen KM 4, the first really successful Perazzi clone arrived on the scene and made quite a splash (not least because the likes of George Digweed and Richard Faulds achieved so much using the guns). The Kemen looked much like a Perazzi, and shared a similar removable trigger-lock that was powered by leaf springs (it was not the first Perazzi clone, of course). It handled very well. Notably, the stock shapes were rather different to the Perazzi - better suited to sporting clays - and the barrels tended to be lighter too.

The Zoli Kronos looks rather like a Perazzi or Kemen - and imitation, as we all know, is the sincerest form of flattery. Zoli is a relatively well known name in the UK where we have seen both over and unders and side by sides bearing the name, usually targeted at the middle of the sporting market. However, Zoli, like many Italian ‘mass’ producers also make some very fine quality hand made guns - I have recently bought a pair of old Zoli side locks built on Holland & Holland style actions and they are top quality, handmade, guns that would now retail at around £20k a piece.

Zolis are imported into the UK by Stephen Fawcett Guns of Lancaster, but the test gun belongs to my friend and shooting partner, Peter Jackson, and he bought it recently from Andy Whitmore of Avalon Guns at Street in Somerset.

This sporter model has 32” tubes (there are 28” and 30” options), 3" chambers, and a Boss style bolting system similar to Perazzi and Kemen, and like these guns, the Zoli has a removable trigger unit. The action is powered by coil rather than V springs.
These changes keep the price well down. Coil springs, as also used in many Perazzis now, tend to be less prone to breaking than leaf springs (although, the finest trigger pulls are usually associated with the older style of spring which, almost universally, is used by the makers of bespoke arms for this reason). That said, the trigger pulls on this gun and a Perazzi 2000 that I recently shot (both coil spring guns) were exceptionally good.

Putting the gun under our microscope we might note that the barrels of the Kronos are, of course, monobloc - now almost universal as far as mass made over and unders are concerned. They are 32" long, as noted, have relatively short forcing cones (about 1/2") and are fitted with multi chokes. This gun came with both a flush fitting set and extended chokes (14 in total!). The sighting rib has a modest taper and the side ribs are ventilated.

The barrels have been made well. Inside and out they look good. They are well blacked too. The internal bore diameter is 18.5. This is significantly wider than many Italian guns (18.4 is typical today), but I would prefer to see 18.7. It is my experience that a wider bore really does reduce effective felt-recoil (as does the angle of the stock comb). The factory fitted multi chokes are well machined with, in the case of the extended set, lateral flutes instead of the usual knurling. Although the barrels are not especially heavy themselves, the Kronos is slightly muzzle heavy (balancing about 3/8" forward of the hinge pin with the extended chokes fitted).

The action of the Zoli is black which, of course, reminds one of a Perazzi or Kemen. But, in the case of the Kronos, the border engraving makes it look a little different. The Kronos name is picked out in gold at the bottom rear of the action wall. It looks quite smart - but I think it would have looked better without the rather over dominant, broad, border engraved lines around the action walls.

We have already noted that there is a detachable lock and it is removed by means of an Allen key, unlike the systems on a Perazzi (pushing the safety forward beyond its normal position) or a Kemen (where there is a sliding bar that is pushed across to the rear of the trigger). Frankly, it is a bit fiddly to remove the lock (not to mention to replace) of the Kronos, but this is a small quibble.

Workmanship on this Zoli is generally good. Safety and top-lever are well shaped. I especially liked the shape and finish of the adjustable trigger (polished steel). It was one of the best profiled and finished triggers that I have seen for a while (adjustment is achieved in the usual manner by means of an Allen key). All controls fall to the hand well. Top lever and non-auto safety functioned well. Trigger pulls were especially good, breaking at just over 3 pounds. The ejectors were well timed too.

The Kronos also scores highly in the stock department as well. The butt was made from a nice piece of walnut with significant figure. The wood was quite dense too. Length was a standard 14 3/4" including a thin black pad.  Drop at comb - with the adjustable comb down - was very close to the standard 1 3/8”, with drop at heel about 2 1/8” (a little high for an adjustable comb gun, but ideal for a solid stock gun). Nothing wrong here. Happily, I was still able to set the gun up for Peter - who is pretty close to Mr. Average in gun-fit terms - near perfectly.

As he closes his eye, all we needed to do was get his pupil sitting on the breech with his head comfortably positioned on the stock (those who shoot with both eyes open may need extra cast in some circumstances - notably when they have master eye issues - which may bring the eye well to the side of the rib’s centre line).

Finish on the stock was good. Matt oil or something very like it with nicely cut chequering that provided good purchase. The gun also had a very nice forend of subtle beavertail style without thumb grooves - one of my favourites.

Peter and I shot the Kronos extensively at the Braintree Shooting Ground in Essex. Regular readers will know that I am very familiar with the well presented targets at this premier ground. To really test the Kronos we decided to shoot at some seriously long crossers - it had no problems with the close stuff. With half and half choke fitted, we started at about 35 yards and kept moving back in 5 yard increments - the Kronos kept breaking the birds! It did not feel especially refined. I could feel a little vibration in the gun and felt recoil was average. BUT, it shot very well indeed and Peter is extremely pleased with his purchase. The gun was virtually as new and he paid in the region of £1,700 for it. As the new price is just under 2 1/2K he is quite satisfied.

Overall, I rate this gun quite highly, there are some points on quality control that could be improved, but it shoots very well - very pointable and very swingable - my magic combination. The long barrels are definitely the way to go. I also like the nice presentation of the gun in a decent case with lots of chokes. A good sporting gun and especially good value for money.