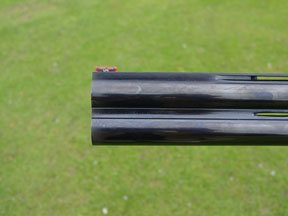 This month we are looking at a well presented competition gun, the Kronos, manufactured by the medium sized Italian firm, Antonio Zoli. The Kronos is imported into the UK by Stephen J Fawcett, based at Lancaster in Lancashire. The gun looks something like a Perazzi and might be used as a sporter or as a trap gun. It is equipped with an adjustable comb and a detachable trigger unit.

The wood is nice and the quality of finish is right up to standard. One has to say that the first thought on opening the box, though, is that this gun is a bit of a Perazzi clone. But, what’s wrong with that? The Perazzi is a fabulous gun that many can only aspire too. The Kronos appears to offer a lot for a price at around £2,200 (the adjustable comb version as tested has an RRP around £2,400) which is just half of its metaphorical big brother.

The Kronos is not just a copy, though. It may look quite like a Perazzi (or Kemen) on the outside because of the black action, and it may have a detachable trigger lock, but the action does not have Boss style draws on the inside.

The Boss system is used in Perazzi, Kemen and several other modern guns, but
I am not convinced that it does much to materially add to their strength (though it looks impressive). Why bother, anyway? Over the years, as steels have become stronger and gunmaking more scientific, locking systems have become far less complex. Take, as an example, the conical locking bolts of the Beretta 55/68 series – brilliantly simple and very effective.

The Kronos does lock up like a Perazzi in some respects; extended, radiused, rear lump projections, machined as part of the monobloc, locate in vertical slots on the action face as the gun is closed. The bolts move in and out of these slots and make contact with and lock down on bites cut at the top of the monobloc extensions. It’s well engineered and, combined with the now common Woodward style hinging system where stud pins are located at the knuckle (an idea also copied by Beretta, Perazzi, Kemen et al.).

The trigger unit of the Kronos is detachable as noted, but it is a bit of a fiddle to remove and requires an Allen key and some considerable patience. It is not as ingenious as the Perazzi system where one must push forward on the safety beyond its normal off position. Once one has got the trigger mechanism of the Kronos out, though, one discovers a well made unit. Trigger pulls are crisp too. One notable feature of the action is that there is a barrel selector on the safety. Putting a safety-mounted barrel selector on a gun with a detachable lock is quite a gunmaking challenge. Zoli have met it.

The monobloc barrels on the test gun were just under 30” long (that’s 75cm
for Europhiles). They bear Italian marks for 3” (76mm) shells. This is
increasingly, the norm. I cannot imagine anyone wanting to fire 3” cartridges
through a competition gun like the Kronos, but it is nice to know that the gun will bear the pressures. It also shows that the makers have confidence in their product.

Sighting and joining ribs are all ventilated - always sensible in a competition gun because it helps dissipate heat and means that mirage effects are less likely to be a problem). The sighting rib is a flat, parallel type with a width of 11mm and a shallow centre channel. The design was just a little too wide for me, my preference on competition guns is for a 10mm rib without centre channel or a taper rib. The translucent red front sight got my seal of approval, as it did not dominate one’s vision, but was big enough to be a useful guide to subliminal alignment.

The barrels of the Kronos pass muster too. The forcing cones were extended beyond the norm, and the barrel bores were not excessively tight. The latter were marked up at 18.5mm (.728”). This is larger than the Italian norm (18.4mm=.724”), but I would still prefer to see 18.7mm (.736”). I associate larger bores with reduced felt recoil (and some argue that they improve pattern too – if they do, I believe it is only because of reduced operating pressures).

External finish was good. Blacking was lustrous and engine turning on the monobloc
side is always a nice touch. I was also pleased with the barrel weight – 1480 grams – which is near my ideal for a 30” gun.

Five multi-chokes are supplied with the gun. Oddly, they are of the concealed type.  Extended chokes would suit the Kronos better. They are so much more convenient and make gun cleaning significantly easier.

The Kronos really scored in the wood department.  If they are all like this, no one is likely to complain! The adjustable stock is a useful feature too. On first mounting the gun, I found the picture a little off-centre and flat. This took but a few minutes to correct. An adjustable comb is not something that one should play with all the time, but it does provide a simple and cheap means to fit a gun. It also means that a gun set up for sporting might, on occasion, be set a little higher for trap (though I have no problems using the same gun for English Sporting and DTL, it is only for ABT and the international disciplines that I find a little extra comb height helpful).

Stock shapes were pretty good. The comb on the Kronos is quite full and there is a palm swell on the quite acutely angled pistol grip stock. The grip was more a trap than a sporting design, but it suited me quite well, nevertheless. Even the palm swell seemed to suit. I am always a little wary of palm swells as standard features, you can almost guarantee a palm-swell will not fit 50% of the people who pick the gun up – people’s hands are so different.

The forend on the Kronos was of the Beaver-tail type with a round section belly and flattened sides. I liked it. It filled my hand well. It was comfortable and provided good purchase.

I shot the gun on a wide variety of sporting targets at out my usual venue, the Braintree Shooting Ground (Clayhouse Ltd). I also shot it on a trap layout where it did well. The barrel weight suited the gun. The stock design allowed for good control on almost any target. Recovery after the first shot was good. Generally, I felt that the Kronos was a gun that one could shoot consistently. There were no unpleasant surprises. The Kronos offers a lot for the money. I would like to test a 32” version in due course.  When I do you will be the first to know! Meantime, if you are looking for a new sporter or DTL gun this is worth serious consideration.

My thanks to Lyalvale (Express) for supplying the cartridges for this gun
test.