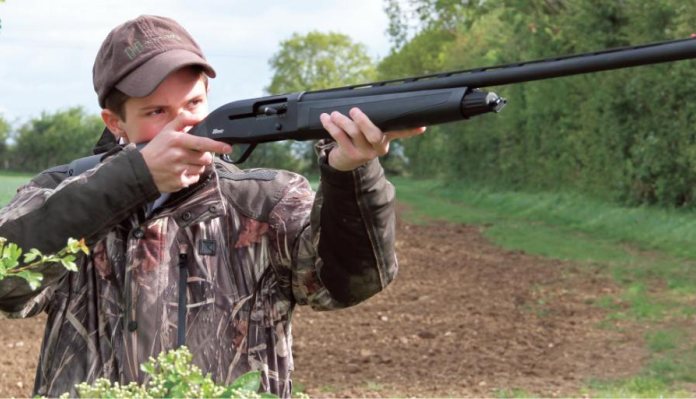 I like a good semiautomatic shotgun; not only for their quick firing nature and extra third round but the looks appeal to a rifle shooter like me.

Armsan are a name that has become very familiar these days in shotgun circles but for all the good reasons; it’s one of the many Turkish manufacturers but has a very good reputation.

I’ve tested many an Armsan and own a 20g and 410 version of this A600 series of semi automatics and really appreciate the build quality and price point.

For only £474.99, what’s not to like? You can appreciate its light weight and overall good quality for what is realistically a budget gun. The A600 series comes in various models from camo, synthetic wood, magnum etc, but this is the 612S, the basic model with a matt finish, soft touch black synthetic stock, multichoked 28-inch barrel, fibre optic sights and sling swivel studs and stock drop spacers. It is also interesting to note that Armsan is only one of a handful of makers that conforms to the tight ISQ9001 protocol that ensures reliable, accurate and safe manufacturing standards to a high standard and so a 4 year guarantee comes with every gun.

A set of three chokes and key are supplied in a plastic wallet covering ¼, ½ and full choke in 12-gauge and are proofed for steel. These are standard chokes that fit inside the barrel and sit flush, unlike the 20-gauge version I have. They are proofed for 3-inch chambers and have the fleur de lis proof marks for steel shot and are therefore good for any normal 12-gauge load, with only the gas system limiting the weight of shot that will function smoothly.

The barrel is 28-inches long with a slim, 8mm vented rib and a single fibre optic red element to the muzzle, which is highly visible and there is no need for a second bead along the rib.

The finish is a very matt, almost Parkerised finish, which is ideally suited for hunting purposes that stops reflections, but it can mark easily, i.e. blood, sweat from hands but is easily wiped clean. This finish is mimicked on the action too, so a good overall subdued but correct, in my mind, finish for what is essentially a working gun.

The action is a gas piston system with large twin ported barrel vents and sliding stainless steel piston ring that seals on firing and engages the operating arms that cycles the bolt system. All these parts fit very well and have an overall finish of a polished nature with the action bars sliding very well.

The action profile is very typical, sweeping rounded back and slim girth and overall matt finish with only the model and maker’s name highlighted in white lettering. You have a dovetail cut into the top of the action for red dot or scope use, so further making the little Armsan more versatile. I always like this, as I personally do use a scope on a shotgun quite a lot.

The bolt has a hard, matt blued finish with a large, single claw type extractor, which has a generous grip to cover a good surface area of the fired cartridge’s rim for extraction and ejection and it’s reliable, as the ejector spur really hits those case rims out of the Arman’s action. The bolt handle is quite slim but serrated and curved, so no problems to handle with or without gloves.

Ejection is via a small ejection spur situated in the left-hand side of the action wall and flips the spent case out as the bolt moves rearward.

Trigger-wise, you have synthetic trigger guard with a nice cut-out at the rear edge, so that the middle finger does not get walloped by recoil. The trigger itself is black, slim and smooth with little creep and broke very cleanly at 5.25lbs on the scales.

The safety is your typical cross bolt trigger guard mounted type; pushed left is fire with a red warning ring visible and right blocks the trigger movement; you can drop the whole trigger unit via a small knock out pin for cleaning, if necessary.

The magazine follower is straight forward, with no cut off etc.; however, it is wide enough for easy access and ventilated with a small black button to the right bottom of the action to operate when the bolt is held open on the last round.

I like Armsan stocks, especially the synthetic models, as their synthetic matrix type core has a tough outer shell moulded in two halves for strength and a good dense feel without adding weight. You also have that really nice, field-friendly overall soft touch finish, rather like the old Hogue stocks.

This does add extra grip to the moulded-in chequered panels to the forend and pistol grip but watch out for ingress of mud, blood etc., but it can always be removed with soapy water. Length of pull is 14.25-inches, so fine for most people and better than some. You also get a set of sling swivels, so that you can sling it over the shoulder when making your way to the hide or across rough terrain. Finally, a good sized, black ventilated rubber recoil pad finishes off a good overall stock. One thing, though, the forend has three tabs at its rear that need to seat into the action face and this, when new, needs a good pressure downwards to get them in place – just saying.

Like the other Armsans we use, there’s a really nice feel to it; it simply does not feel like a £474 shotgun! I feel comfortable with a semi, as it was my first real shotgun and I like the way the A612 is light, not too long and just sits naturally in the shoulder and, to me, my eye is always looking straight down and along the rib. The gas system is very efficient but, like all new semis, needs some degree of running in to shoot the lightest loads.

24-grams at first were reliable with the odd non-eject but after the tests they were all ejecting well and anything with a shot weight above this was fine from the start. The whole action is very solid, and the bolt can be a bit stiff to start with and, when held open and then released, it really whacks home, the sign of a good strong return spring that should last a good long while.

Recoil too seemed very manageable, which might be due to the gas action, recoil pad and the line profile of the A612 on the shoulder; whichever, it’s easy to shoot well and take a second shot quickly, without losing that sight line or lead.

Put to the test

I fitted the ½ choke and set up pattern boards at 30 yards, as usual, and shot some pigeon and game loads and used 28-gram plus loads.

Gamebore Velocity Plus has 28grams of No. 7.5 shot, so clays really, but still good for squirrels and ferals. I had a total of 299 pellets on the board, with 104 inner and 195 outer.

Eley Grand Prix HV, with its 32-gram load of No. 6 shot really gave a fine and reliable function and patterned very well. I had a total of 177 pellets hit the boards at 30-yards, with 68 inner strikes and 109 outer hits.

Mirage Felt is a cheap and very effective round and the felt wadding functioned very well in the A612. I had a load of 30-grams of No. 8 shot. so good for a spot of clay or simulated game! A total of 217 pellet strikes and 78 inner and 139 outer hits, all well distributed.

Finally, a steel shot load from Hull. Their Steel Game is one of the best steel loads and its 32-gram FE4 load gave very centralised patterns, of 169 total strikes with 54 inner hits and 115 outer strikes.

Quite honestly, what is there not to like? Armsan’s build quality is one of the best of the Turkish guns and, with the performance, this A612S, at the price of only £474.99, is the bargain of the century!