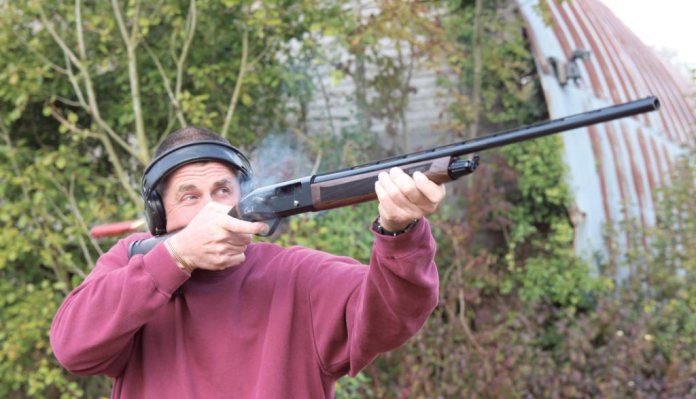 I am a great fan of small calibre shotguns; they just seem to hold a magical interest for me. When told that Highland Outdoors had a semi-auto 28-gauge in from Armsan and asked if I would like to review it, I was as excited about the prospect as my four year old waiting for Father Christmas.

At first glance of the stock all you can say is: wow, what a piece of wood! And I did think that the quality puts many shotguns to shame that cost thousands rather than the hundreds of pounds this one does! The stock really is a lovely piece of oiled walnut and the grain is bought out very well.

The same quality is also evident in the forend, with checkering on the pistol grip and up front as you might expect. It’s well executed too, providing good purchase whilst not feeling too sharp to the touch. The butt measures 14½ inches from the trigger, the gun comes with some extra stock spacers or shims that fit between the neck and receiver. These will add up to an extra ¼ inch to length of pull (LOP) and can also be used to adjust the cast slightly by raising or lowering the comb.

On this model the finish is all-black, but there’s the option of the Cre 8 DW Excelsius with the receiver and magazine cap in the white. The test gun has a 28 inch barrel supplied with three chokes, Full, Modified (half) and Skeet. They come in a hard plastic case with the choke key, the stock spacers are also to be found inside too.

The test gun is a standard 2 + 1, Section 2 shotgun with 2¾ inch chamber and weighs 2.5kg. It is possible to have 24 or 26 inch barrels and the woodwork can come with a gloss finish. Looking at the oiled finish I cannot imagine why anyone would want the gloss!

Working parts hold to the rear when pulled back on an empty gun with the generic bolt release button found on many autos situated below the chamber, they also hold open on firing Delight the last shot. As with many semi-autos the Armsan runs on a gas/piston operating system. The safety catch is the standard push button (cross bolt) to the rear of the trigger guard.

It is only when you pick the gun up that you realise how well it has been put together! The balance is superb and it handles incredibly well, no doubt due to it being built on a true 28-gauge action as opposed to that of a 20-gauge. This gun has what I like to call real pointability, even my wife picked it up and declared that it felt great and perhaps I should buy it for her and the children to use, when they are old enough. There goes my new gun then!

But onto the test, I had to add a one inch spacer to the stock to give myself a sporting chance with the LOP, it looked a little ‘Heath Robinson’ but worked well! As I already shoot a 28-gauge I was able to run a wide variety of cartridges through the gun from Saga, Eley, RC, Hull, Gamebore and Bornaghi in loads varying from 16- up to 25-gram with both plastic and fibre wads. I opted for the half choke as full always seem a little too much and skeet not really enough to keep a dense enough pattern. I have also found with my 30 inch barrelled over & under that full can blow the pattern with some loads creating alarming gaps. To start with I carried the Armsan with me on my rounds checking traps and found it to perform very well taking occasional shots at pigeons, rabbits and vermin.

A lot of shooters are under the impression that small calibres such as 20 and 28-gauge lack the power of a 12-gauge. This is certainly not the case, you just have to be more accurate, and to quote Dirty Harry in the film Magnum Force, “a man’s gotta’ know his limitations!” By this I mean be aware of what you are capable of, bearing in mind the extra accuracy required, to achieve clean humane kills.

The real test for this little beauty came on one of our simulated game days. We had a space in the line on the high bird drive; this went on for around 10 minutes during which I fired just over 100 cartridges with not one stoppage. The only slight problem was the hold open after last shot failed three times but that was towards the end of shooting and the gun was getting bloody hot. It got to such a degree that the heat coming through the forend made it on the edge of becoming uncomfortable to hold. Having said that it is not normal to shoot with that intensity and under all more normal shooting conditions I have found no problems.

The only real niggle I have with the Armsan is when unloading, in that when the working parts are pulled to the rear the next cartridge drops out from the magazine tube. You may only want to take the chambered cartridge out but end up doing a full unload. When one considers what an otherwise great gun this is at a very reasonable price and with beautiful wood I think my niggle is a small price to pay for owning such a gem. Would I buy one, well the answer is yes, I am going to! I just need to work out how to stop my wife from wanting to shoot it so I can have the stock adjusted to the correct length for me.

If you fancy something a bit different that looks very pleasing on the eye, will not break the bank and with masses of potential then this is the gun for you.