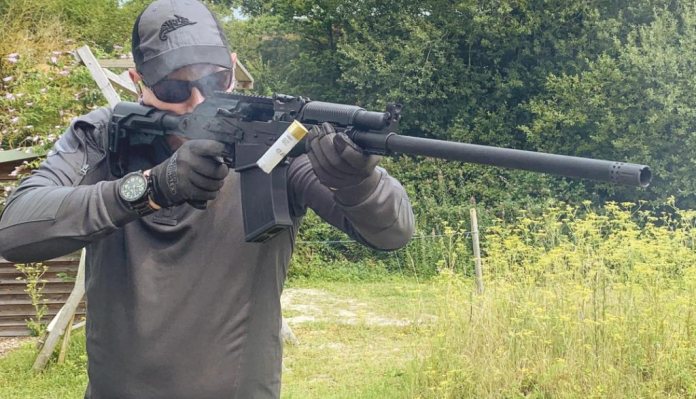 There’s an old saying; if it walks like a duck and quacks like a duck, then it’s probably is a duck! Such is the case with this month’s gun test, the Armsan RS-S1, semi-automatic, box magazine fed, practical shotgun (PSG), as to my eyes it’s a Molot Vepr. However, research shows early guns were built at the Izhmash factory who also make the Saiga M12 that predates the Vepr. However, since 2014, there has been an embargo on importing Russian-made firearms into Western Europe, which includes the M12 and Vepr.

The M12 was probably the first gun of its type to hit the UK Practical shotgun scene, in quantity, and it caused quite a stir. The feed system allowed for faster reloads when compared to tube-fed designs like the Remington 100/11-87 and Benelli. The Vepr came later and, to my eyes, was an improved Saiga and also rated as the best of its type. It’s also very military in looks and layout, certainly when compared to a sporting semi-auto, so in some ways and areas appears a bit dated.

Best of its type regardless, after 2014 you could not import one, but there’s more than one way to skin a cat. Enter Highland Outdoors, one of the big movers and shakers in the UK, whose massive portfolio includes ArmSan shotguns from Turkey, who make some nice gear at good money. Part of that is the RS-A2J semi-auto a tube magazine PSG gun based on their sporter. Paralleling this, is the RS-S1, Vepr look-a-like, obviously made under licence so therefore neatly side-stepping the embargo; nice one! It’s ridiculous really; you can’t have the original, but you can have the same thing with a different name.

I’ve tested the older, fixed butt Saiga 12s a few times over the years and a Vepr once (before the ban) and first impressions go to the latter’s more modern build and improved features and the basic nature of the former. The receiver is modelled after the larger and stronger RPK (AK light machine gun), good idea to take the pounding of heavy buck shot and slug loads. Most noticeable, is the large, angled, polymer magazine well that means a faster, straight in reload, as opposed to having to hook its nose in and snap it back.

This is further improved by the larger/ extended release catch at the rear of the housing.

Nice too are the separate, manual bolt hold open catch and bolt release, which works in conjunction with the automatic last round hold open. However, some things don’t change and the large and clunky safety catch lever on the right of the action remains. Always stiff to operate, it does not compare well to a cross-bolt or tangmounted system seen on all modern pumps and semi-autos.

The standard furniture consists of an AR15-like pistol grip and a fatter, ribbed version of the 2-part AK forend, both in black plastic. It’s quite short and forces your hand back, not so comfy if you have longer arms but still offering plenty of grip. The top part of the handguard is removable and retained by a short (and very stiff lever) on the right of the sight block that allows access for cleaning. There are three gun options; first a sliding, four-position-type, CAR15 buffer tube (TELESCOPIC), this L-shaped design has a curved rear plate with rubber recoil pad and a height-adjustable comb and offers four lengths of pull – 15, 14.5, 13.5 and 13”. Plus, you get a choice of Cerakote, coloured finishes: black, Titanium grey, tan, Multicamtype and green. Secondly, the MONOBLOCK, which is a sort of skeletonised open thumbhole grip in black. Finally, WOOD, with what looks like Walnut (what else) in more traditional AK straight hand layout. Poshest timber I’ve ever seen on a Kalashnikov! Importers Highland Outdoors show all three on their website, with quite a price difference between the TELSCOPIC and the other two.

For the UK, the barrel has to be a minimum length of 24” and an overall of 40”, which must be measured from the muzzle end and not the choke face. In this case and with the butt at its shortest length, you get 24/42.5”. The bore and 3” chamber are chrome-lined and the gun comes internally threaded with three multi chokes: Full, Modified and Cylinder and a fitting key. The first two are a flush fit, but the last is extended and shows a radial muzzle brake.

Typically AK are the iron sights; there’s a low post in protective wings on top of the gas block that’s elevation-adjustable. The rear unit is a tangent, U-notch type graduated from 100 to 800m that’s windage adjustable by a rotary drum like the RPK, this system is a little OTT for a practical shotgun. The sight radius is a short 9.5”, which is backed up by a 7.5” Picatinny rail on the receiver, top cover for a low powered scope or red dot, which would be the obvious choice for slug shooting. This puts them quite high over the bore line and the adjustable comb now makes a lot more sense for a stable head position in this mode.

Field testing showed the Vepr was very ammo-friendly; from #8 clay loads up to 1oz rifled slug, it cycled them all and always held open on the last round. I first thought it used a self-regulating mechanism, but closer inspection showed that not to be; instead, a simple, un-regulated fixed open port tappet, gas piston system. Well, it certainly works!

Controls are the basic AK-style with a few more features that keep it more current with the modern tube mag guns. The cocking handle is pleasingly large, although the aforementioned big and clunky safety remains. It’s not well placed for maintaining your firing hand grip, being higher and more forward mounted and you just have to put up with it. It pushes down to FIRE and up for SAFE, where it also acts as a bolt block. The magazine catch is huge, and its lollipop shapes makes it ambidextrous in operation.

Just under this is the manual bolt hold open plunger that pushes up to engage with the action held to the rear. On the last shot, the magazine actuates the auto hold open and a square tab slides down, forward right on the pistol grip. With a full mag inserted, push it up with your trigger finger to drop the bolt; conversely, you can just retract and let go of the cocking handle to the same effect.

Either side of the base of the buffer tube are QD sling sockets with one, QD swivel supplied. At the end of the forend are ambi sling loops, with a short section of Picatinny rail under the sight block, so that you could fit a bipod, foregrip or torch/laser.

Stripping is simple, cock the action and let the bolt go forward and take the safety OFF. Press in the square catch with top button at the rear of the top cover and lift it up and over, it won’t come off as it’s hinged in position. Push in on the rear of the guide rod and spring and remove it rearwards, followed by the bolt assembly. To remove the handguard/gas tube, rotate the lever on the right side of the block up and forward; it’s stiff, so you might need a tool, I used a small, adjustable spanner. With that off, you can see into the front of the gas port, also the trigger mech is easily accessible for cleaning.

You don’t have to like the looks and clunky feel of these AK guns, as the AR-types are visually slicker and handier. However, when it comes to the all-important reliability and toughness considerations; Mr Kalashnikov’s original design shines through as it always has. Bombing up the 5 and 10-round mags that come with the gun, I rattled through 100-rounds of mixed bird shot without missing a beat, then moved up through weights and shot sizes to finish off with Winchester 1oz rifled slug. It’s not often a practical-type semi will eat everything.

Recoil was more noticeable with the slug, but that’s to be expected, but one thing I’d never experienced before was the kickback on my trigger finger with this ammo, as the mechanism re-set after each shot. It got quite painful and I had to put a glove on. Control functions, like the bolt release and safety, were a bit stiff, but more rounds help to smooth things up. Although I appreciate the mag well that allows vertical insertion, you still have to slap the base of the magazine to ensure that it locks in place.

Prices vary, as Highland list the official SRP at £999 (TELESCOPIC) and £782.99 for the MONSTOCK and WOOD, however a trawl around the shops stocking the RS-S1 showed an average of around £890, one TELESCOPIC offer was tagged at £620. Magazines, the average for a 10-rounder seems to be £59, although I have seen one dealer asking as high as £100. This is the rub with any box mag PSG gun, as you will need a minimum of 5 x 10-rounders to handle those long jungle runs, so rigged and ready could add around £300-£350 to the bottom line.