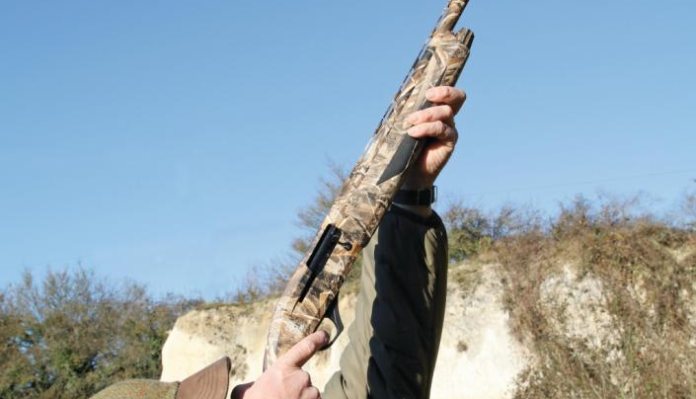 Since I looked at the over-and-under shotguns from ATA, supplied by Sportsman Gun Centre, a month or so ago, I have had the opportunity to find out a bit more about ATA. They started by doing repairs to guns in 1955, the founder Celal Yollu, produced his first side by side in 1967, which was also the first produced in Turkey. By 1990, the business had moved to Istanbul and the first semi-auto was in production under the Vursan trademark. This caused interest from some of the big established names on the world market and a partnership was struck with the Beretta group in 2000, this was very evident in the over and under I tested previously, as well as in this Venza!

The test gun, the Venza Cammo Max 5, is a 3-shot (Section 2), multi-choke, 28-inch barrelled 12-gauge semi-auto and is also available with a 30-inch barrel. It’s supplied with a set of five chokes and is commonly found; up to and including half choke are steel shot rated. The length of pull is 14-inches (355mm), however, there are two additional 5mm extension spacers for the butt and the longer screws required for installation if both are used. There is also a set of shims that give some adjustment to cast and comb height if desired, you have to hand it to these boys, they really do think of everything in aiding customer satisfaction. Weight is a very agreeable 7½lbs and balance is good and did not feel at all muzzle-heavy when in use.

As far as handling is concerned, the Venza just seemed to point naturally and target acquisition was quick, this is down to the design using an ‘angular body’, which helps to bring the bead directly in front of the eye quicker. This means that the shooter focuses on the target faster and with less distraction; having shot this gun that is not a claim I would dispute! To put it another way; this gun has loads of pointability and was a joy to use.

The cammo finish is well done and with the grippy rubber inserts in the forend, pistol grip and comb a firm grip is easily achievable, even when your hands are cold and wet, a serious consideration with safety in mind, especially when wildfowling.

The Venza uses their patented Gas Pressure Control System (G.P.C.S.) to function, which allows the user of any cartridges from 24-grams right up to magnum loads with no loss of function and only minimal extra felt recoil. It works by integrating short recoil and a gas pressure operated systems. When high pressure cartridges are used, the barrel and all the moving systems move backwards by opening the gas discharge holes, the pressurised gas flows to the gas chamber through the barrel and exits from the discharge holes located at the end of the forend. Which in turn means recoil is reduced and there is much less barrel flip, allowing faster target acquisition for follow up shots.

If lower pressure cartridges are used, the barrel does not move backwards but the pressurised gas that flows to the chamber pushes back the plunger, which in turn cycles the working parts. The operating system is explained in the instruction book in detail, with some excellent colour photographs, making maintenance straight forward! The G.R.C.S. really does work very well and all the loads I put through the Venza cycled well without being uncomfortable, even when using some snotty 42-grams, or causing stoppages with the 24-grams. The only ones that caused a problem were 21-grams, which only partially cycled the action, but they were very light!

The safety catch is at the rear of the trigger guard and is a little too small for my liking. The rib is a modest width, with a highly visible red bead at the end of it. One of the really pleasing features is that the shooter does not have to do a complete unload when removing a chambered cartridge. After removing the shell, moving the lever located next to the trigger guard will release the next cartridge from the magazine, which can then be removed by partially cycling the action by hand.

I was fortunate enough to have the Venza for over a month, during this time I had it with me most days whilst doing my rounds around my shoot and it performed faultlessly. Handling was effortless and target acquisition was very quick from the onset of the test, although there are considerable differences between it and my Benelli M1. I felt just as confident using it, which speaks volumes when one considers I have owned the Benelli for 17-years.

The Venza seemed to shoot where I pointed overall, and I felt no less accurate with it than any of my guns. The operating system is very efficient and when using heavy 36-gram loads the recoil I perceived seemed less than from my Benelli!

This is the second ATA shotgun I have looked at, the previous one being an over and under, and in this case, aside from the safety being slightly on the small side, again I could find nothing I did not like. Assuming these shotguns last the test of time, I think they are a winning formula, how on earth they can be so modestly priced is beyond me, as from what I have seen so far, they could easily cost over £1000 and you would not complain!

The ATA range carries a 2-year warranty, although I would be surprised if anyone should have to cash in on it. Currently there are four models on offer, all available in 12-gauge and two also in 20. This model retails for sub-£500.