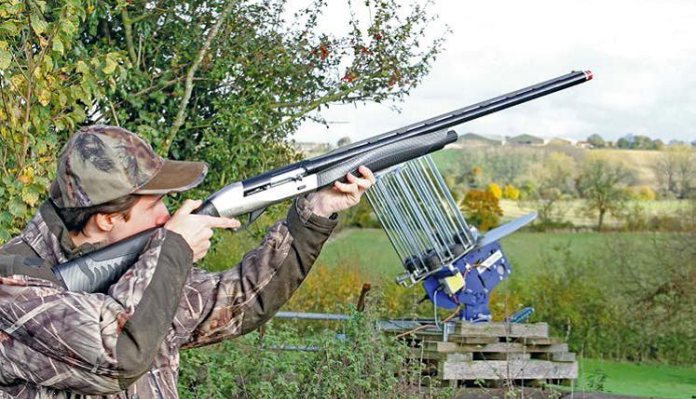 When one thinks about a semiautomatic shotgun, you almost certainly envisage a game or wildfowl gun designed for field use. I tend to forget that there are many models designed specifically for clay shooting, and this new offering from Benelli is one of them. Dare I say that it’s still a very good sporting gun too, the Ethos SuperSport encapsulates the best of Benelli’s innovative semi-auto design and steers it towards success at breaking clays.

What is instantly obvious with this Benelli’s barrel is that it’s ported, helping to really flatten off any muzzle jump and reduce recoil too. There are two lines of six holes/ports on the barrel and they show a 2mm diameter. The first set is located 3.25” back from the muzzle and the second set appears 1.25” behind them. These can be found on both sides of the barrels, so you have a total of 24 ports in the 28” long, 3” chambered barrel.

Forward of the ports is the Crio multi-choke system and the 3.5” long chokes are superbly polished inside and out. They screw in finger tight with the help of the generously knurled outer ring that extends forward of the muzzle, so really handy for a quick change in the field if you need to alter your pattern at any time. The full set of chokes included with the gun consists of Cyl, IC, M, IM and Full.

The top of the barrel shows a 10mm wide carbon fibre rib that dissipates heat and reduces the overall weight really well. It is securely attached to the barrel and there are eight vents below it that gradually decrease in size.

Sighting is achieved with the use of the customary red element at the muzzle and a mid silver bead that’s located 10” away from the action. There is an undulating trough along the whole length of the rib and this helps to stop reflections and to disperse heat haze.

This Benelli semi-auto operates with an inertia system that harnesses the kinetic energy of the gun’s recoil to cycle the action. With fewer moving parts, the gun is reputedly the strongest and most reliable shotgun of its type available. Visually, there is that typical, Benelli brushed nickel finish to the bottom half of the action, while the top half shows a rich blued finish.

Benelli has perfected the bolt geometry that captures the forces generated by the fired case, so as the bolt is driven rearwards, it compresses a powerful inertia spring in the stock at the same time. The spent cartridge case is ejected and the bolt is then re-cocked as another cartridge is chambered. Due to the design of the in-line driven ejector system, there is no requirement to adjust it, and so cartridges with differing pressures can all be cycled with ease.

Another benefit that Benelli shotguns are renowned for, is how clean their semi-auto system operates. During use, most of the powder residue and smoke is kept within the barrel and not allowed to blow back into the action. I like the rotating bolt, which is both strong and secure, as the separate bolt head with twin lugs actually tightens more into the barrel abutments during firing.

The bolt holds open after the last round and is released with an oblong button located on the right-hand side. There is also a drop-down cocking indicator with a red dot in front of the trigger.

An interesting feature to this Ethos model is the 7” long, perspex viewing window within the carbon fibre wrapped, 13” forend. It allows the shooter to instantly check the number and type of cartridges remaining - very handy.

The key to the ease at which shooters can sight and stay on aim (primarily with clays) is down to the Ethos SuperSport’s use of the ComfortTech 3 system, which basically uses the stock construction to reduce felt recoil. This is done by dividing the stock with shock-absorbing chevrons so that it becomes one big recoil pad - brilliant!

Visually, this system looks good as you have inletted within the stock, 24 recoil-reducing inserts that are diagonally fitted from the heel of the stock to the pistol grip.

To support this feature, literally, is the Combtech system. As the name suggests, it is a nice, warm and soft inset cheekpiece, which deadens the impact to the soft facial tissues and reduces vibrations too. The pistol grip has very slight palm swells to both sides, with some nice moulded in chequering. The ComfortTech and Combtech systems are said to reduce felt recoil by nearly 50%, helping to keep you in line and on target. Plus, follow-up shots are 65% faster.

There is also the almost mandatory addition of a shim kit, which allows you to alter the drop and cast to personalise the shotgun to fit your body. It’s worth playing with the kit, as it would be a shame to have all those recoil-reducing benefits, only to throw them away with a stock that doesn’t fit you.

Handling is instantly the major factor that grabs your attention with this semi, it is both light and nimble and has that instant pointability that Benelli shooters rely on. We usually shoot some pattern boards (none left!) to check the pattern density per choke, but today we decided to shoot a few clays, well Jake did. Loading the Ethos is a dream, with its bevelled edge loading gate and well-sprung magazine. Capacity was 2+1 on this non-FAC version and was indicated by a visible inspection slot along the forend.

Also totally synonymous with Benelli semiauto shotguns, is the ultra-smooth and effortless cocking of the action. I have described other semis as smooth in the past but there’s nothing really like a Benelli, and that’s what you are paying for.

Like all guns of this type, being inertia driven means that the shotgun needs a good shoulder mounting so that the system can work correctly. But I have to say, the Benelli Ethos was not too fussed if it was slightly out of the shoulder or at an acute angle for a difficult shot.

We tried some light, 24- gram Blue Diamond 12-gauge loads, which all shot flawlessly, as did all the subsonic loads we were testing at the time. There was no delay in the action, with a speedy bolt and swift ejection being the order of the day. On fast crossers and double clays, the really light recoil was evident, allowing Jake to continue the swing through each clay unimpeded.

With more traditional 28- gram loadings and heavier 32-gram loads, the Benelli shot equally well. None more so than with the Eley Titanium loadings, which allowed Jake to smoke some mini clays at a fair old distance. That’s the Benelli’s forte really, as it gives you the confidence to take shots that maybe you would not normally take. Also, as the recoil is light, you can almost auto-steer that carbon fibre rib and beads onto the target and not have to worry about a reddened cheek.

It’s a Benelli, what else can you say! Yes, some may say it’s quite pricey but you get exactly what you pay for and the big difference between the Ethos and a cheap semi, is that this gun will not let you down. It will pattern superbly, won’t recoil into your face and will up the number of clays you hit significantly. I would camo-clad it and take it squirrel shooting, but that’s just me. I love the ported barrel system, the superb handling and I appreciate how easy it is to change the chokes.