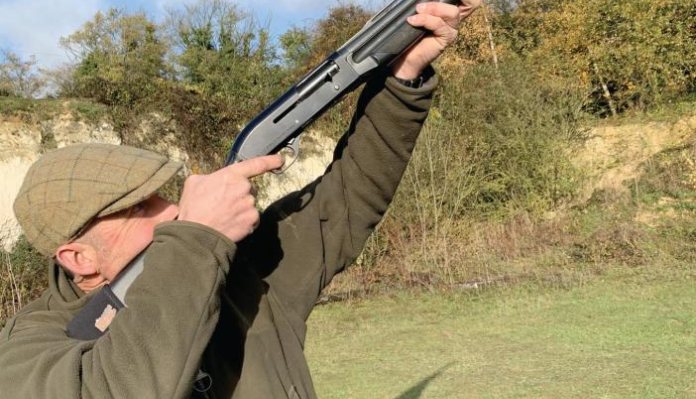 Benelli needs little introduction, they have been producing well-made and durable recoil-operated shotguns for many decades. Their system has changed little since inception; the twin lug, rotating bolt sits in a carrier and is cammed into engagement as the action closes. On firing, the bolt’s inertia keeps the chamber closed, but the recoil energy over comes this, to unlock and cycle the action. Return power is supplied by a spring and plunger in the butt. Compared to the more prolific gas/piston mechanisms, the M1 is a lot simpler in construction, so marginally lighter, as there’s no action bars, forward spring and long piston wrapped around the magazine tube. This has also allowed them to offer a selective version in their M3, that at the flick of a switch allows you to go from semi-auto to manual pump-action operation. More a military and police requirement, although could be useful in Practical Shotgun competition?

They have become the gamekeeper’s gun and in 1999 I joined that club with a high-capacity Section 1 (firearm) format. Beechwood Equipment were the distributers, but now it’s GMK Ltd, as Benelli are part of the Beretta group. The first thing I had to do was fit the extended magazine tube, as I had opted for the 7+1 version, however Section 2 (2+1) is also an option. Mr Moore, my esteemed Editor, reliably informs me that original 20”, iron sighted, high-capacity M1s with wood stocks, were first seen at Practical Shotgun matches in the very early 1980s, well before Remington 1100s became popular.

In those days, I still did quite a lot of rabbit shooting at night, by walking to difficult corners of fields using the wind to best advantage, then, at the last minute, turning on a torch and shooting them one handed as they bolted to their holes. The M1 was a whole new experience for this compared to the old side by side I was used to. It only took a few minutes to realise that it was better to load 3+1, as a full mag made the gun very unbalanced for one-handed use.

Many firsts are or certainly should be memorable in shooting and this definitely was for me. There were some misses to start with, but in the end, form was found, and 16 rabbits were accounted for during my first outing. Since then, my trusty M1 has taken on more than its fair share of farm pests and predators. The most rewarding shooting I have probably had with it is a close tie between bolting rats and early morning carrion crows trying to take the eggs and very young chicks from lapwings nesting in sugar beet fields.

I mainly load 3+1, as previously stated, the larger capacity comes into its own when rabbit shooting from a vehicle or when fox driving, but the extra weight does unbalance the gun considerably. Yes, I have on plenty of occasions shot three pigeons or rooks coming into decoys but have only managed four a handful of times. Generally, most that load high capacity autos to full for shooting over decoys waste a lot of cartridges and actually just end up making birds wary.

My Benelli has fired most types of cartridge, but as one would expect, works with 100% reliability when using loads of 30-grams or heavier, although I believe Benelli recommend 32-grams for guaranteed reliability. Having said this, I have found some 28-grams shells will function perfectly. Although sometimes this can be even down to something as fickle as shot size, # 6s and larger working whilst #7.5s don’t, I still have not managed to fathom that one out!

The stock and forend are made from a tough plastic with diamond cut chequering, which, despite the heavy volume of use this gun has had, still provides a positive gripping surface. This being an early gun, Benelli had yet to develop their Comfort Tech, recoil absorbing butt, that does a great job of taming kick, which is now present on most of their synthetic semis. The forend has a wide, beavertail shape that really fills the hand nicely. I had a butt extension fitted to increase the length of pull to 15½”, as the original is too short for me at 14”. Mine has a 28” barrel, but back then they were available from 24” to 30”. The 28” gives an overall length of 48 1/2” out of the box. The barrel is black or rather was, as opposed to being blued, but the fi nish is wearing a little thin in places now.

From day one, half choke has been used and I have never seen any reason to change, it did come with a set of five, as does the M2 today, but I believe the current M1 only comes with three supplied. The barrel is chrome-lined and still sparkles like new, after a couple of patches have been pushed through it. This, despite after probably around 50,000 cartridges having been fired down it. The 8mm, ventilated rib is distinctive with fl at sections front and rear. Originally, it was finished with a high bead, but that came off years ago and was replaced with a traditional brass spherical-type.

Every year towards the end of January my M1 get stripped right down and given a thorough clean, ready for the serious predator and pest control work to start after the driven game season has finished. In all the time I have owned this gun, it has only gone wrong once, when there was a large build up of muck within the bolt, causing the firing pin to stick, but this was easily rectified with a deep clean.

My M1 has been a great friend and incredibly reliable workhorse over the years; when I purchased it, money was tight, and it did stretch me a little. But looking back on that investment today, it really has turned out to be a very inexpensive shotgun. I am hopeful that it will last me out, but should the dreaded day come when a replacement is needed, then at the moment there is only one gun I would go for to replace it, that would be another Benelli, although I suspect it would be an M2 or whatever the equivalent will be then.