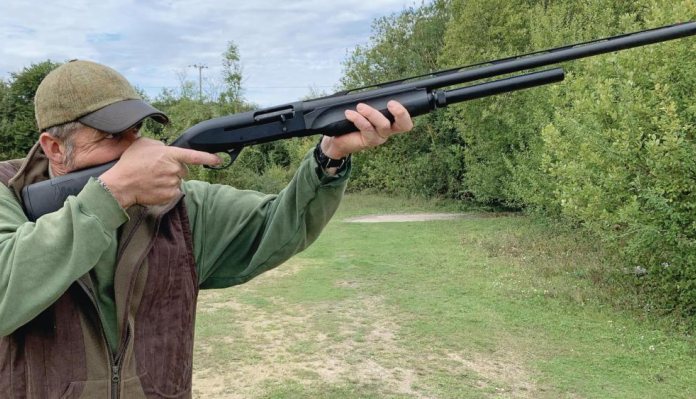 Benelli is a manufacturer that should need little introduction, they hail from Italy and have been part of the Beretta group for several years. They are best known for their inertia system that uses recoil rather than gas to cycle the action on their semiauto shotguns. This system was developed over 40 years ago and has barely changed since then, the old adage of ‘if it isn’t broken don’t fix it” holding true.

There have of course been some subtle changes as a result of advancements in engineering and steel/ alloy manufacture. However, the recoil harvested from firing a shot does what it always did and is still proving to be more reliable than gas-operated guns all these years later. Indeed, Benelli’s inertia system does sometimes struggle with lighter loads and my old M1 Super 90 never did and still does not like the majority of 28-gram loads.

The test gun, supplied by distributer GMK, is the M2 FAC version (7+1). It is all black with a synthetic Comfortech stock and forend. The barrel is chrome lined and has an 8mm wide vented rib which is raised in the distinctive Benelli way. It is finished off with a high visibility bead. There are three options of barrel length which are 24, 26 and 28”. The test gun came fitted with the latter.

The M2 comes with a set of five chokes from full to improved cylinder, however, ¾ and full are not proofed for steel shot. No doubt with the phasing out of lead shot over the next five years all the manufacturers, including Benelli, will be looking to address this so that all the chokes can be used with steel shot if desired. The chamber is for 3” (76mm) cartridges but remember this does not necessarily mean it is suitable for magnum loads unless stated the gun has been proofed for them.

Although this gun is the all-black model, there are two camo versions offered. The Max 5 is a wetlands pattern and APG is a woodland based one. There are practical and target shotgun models in the range as well as a Ceracoted version. There are also some left-handed section 2 (2+1) versions available in 12 and 20 bore with the latter weighing 2.6kg.

The test gun weighed in at 3.2kg and showed an overall length of 49”. The length of pull (LOP) was 14 1/2”, with the actual stock measuring 13 1/2” and the gel-filled Comfortech pad adding the additional 1”. There is an option for a 1.3” recoil pad if required but despite this, many shooters still find the stock too short, it certainly is for me.

Luckily a chap called Steve Barnes has developed an extension insert that fits between the stock and the pad that will give you an additional 16mm/0.62” LOP. It is well worth a look and I had one to review at the same time as this M2.

It made shooting much easier for me as stock length was closer to what I require. An alternative option would be to have a gunsmith make a bespoke extension up but this can be expensive. A set of shims is provided as well, making small adjustments to the cast and drop of the stock possible.

The forend is slim but there is still plenty to get hold of. The chequering is a slightly different version of the common diamond cut and gives a positive gripping surface particularly with wet, cold and muddy hands.

The safety catch is located to the rear of the trigger guard, changing state with a positive feel and audible click. The design is a definite improvement on that of the old M1. The trigger pull is positive and shows no creep, breaking at 4lbs.

Standard operating features are found on the M2 with bolt hold open, when no cartridges are in the magazine and the bolt release. The bolt handle has no sharp edges, is grooved on the front face and does not stick out too proudly of the bolt so as to catch on anything.

Most of the testing was done whilst I was doing my gamekeeping duties and pest/predator control. As expected, performance was flawless with some very memorable shots at crows in particular. Using this shotgun felt like I had owned it for as long as my old trusty M1 and dare I say it I actually preferred it. The gun points naturally at the target and despite those not familiar with Benelli’s may think, the raised rib is so well integrated with the overall design it works very well.

I tried a wide variety of cartridge through it, with loads ranging from 24 to 36-grams, all cycled without any issues, which was particularly pleasing especially with the lighter ones. The heavy loads did not give anything that could be described as unpleasant recoil and did not have an effect on handling, even when bringing it into the aim for a second or third shot at the same target.

The M2 feels and looks every bit as tough as the M1 ever did. The Comfortech design is an improvement over the older gun and although the forend is slimmer it is still solid.

It is not very often I test a gun and don’t find a few niggles but the Benelli came very close. I feel it would be better if there were more options of stock length available and to be truthful considering how awkward, not to mention expensive, it is to extend the stock length with a gunsmith it is a little disappointing that another individual has had to sort this issue out. Other than that the M2 is great, and having used the test gun for some time my mind is made up. When the sad day arrives and my M1 has to be retired, the M2 will replace it. Price-wise, at £1445 they are not inexpensive but if used every day for work, they can last over 20 years, as my M1 has so far. Consider it an investment in a quality tool that will stand the test of time.