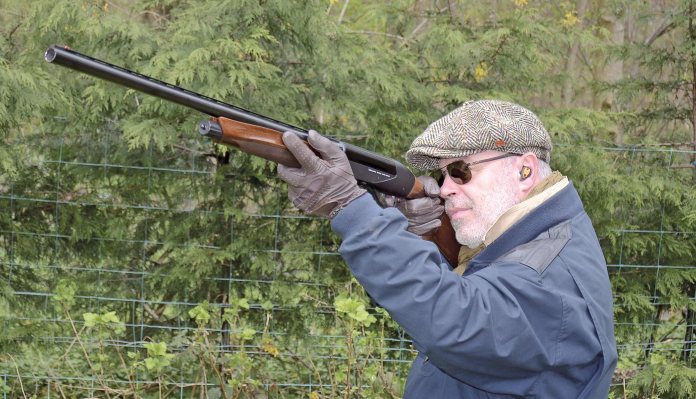 I’ve said it before and I’ll no doubt say it again, but I like Benelli semi-autos. No, I really like Benelli semi-autos; the day I sold the one I used to own was a dark day in the annals of history and it only went because I got fed up of being pestered to sell it. Yes, there are plenty of other semis out there that cost less and fair enough, not everyone likes inertia driven shotguns. But when it comes to style, handling and unerring efficiency you won’t find anything to touch them.

The one thing about Benelli is that no matter what you want a semi-automatic for there’s a shotgun more or less specific to that need. Beauty is, besides the gun being able to carry out your pre-defined task, it will be more than accomplished at doing other things, clay breaking being one of them. And this tends to be due to the fact that the Italians, like the rest of Europe regard a semi as a more than acceptable game gun even on the most prestigious of shoots. Equally, virtually anyone who’s been shooting pigeon over in Argentina will more than likely have used a trio of Benellis, as a rule 20g.

The other aspect of Benelli the manufacturer is that, whilst they’re now part of the great Beretta Empire, they always seem to take their own direction. For confirmation you only have to visit the company’s stand at IWA where that year’s concept guns will be on show. Granted they’re not always the most practical, but these oneoffs are proof as to what can be achieved, certain of these at times radical perception often finding their way into Benelli’s production models albeit in a slightly toned-down guise.

One of Benelli’s most up-todate models is the Raffaello, a range of single-barrelled semis that are in the main game guns or more general all-rounders. Slightly more conventional in looks although still maintaining Benelli’s signature traits, the new Black now takes the model a step forward in subtle but still overtly Italian looks and the latest technology.

On opening the new style Benelli case, for once a sensible shape that actually stands up, the two most noticeable features are the soft gel insert that forms the stock’s comb and the Progressive Comfort recoil pad. A vented soft rubber buttpad the main mechanism of this new recoil reduction system is located within the stock itself so none of the usual exposed pistons. Designed to interpret the amount of recoil it senses, in conjunction with the gel comb, the two together ensure muzzle flip is kept to a minimum and that all the shooter actually feels is a gentle bump even when using more powerful hunting loads.

Apart from these new additions the stock takes the standard game design complete with an open, elegant grip that features two broad, stylish panels of checkering and complete with alternative stock shims and sling swivels. Moving forward, the long, slender forend that’s kept in place by a strongly sprung mag cap has two unobtrusive finger grooves and matching checkering. Intended to enhance the Black’s looks, the profile also promotes a secure hold with the facility to keep the gun fluid in movement when the birds start flying.

In the case of the gun on test, the 28 inch gloss black, three inch chambered barrel was fitted with the familiar Benelli red bead and a 7mm vented rib that tapers down at each end. Along with this the Black comes with a full set of matching Benelli flush-fit chokes, all five of which throw some of the most uniform and regular patterns of any proprietary choke tube.

The Black part of the Raffaello’s name derives from the alloy receiver of which the low half is matte black. The gloss section is the part that, with the gun disassembled and the bolt forwards, lifts off giving the owner uninterrupted access to the lockwork and the facility to lift the bolt clear. This two-piece design is now one of Benelli’s more favoured styles and has proven itself both in looks and practicality whilst the alloy construction means its one of the lightest semi-auto receivers currently available.

Contained within is Benelli’s familiar two-piece rotating head bolt. Now fitted with a new, more efficient cam follower, instead of the familiar gas operated systems used by others, Benelli utilises the kinetic energy generated by each shot to perform the cyclic process. This means the bolt is driven backwards, the action extracting the empty from the chamber, the rotating head spinning the spent case cleanly and efficiently out through the ejection port. As is usual, the cross-bolt safety is located in the rear span of the black trigger-guard, a chromed blade contained within and housed as far back as is physically possible. On the right side, the bolt-lock latch protrudes alongside the guard’s forward span whilst a far smoother and ergonomically more efficient, lozenge shaped bolt release is sited just below the port.

Size-wise the new Black should fit most shooters, the dimensions as near universal as it gets. With the 28 inch barrel fitted the Black measures an exact 49 inches in length and weighs in at a precise 7lbs. Drops at comb and heel are 11 5/32 inches and 2¼ inches, whilst length of pull to the 4lbs 10oz breaking, crisp, creep free trigger is 14 3/8 inches. Balancing directly beneath the point where the head of the cartridge and bolt-head come together, even before you’ve loaded the new Black, the lithe, smooth handling feel is more than apparent. Similarly, a moment or two with the Arrow Laser Shot confirmed that, like most Benellis, the new Black shoots flat.

Not only is this my most favoured attitude with any shotgun, it substantiated that the Black would be looking exactly where I would. It also meant that, at least from my own perspective, the Black would fit and feel exactly how it should no matter what the target. Fitting ¼ choke and loading up with Eley’s 28g VIP Sporting shells, the Black was vaporising clays from the moment the first one flew. The gun mounts in a thrice, the muzzle exactly where it should be whilst the gel comb and recoil reduction system meant even Eley’s most potent clay loads seemed as nothing although my score card confirmed otherwise.

Retaining ¼ choke but shifting to 36g Eley VIP Game, the summer weather had jolted Huntroyde’s pigeon into increased activity along with the latest batch of juvenile tree rats, their innocence of danger always a delight; the Black excelled. Once again, the Progressive Comfort system meant prolonged periods of shooting more powerful loads had no effect, whilst stoking up with three rounds meant the Benelli could perform at its best.

Numerous manufacturers make big of how fast their semi-autos recycle which more often than not is nothing more than a sales gimmick. As we all know, the speed is determined by how quickly the shooter can move their finger, but no matter what anyone says or claims nothing comes close to a Benelli when you need to get three shots off in rapid succession, all the while the muzzle remaining true to its target.

There’s no such thing as a cheap Benelli, but at £1650 for the Raffaello Black irrespective of whether you opt for the 26, 28 or 30 inch barrel, after you look at what you get for what you’re paying this new gun makes serious sense. Whether you’re a clay breaker, duck buster, pigeon basher or a lone walkedup shooter, the new Black does it all not so much with consummate ease but with a well-earned, deserved arrogance.