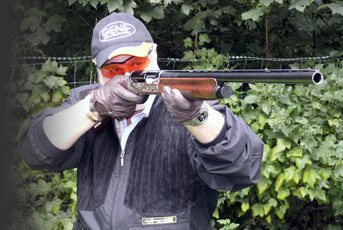 If it wasn’t for the fact that it’s still unacceptable to shoot game with a semi-auto in the UK; the pegs would be dominated by Benellis. With their Raffaello Legacy being the epitome of Italian style and efficiency. One of the company’s newest designs, where the Legacy differs is that unlike Benelli’s competition versions that incorporate the ComforTech recoil reduction system, the bang stops with you.

A Game of Two Halves

Arriving complete with a set of flush-fit multi chokes and additional spacers, the two things that instantly strike you are the quality of the woodwork and the two-piece receiver. Brushed Ergal aluminium engraved with game scenes depicting flighting ducks and driven pheasants are complimented with rose and scroll whilst the upper, removable section is a deep, blue/black finished steel, the richness of the surface flowing into the 28”, steel-proofed barrel and 8mm vented rib.

The two-piece receiver offers some noticeable advantages although until you’re fully acquainted with the gun, assembly can seem unusual. With the bolt in battery and your hand firmly clamping the two halves together, fit the barrel in the usual way, drawing the bolt rearwards to fully seat. However, don’t remove your hand until you’ve slid the forend into position over the magazine tube and screwed the mag cap into place.

Disassembled with the top of the receiver removed, access to Benelli’s famous rotating chromed bolt and internals are laid out in front of you, the only main component still out of sight being the action’s spring situated within the stock. Their inertia system is simple; the bolt sits in a carrier and is cammed into battery. On firing the recoil forces push against the bolt, which cannot move. This energy then passes back into the carrier, which after the required dwell time moves back and rotates the bolt and opens the action. No pistons and little fuss, with a very ammunition tolerant mechanism that perhaps is not well at home with very light loads.

Adding even more to the Legacy’s looks is the AA-Grade walnut furniture. Soft-lacquered, the butt and slim line forend are well figured, with close cut checkering gentle on the hands. Similarly, the radius and angle of the semi pistol grip should accommodate most adult hands, only the merest palm swells emphasizing the Legacy’s game-orientated purpose.

Like most Benellis the Legacy shoots slightly high, a trait that can be altered with the extra spacers although familiarisation with this characteristic can be quickly established. If I had a small concern it’s the trigger weight of 5lbs 8oz coupled to a pull length of 14 5/16th. Crisp on the break, it does seem a tad sluggish when compared to the gun’s overall, high speed performance.

The bolt release occupies the usual position on the right side of the receiver just below the loading gate as does the magazine cut-off a fraction further back whilst the usual cross-bolt safety is to the rear of the trigger guard. Weight-wise, since this gun is designed to shoot the heavier game loads, the 7lbs 4ozs goes some way to reducing felt recoil, whilst the stock dimensions of 1 7/16th and 2¼” drop at comb and heel send surplus energy back into the shoulder pocket via the soft rubber pad.

Leaving the factory fitted Improved Cyl choke in position and shooting a variety of 2¾” and 3” Express competition and game ammo, the Benelli never disappointed. Once the pattern placement had been calculated allowing for an open view of each and every target, an unofficially scored round of Bond & Bywater’s 30-bird layout soon proved if you want to shoot 60 clays and hit all bar two and have an entertaining time in the process, Benelli’s Legacy is the way to go. Similarly, a chance encounter with some late evening pigeon more than proved its worth as a highly competent slayer of woodies.

Unlike many other Italian semis, what set’s the Legacy apart are both the distinctive looks and the deletion of unnecessary additions. If you want to add scopes or any form of sighting arrangement, there are other models within the range to suit. Where it wins out is that it was designed to be a game gun, not a ‘Jack of all trades’ and exactly how the Italians like their bird guns to be.

Here in England, apart from the fact shooters are more likely to buy the Legacy as a distinctive clay breaker, the gun’s main appeal will be to the dedicated pigeon shooter or inland wildfowler, or any lone shooter who places personal enjoyment over stuffy traditions. An alternative to the usual fare and more or less the exact same price, where synthetics and camo patterns usually rule, Benelli’s Raffaello Legacy would definitely make for a refreshing, elegant, quick fire option. That said, I’m a Benelli fan so what would I know?