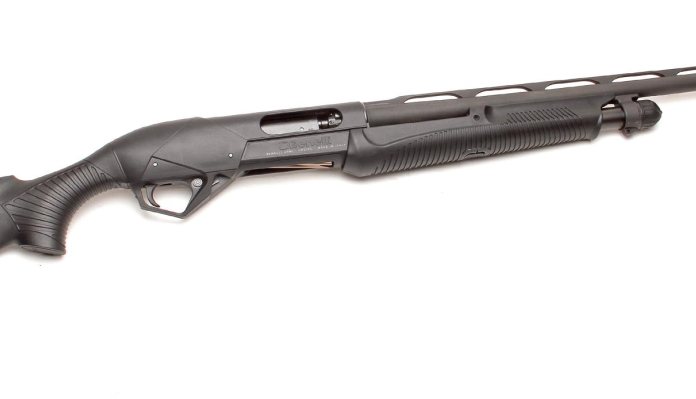 I was rather taken with the Benelli M2 semiauto shotgun I tested recently, as it combined a well thought out shotgun and excellent build quality.

The pump action Supa Nova is also made in the same vein and is a real treat to shoot and performs very well. It’s also very big! It’s typically Benelli or Italian styling; flash but with some good reasons, as the racy stock design is very comfortable and aids in correct hold and operation and the sighting layout and balance allow a very swift second shot for a pump action design.

There are two camo versions, APG and MAX 5 patterns but this black synthetic model would be ideal as a dual wildfowl or pigeon hide gun.

They weren`t holding back with this design and it takes a while to take it all in; there`s a lot going on. The rear stock is very organic and it seems to envelope the rear of the action but is in fact separate. You have spacers at the action/pistol grip join to adjust for cant, drop and cast.

The pistol grip is very well shaped and long-raked for a good unimpeded grip and has some weird looking ribbed areas for extra grip. Gone is the traditional chequering or moulded stippling – here you have a proper additional gripping area. The thin ribs extend from the side, right around the front of the grip and are deep enough to actually give a benefit, unlike some poor shallow chequering, good idea.

Further back, the design continues to amaze, as the slightly raised comb has a rubber insert to the top that is soft and warm compared to the rest of the stock and welcome on a windswept foreshore and helpful with 3.5-inch mag loads. These rubber inserts are mirrored as a design down either side of the stock, which are broad chevrons pointing down and diagonally towards the pistol grip. There is also a very nice soft black rubber recoil pad that does work well and takes most of the recoil off and away from your face.

The forend too has been heavily designed from the same black high-impact synthetic stock material, it’s tough and heavy but gives the Supa Nova that no-nonsense stance, which gives rigidity as well as a hardwearing nature. It has a lot going on and has deep recesses for a good grip at the front of the forend and a second section at the rear for a differing hold.

You have the same deep, ribbed gripping area aka ‘chequering’ but much better and gives that radical look too. You also have a subtle lip to the end that stops your hand slipping forward and the back section is also slimmed down to keep your hand in place as you pump the action and stops it slipping back over the action. It also slightly covers the action and so blends in well. Little design features that make a difference.

The action is part alloy and part synthetic at the rear and has a superior bolt system that is both smooth and very positive to operate. Again, a highly scalloped design with a large synthetic, almost ‘glove’ rear section that incorporates the trigger guard as well. The front section is more conventional but has no provision for fitting a scope, which is a shame. The bolt itself has an all black finish and is a two-part construction type with separate head section. This has thin elliptical locking lugs that securely locate into the back of the barrel. You have a large single claw for extraction and a long spur set into the receiver side wall for a positive ejection. The loading ramp has a gold/bronze finish.

The barrel is 28-inches but actually measured 27.5-inches and is chambered for 3.5-inch cartridges of magnum proof, so good for everything you can throw at it. It’s a multi choke system with flush fitting choke; three are supplied that from the pattern boards produced very good, even patterns on test.

The overall finish of the barrel mimics the overall black appearance of this model, with a matt black tough exterior. The full-length rib is slightly raised and has a hump backed gait from the rear, with eight vented sections. This allows a great ‘lead’ into the eye and is further enhanced by a serrated ‘V’ cut slot in the plastic section at the rear of the action that guides and aligns your eye down the rib—nice. This rib is smooth and 8mm width and has two beads; the first is half way down and is sliver with a front bead being a red day glo type, so again, good alignment and visibility.

These centre around that synthetic ‘glove’ at the rear of the action. This synthetic section incorporates the trigger guard and again is typically Benelli with an unconventional shape and style, with thick angular profiles but with a good access to the trigger blade, even with a gloved hand. The trigger blade is smooth and deeply curved with the safety button, cross bolt type, cited in the trigger guard. In front of this is a small metal lever that is the bolt open (or hold open) catch that releases the bolt to allow a round to be taken out of the chamber.

It’s heavy; that’s the first thing you notice. At 3.5kg, you feel the weight but a sling fitted to the moulded sling swivel eyes help shoulder the weight when walking to the duck blind or pigeon hide. Despite this, the Supa Nova is very well balanced and not at all muzzle heavy and so its weight feels well distributed. I personally like a little heft in a shotgun designed for real world hunting and so it is built to take abuse and also, with those 3- or 3.5- inch goose loads, is capable of quelling that extra recoil too.

Also, you notice that with this Benelli design you have a very easy and smooth pumping operation that genuinely has a speedy second shot capability. As the trigger is pulled, you have a pump assisted decock, so the forend almost moves on its own to get that second shot in quick. The soft rubber cheek insert too is appreciated and that squishy recoil pad does really work.

Okay, to the boards; set up at 30-yards and with the ½ choke fitted. Your usual culprits I am afraid, I will buy some differing brands and loads to mix it up for the continuing tests. I did shoot some 3-inch and one 3.5-inch Rem mag load but stupidly left the pattern boards in Scotland but suffice to say the Supa Nova shot effortlessly with a very good even spread of shot. To prove this fact, look at the pattern boards I brought home!

The Gamebore Clear Pigeon is a great load and always a steady performer and here, using the ½ choke fitted, I had a total of 207 No. 6 shot pellets hitting the 30-inch board, 115 of which were in the outer quadrants and an even 92 pellets in the inner 15-inch circle.

An Eley load and this time, the Grand Prix HV and this with the ½ choke placed a 32-gram load of 252 pellets No. 6 on target. Evenly spread across the board, I had 165 pellets in the outer sectors and 87 within the central portion.

Just to see how good that Supa Nova barrel was I tried some Eley VIP Sporting loads. Here 28 grams of No 7.5 shot gave a 345 pellet total count of which 208 were in the outer portions and 137 within the central 15-inches. Dense and very well distributed.

Finally, a good Pigeon load with the Eley Pigeon Select that totalled 247 No. 6 pellets in a 30-gram load and superbly dense even 111 pellets in the inner sector spread 27, 28, 27 and 29 pellets!! Also, 136 pellets in the outer portion of the board, so nothing will escape.

Look past the un-orthodox looks (although that’s why Benelli fans buy them) and underneath you have a very strong, capable and good patterning pump action shotgun. It has an instant appeal and the good patterns and versatile load use allows this Supa Nova to be used as a true all-round shotgun, for any purpose.