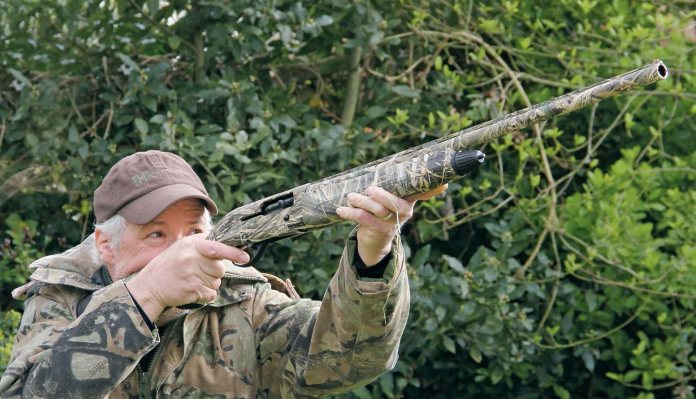 I tested an A300 a couple of years ago and found it a very capable and a smooth firing semiautomatic shotgun at bargain price for a Beretta. Made in Italy, this gas operation semiautomatic 12g is very good value for money at £1075 for the standard synthetic model, and this model in Max-5 camouflage is £1145 and worth the extra money. It is my favourite, as it is as good in a pigeon blind as it is on the marshlands after duck. For not much more than some Turkish guns you get a bona fide Beretta; I know what I would choose.

You have a choice of 26-, 28- or 30-inch barrels in 12-gauge only but what a lovely gun this would be in 20- or 28-gauge for smaller shooters or woodland vermin use. This Max-5 model on test has Beretta`s HPS Steelium barrel steel, so proofed for magnum and steel loads alike, and comes with flush fit chokes.

Action-wise the A300 has everything one wants from a semi-automatic shotgun: sleek lines, lightweight, ultra-fast cyclic rate coupled to reliable feeding and simple but well laid out controls. It is machined from an alloy block to save weight but has incredible strength and integrity. You have two integral and recessed scope mounts for scope mounts, making the A300 doubly handy for red dot or a spot of scope use and slugs.

Instead of the all-over black anodised finish you have the Max-5 camouflage pattern, which is primarily a reed-based pattern, but is idea for straw bale hides and almost any terrain as its break-up design is very disruptive.

The bolt, on the other hand, is polished and blued with a serial number inscribed into it. This also houses the single claw extractor and an insert ejection spur set into the wall of the action and is removable by a rolled retaining pin if it gets damaged.

This non-rotating head design is operated by a medium-length grooved bolt handle, so no problems cocking the action.

Controls on the action are also quite small but work well and are all you need. There is a magazine block button at the base of the polished bright load ramp which blocks the magazine for a safe and speedy unload when it is pushed inward as it locks the follower shut.

A small blued, polished bolt release button to the right side of the action and cartridges are loaded via the polished steel ramp. The trigger guard has a good elliptical shape to it, not too large or small, and the trigger blade is bright and smooth-polished.

The safety sits in front of this trigger, is circular in shape, and when pushed left is in the fire position, while right is safe. Also, it only works when the action is cocked, so blocks the trigger unit and not just the trigger blade as some push button designs do. The whole trigger and safety can be dropped from the action bottom for cleaning.

These 28-inch barrels are just about right for handling, manoeuvrability and performance down range, although 26- or 30-inch lengths are available.

Naturally, they are made from Beretta’s Steelium alloy which gives a very high tensile strength but also good uniformity, i.e. roundness of the bore along its entire length, and also have extended life too. The rib is smooth and 6mm in width and nine shallow events on its underside culminate in a single red dayglo cylinder at the muzzle.

You have a multi choke system which is flush fitting on this model. Only one choke is supplied, ½ or Modified. That’s fine as that’s probably the best all-round choke anyway and these Beretta chokes are very well-made and highly polished to create a smooth transition from barrel to target without deforming pellets.

The chambers are 3-inches, so good for all loads, and are HPS tested, so steel shot is no problem, doubling the usefulness of the A300 Max- 5 semi-auto for fur, feather and game and wildfowl.

Being a gas operated semi-automatic, the A300 has a very good tuned position of an inch diameter that has a self-regulating valve to make sure that differing loads and shot weights function correctly. Gas vented from three-barrel ports pushes this piston onto a metal collar around the magazine tube which has a single steel bolt operating rod sending it rearward to cycle the action.

The stock is your typical polymermoulded synthetic with a Sporter type profile, so a medium amount of cast, quite a low comb and no pistol grip palm swell. Thus, if you fancy you can shoot it from both shoulders.

In keeping with the action and barrel, the entire stock is clad or dipped in the Max-5 camouflage pattern with only the visible join of the pattern on the underside of the stick. Very nice, and quite smooth but the forend and pistol grip has moulded-in checkering, which is fine but is ever so slightly raised for grip.

The pistol grip is narrow with no palm swell but plenty of space for a large hand, and this stock has a large insert black spacer and then the recoil pad for a good 14-inch length of pull. The forend is long at 12-inches with shallow finger grooves to both side at the top and a full covering of checkering with panels to the side and underneath, so it’s easy to hold the A300 Outlander from any contorted position in a hide.

Being a synthetic stock semiautomatic and not wood the Outlander feels quite light for its 3.25kg catalogued figure. That is primarily due to the good balance, Beretta semis always handle well. With its 28-inch barrel length it is neither barrel- or stockheavy and thus comes to the shoulder and swings with ease.

From 28-gram to 36-gram loads, this A300 felt like it was shooting a load 25% less in weight. Below 28-grams, dependent on speed of the pellets, there were a few hiccups, but I did have some Game Bore Blue Diamond 24- gram loads that shot very well.

The A300 came fitted with a half choke so off to the pattern boards. Steel for ducks etc., and the best shot were the Hull Steel Game Extra. The half choke is perfect for steel shot, as it shoots tighter patterns. A total of 151 FE3 from the 32-gram load pellets hit the boards with 63 inner strikes and 88 outer hits. Very easy to shoot on the shoulder and a great even pattern, really good steel loading.

A good Pigeon load was the Superfast Pigeon with its high velocity shoot. A total from the 29-grams load was 230 No 6 shot within the 30- inch, 138 pellets in the outer sector and 92 inner strikes, even and no holes, perfect.

Old classics like the Eley Grand Prix HV and 32-grams of No 6 with a fibre wad gave a split of inner 87 and outer 149 for 236 total, hard hitter and reliable. Again, no problems at all and little recoil.

Finally, the Hull High Pheasant Extremes just work with anything and are a great do it all cartridge with the Xtreme shot for extended range. With the 32-gram No 5 shot load, recoil was easy on the shoulder and on the boards. We had 181 total strikes with a very healthy 70 inner hits from the No 5 shot and 111 outer with lovely even patterns.

I was impressed with this A300 Outlander especially due to the light recoil even from some 36- gram loads. It was reliable, it’s cheap by Beretta standards, and you are not missing out on any features either. Handling for a semi-automatic feels natural with good patterns to boot, it’s very hard not to like this A300.